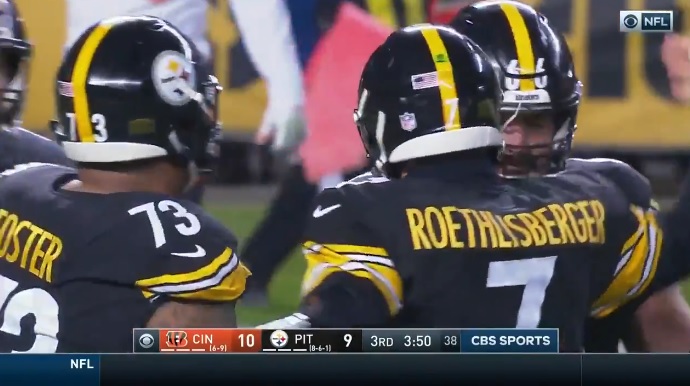 The Cincinnati Bengals without Andy Dalton, A.J. Green and Tyler Boyd still managed to give the Steelers a fight to the finish. The Steelers were missing a few stars of their own, Antonio Brown, Sean Davis and Vince Williams, it was a new star in Matt McCrane who kicked the Steelers to victory. The Steelers’ new kicker made three field goals in his debut as the Steelers squeaked out a 16-13 victory.

After snoozing through the first half, Ben Roethlisberger and the offense finally woke up mid-way through the third quarter. With just over 100 yards of offense and three points at the time, Roethlisberger almost matched the team’s entire out in just three plays as he put together a 74-yard drive that resulted in the team’s first touchdown of the game. JuJu Smith-Schuster took a screen pass from 11-yards out to tie the game at ten.

Without Brown, the Steelers had to rely on other playmakers to step up in the offense. With increased attention on Smith-Schuster, the recently named 2018 team MVP recorded just 5 receptions for 37 yards and 1 touchdown.

James Washington was the catalyst on the Steelers’ first score, catching a 47-yard pas down the sideline. The rookie wide receiver had a nifty out and up double move that gave him the separation to come down with the catch. Washington finished with three receptions for 64 yards.

James Conner also returned from a three-week layoff after dealing with a high ankle sprain. In his return, Conner finished with 64 yards rushing and another 30 receiving yards.

The Bengals surprisingly got on the board first. Their score came via a pass, but now from Jeff Driskel but from Roethlisberger. The quarterback’s errant pass was intercepted by Shawn Williams who returned the interception 58 yards to the house to give the Bengals a 7-0 lead.

Defense would be the name of the game early as Williams’ interception was the only trip either team made into the end zone as the Bengals surprisingly marched into the half up 10-3. McCrane made his first field goal as a Steeler, punching through a 39-yard field goal as time expired.

The Steelers defense did their job and should be credited heavily for their part, limiting Dreskel, Joe Mixon and Giovanni Bernard.

While Mixon and Bernard rushed for over 110 yards, their contributions did little as the Bengals managed just six offensive points.

Driskel was sacked four times, once by T.J. Watt, twice by Cameron Heyward and then collective half sacks by Stephon Tuitt and Anthony Chickillo. Watt’s sack was his 13th of the season and he is the first Steeler to record 13 sacks in a season since LaMarr Woodley had 13.5 in 2009.

With the Browns and Ravens game still ongoing, the Steelers’ post season fate is still to be decided. Should the Ravens win, the Steelers will have to rely on an unlikely tie between the Colts and Titans.