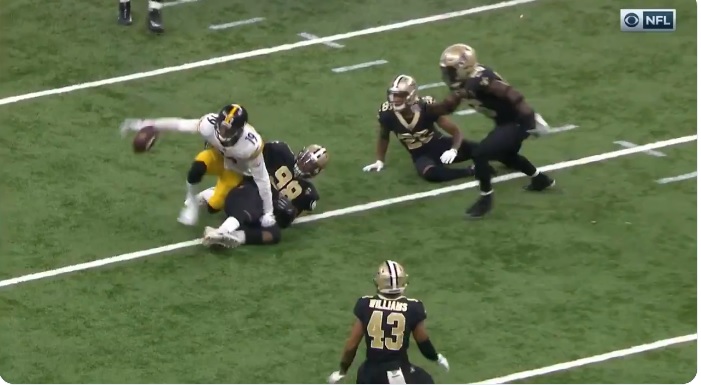 With everything on the line, the Pittsburgh Steelers showed flashes of hope but critical mistakes down the stretch and the trio of Drew Brees, Michael Thomas and Alvin Kamara was too much to contain for sixty minutes as they fell 31-28 to the New Orleans Saints.

Ridley’s fumble came with the Steelers up 28-24 driving in New Orleans territory and the Saints looked to add a field goal to trim the lead to one but L.J. Fort came up with a timely block to negate the attempt.

The Steelers would not be so lucky the second time around, attempting a fake punt on their next possession but were stopped a full yard short on their own side of the field. Surviving a 4th and two and a third and 20, Brees was able to find Thomas on a one-yard touchdown pass with just over a minute remaining.

The Steelers would get one last chance but a fumble by JuJu Smith-Schuster ruined any hopes of a late comeback.

Down ten in the third quarter Ben Roethlisberger found Antonio Brown on a three-yard touchdown pass to draw the game 24-21. It was Brown’s 14th touchdown catch of the season, setting a new career and franchise high. Roethlisberger was able to lead a nine-play, 75-yard drive after the Steelers feel behind by 10 after halftime.

Brown took over from here as on the Steelers’ ensuing drive. First, he barely missed what would have been one of the most unbelievable catches this season by half a foot in the corner of the Saints’ endzone. A play later and the veteran wide receiver made up for it, catching a 20-yard touchdown pass against double coverage to give the Steelers a 28-24 lead.

Brown finished with 14 receptions for 185 yards and two touchdowns. Roethlisberger also had a marvellous game, throwing for over 300 yards and three touchdown passes.

Sunday’s game did not come without its fair share of controversy.

The game was surrounded with controversy from the get-go. Joe Haden was flagged for pass interference in the end zone on fourth and one, a play in which Haden made little to no contact at all. With the ball on the one-yard line, Mark Ingram was able to punch it in to give New Orleans a 7-3 lead.

The Saints’ second touchdown was not without more controversy. Morgan Burnett was called for pass interference on tight end Ben Watson, giving the Saints a new set of downs at the Pittsburgh 16-yard line. Three plays later and Alvin Karama scored from eight yards out, giving the Saints a 14-6 lead.

With their backs up against their own end zone, Roethlisberger was able to execute a drive for the ages. A 15-play, 97-yard drive that took up over six minutes saw the Steelers tie the game at 14 after a three-yard touchdown pass to Jaylen Samuels and a successful two-point conversion pass to Eli Rogers. Roethlisberger was 3/3 on third down on the drive, with two conversions going to Brown.

From there Kamara took over as the Saints doubled down on points. With just 31 seconds remaining before the half, Kamara took a pass 31-yards to put the Saints up three before the half. Getting the ball back after halftime, Kamara was once again the center of attention taking a swing pass 42-yards into Pittsburgh territory before finally diving over the top on a one-yard touchdown to give the Saints a 24-14 lead.

Kamara added 105 total yards and two touchdowns. Kamara and Thomas were the two biggest factors as Thomas also finished with 11 receptions for 109 yards and one touchdown.

The victory drops the Steelers down to the number eight seed and out of the AFC playoff picture. Mike Tomlin’s team will have to defeat the Cincinnati Bengals at 1:00 p.m. EST and hope that the Cleveland Browns can defeat the Baltimore Ravens.