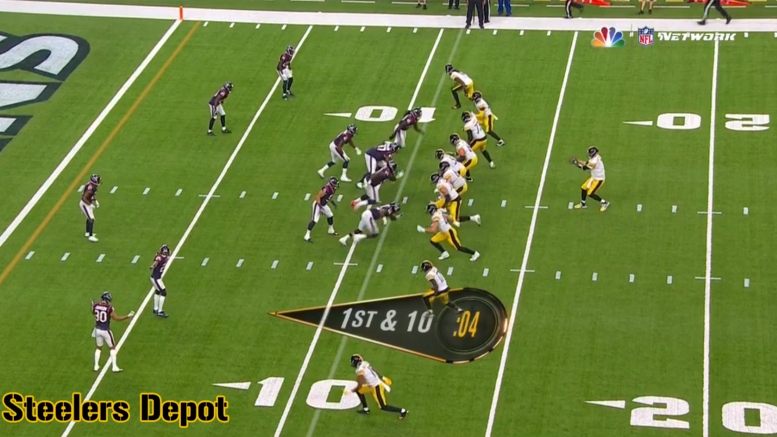 While the introduction of the five-wide receiver package, which the Pittsburgh Steelers used somewhat extensively on Sunday, is relatively new—they had only used it on one other snap this season, and possibly had never used it under Todd Haley—the five-wide look, with all eligible targets lined up in receiving positions at the line of scrimmage, is something the team has done a lot this year.

They’ve run this look out of just about any set imaginable, even out of 23 personnel if I’m not mistaken, but is most frequent when they use their 01 package, featuring four wide receivers and a tight end, which is usually Vance McDonald. The base 11 package with a running back replacing the fourth receiver also gets a lot of five-wide looks.

A lot of fans don’t particularly care for when the Steelers do this, because it does limit an offense’s options in what they are able to do—you kind of can’t run the ball if nobody is in the backfield—but Pittsburgh has been successful running from empty sets. This statistic is a couple of weeks old, but according to ESPN, the Steelers ranked eighth in the league in averaging seven yards per play on snaps out of empty sets.

And they have done it enough this year to get New Orleans Saints Head Coach Sean Payton’s attention. He was asked about that look during his pre-game press conference in anticipation of Sunday’s game in which they host the Steelers.

“They carry that package. They will throw tight end screens from it. It’s pretty challenging”, he said. “They spread the field well. [Ben Roethlisberger] sees it well. I think those guys, Ben and [Mike Tomlin] and that staff have always done a good job of spreading you out. I have seen a lot of the tight end and four receivers. That gives Ben a little clear picture of what is going on. We’ve seen tight end slow screens from that set. You get a handful of things. I think it’s something they have been real efficient with”.

As you can gather, Payton is especially aware of the fact that the Steelers like to throw tight end screens out of that look. McDonald has proven to be a weapon in that aspect of the game with his ability to shed tackles and create yards after the catch.

They didn’t really run that tight end screen on Sunday—McDonald himself only had three targets, none on screen passes—but it could be a feature that they look to incorporate into this week’s gameplan in order to get the Saints’ defense to slow down and think twice, both in the running game and the passing game.