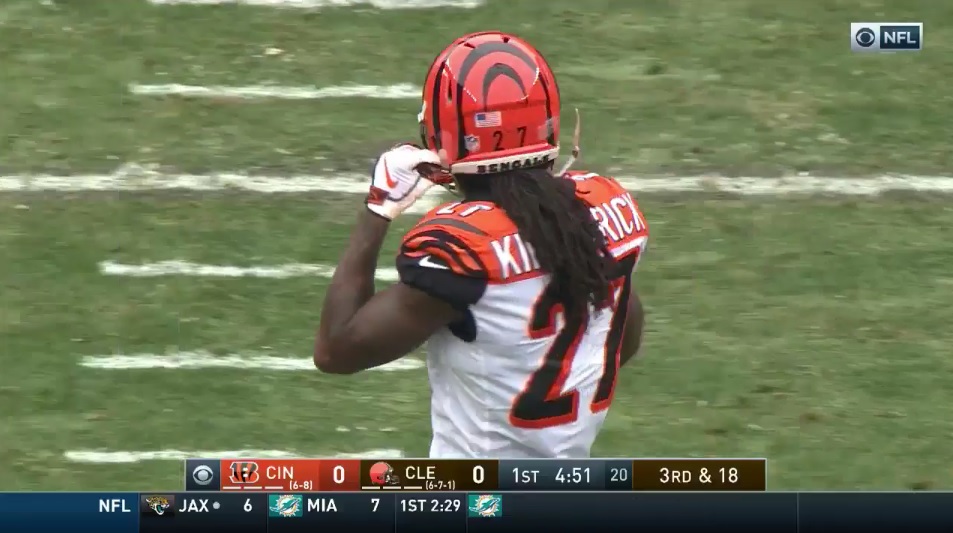 Has a very Oakland Raiders type feel defensively, though we know how that one turned out for the Steelers. So don’t assume anything here. But the defense has struggled at all three levels. The run defense is bottom third in most categories, including YPC (4.8), touchdowns allowed on the ground (17), and runs of 10 and 20+ (58 and 15, respectively).

Up front still has plenty of familiar faces. Geno Atkins is forever the three tech with Carlos Dunlap and Michael Johnson the ends. Andrew Billings has emerged as the starting one tech up front.

Nick Vigil and Hardy Nickerson will be two of the starting linebackers in their base defense. Vontaze Burfict had been the SAM but is now done for the year – maybe his entire career – after suffering his second concussion in the last month. So perhaps Jordan Evans sees more time. Third round pick Malik Jefferson, a guy a lot of us were interested in (myself included) has played just 11 snaps this season. Vigil has become the three down guy, remaining on the field even in dime packages.

The linebacking corps, in a word, is bad. I usually suggest getting the run game going between the tackles but with this group? Get that ball on the perimeter. Those counter tosses they’ve been running could be effective again too. This group is slow, easy to fool, and just not making a ton of plays. You can win inside or outside but definitely willing to push the ball to the perimeter, especially if James Conner suits up.

Here’s Duke Johnson getting outside for a gain of 21.

Quick other stats. They’re last in, uh, a lot of categories. Points per game (29.3), yards per game (418) and third down defense (50%). The latter stat, on third down, is historically bad. Since 1991, no defense has allowed a conversion half the time. Cincinnati is on track to do it. Pittsburgh went 8/14 the first matchup and needs to have similar success again.

Atkins paces the group with ten while rookie Sam Hubbard, who Tomlin mentioned Tuesday, has been on the rise. He has six this year, five coming over the past six weeks.

Secondary remains in tact. William Jackson and Dre Kirkpatrick as the starting corners, Darqueze Dennard in the slot. Jessie Bates is the FS, Shawn Williams the SS. Get this. Williams and Bates both have over 100 total tackles this season, two of only five safeties who have done it, and the others are strong safeties. So the fact both dudes are over 100 speaks to how involved they’ve had to be in and a bad sign for this defense. Even Dennard has 61 tackes, in the top ten for corners, and he’s played just 57% of the time.

In coverage, you get a variety of man and zone. Combination coverages too. Here’s their Cover 6. Cover 2 to the X receiver side with quarters coverage to the trips, so if #1 and #2 run vertical (like they do in this clip), the safety will carry the seam and the corner will take all of #1 vert.

Cincinnati also does a nice job of rotating their coverages and disguising things. Makes it harder to know what you’re getting pre-snap. Bates is young but there’s enough experience in the secondary for them to hide it well. Him aside, everyone else has been in this system for at least three years.

In dime, #40 Brandon Wilson will come into the game as an extra defense. Not a ton of blitzes from them but plenty of games and stunts up front. Watch out for Vigil on a blitz, too, looping around the edge as the end rushes inside.

In the previous article in October, Atkins and Dunlap were the primary focus considering they are 2 of the biggest forces on this defense. But this time around let’s focus on another key component to this defensive front, Andrew Billings.

The second year nose tackle has taken significant strides in 2018. He’s extremely powerful, and plays with great leverage. On the shorter side, but uses a top-heavy approach to gain a push almost instantly. Very violent with his hands, and has the power to change directions at the line and disengage quickly. Perfect example of this last week against Cleveland. 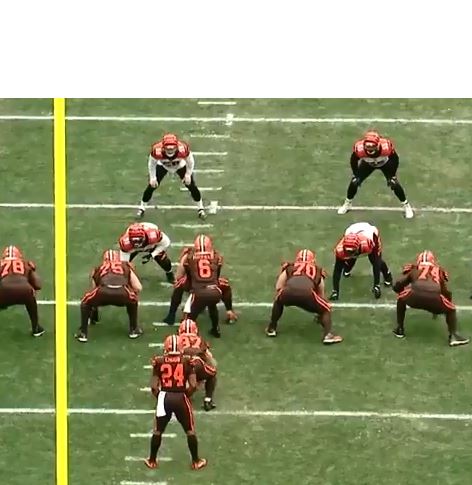 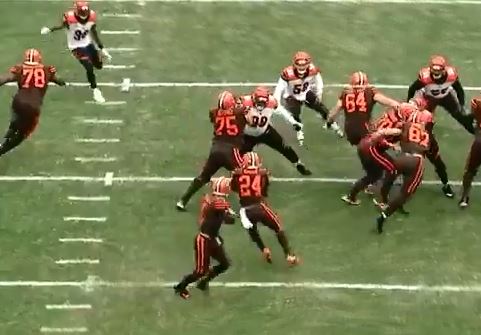 Billings lines up in the 2-technique, but really 2i if you want to get technical as he shades just inside the left guard. It’s a run to the right of formation, which helps given his initial positioning. Billings slides inside the guard giving himself a free arm as well as enough room to plug the gap forcing the running back to cut back left. You can see Billings firmly planting his left foot ready to cut back as well. 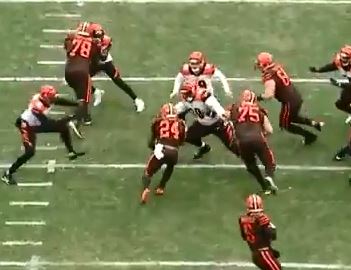 This is where he shows some of the lateral quickness, and ability to disengage using one arm. Billings rips the left guard with his right hand and gets enough of a push to bring his left hand on the outside shoulder of the guard. This gives him free reign to corral the running back for a gain of one. Billings has 7 tackles for loss this season (t-3rd on the team), but it’s the runs for no gain, or a yard or two, that don’t show up on the state sheet, but prove to be impactful. The guy is so young (only in his 2nd season) and well on his way to becoming something special in this league.

Johnson is big and powerful, with great range. Very tough to get hands on him, and he can effectively  disrupt passing lanes. Dunlap brings the power. Plays with leverage very well, and where Billings generates form upper body, Dunlap uses a strong lower-body base. And we all know how dangerous Geno Atkins can be. The guy does everything well for a hybrid defensive lineman.

Hardy Nickerson Jr. is the MIKE, Nick Vigil the SAM, and Jordan Evans the WILL.  Vontaze Burfict is continuing to go through the concussion protocol with most signs pointing to him being inactive week 17. The problem for this group is that Jordan Evans is also dealing with an injury, an ankle, that may keep him out on Sunday as well. Vincent Rey would be the next man in line with very minimal options beyond that.

There are a lot of things up in the air with this group ahead of the matchup, but with Vigil and Nickerson sure to be in the lineup on Sunday, we’ll focus on them in this individual breakdown.

Vigil exhibits good gap discipline, and is rarely caught out of position. Good athleticism to go sideline-to-sideline and also make plays in coverage. Downside for Vigil is size and can sometimes get caught up in traffic or fail to disengage from blocks quick enough. He’s almost always out there on the field given his solid football instincts.

Nickerson Jr. is a good 4-3 linebacker, but will usually see the field only on first down or running situations. Has lower than average speed for the position, and can struggle in lateral movement. Can plug the gaps well, however, and plays with a high motor. Once he gets hands on a ball-carrier, he’s sure to make the tackle.

Quick note about the others who may be active on Sunday. Jordan Evans is extremely athletic. Great speed at the linebacker position, and has the downhill tenacity you want in run-support. Sometimes tough to get off of blocks, however, and also can overrun the play. Burfict, as Steelers fans know all too well, is very aggressive on the field. Will fight, pre and post-play, with his hands and more than willingly engage blockers. Very tough matchup for offensive linemen. He excels in the run-game.

Darqueze Denard enters in nickel packages. Kirkpatrick suffered a shoulder injury in week 16 and, as of the time of this writing, has not practiced. In that case, Denard will slide to the #2 spot, with Jackson being the primary corner. And they’re really hoping this isn’t the case, because their third option would be the currently injured Tony McRae followed by Darius Phillips.

This unit simply gets after it. A high-effort group, they create opportunities for themselves. Not to mention they aren’t afraid to get physical. The Bengals-Steelers matchups over the years have been incredibly physical, and I’m sure exhausting matchups, and it’s not just the rivalry that brings that out. It’s the personnel. And the Bengals definitely have that brand of hard-nosed football exemplified within their secondary. Just check out the nickel corner Darqueze Dennard. You don’t often associate a nickel guy as being a prolific blitzer or tenacious tackle, but Dennard isn’t afraid to stick his nose in there. Here’s an example of how he turns a blitz into a turnover.

Dennard is lined up in the slot on the weakside of the formation. Oakland is going to run inside with the tight end attempting to chip Dennard, followed by the offensive tackle sliding left to pick up Dennard who fires off the edge. It’s a poor block by the tackle, but Dennard doesn’t shy away from contact. He meets the tackle head-on then quickly backs away as he re-positions himself inside to make a play on the running back. From there it’s all effort. Dennard sticking with the play rips the ball free and pounces on it for a big turnover in enemy territory.

This style of play extends to the deep secondary as well. Safeties Jessie Bates and Shawn Williams (the team’s leading tacklers) are great in the run game as well, and are sound tacklers. Just take this play against the Chargers.

Williams is initially about 13 yards off the line of scrimmage, but creeps closer just before the snap, indicating a possible flat-coverage assignment. Williams sits in the middle-zone briefly as the play develops, but keys in on the drag route underneath fairly quickly. He bursts towards the flats just before the ball if out of the quarterback’s hands, and Williams makes a phenomenal tackle for no gain. Great awareness, and excellent fundamentals helped lead to a meaningless play in what could have been a big gain.