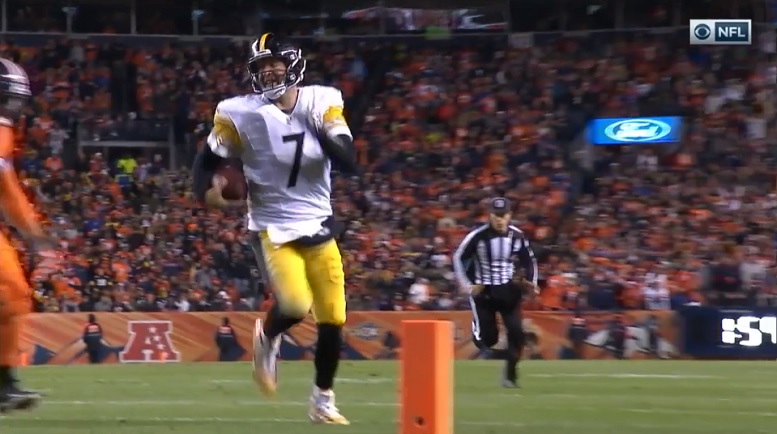 Pittsburgh Steelers quarterback Ben Roethlisberger only needs 6 rushing yards Sunday night against the Los Angeles Chargers to have 100 yards o the ground for the season. That’s somewhat significant because only four other times during his career has he topped the century mark in rushing.

During his Wednesday session with the media, Roethlisberger was asked if there’s anything in particular that has led to him perhaps feeling a little more comfortable running with the football this season.

“You know, I don’t know truthfully,” Roethlisberger said. “Sometimes it’s just, it literally is fear when guys are chasing you, you just find a way to run. But you know, we’re not calling like quarterback sweeps and things like that. It truly is just defenses when they give you that 22-man with two high safeties and everyone else is man, and they’re running with receivers, there’s no one really to account for the quarterback. So, that’s when you have to make the most of your opportunities.”

In addition to a few quarterback sneaks this season, which by the way is something Roethlisberger hasn’t done a lot of the last several seasons, the Steelers quarterback officially has 10 scrambles. 4 of those resulted in gains of 10 yards or longer with his longest scamper coming in Week 10 against the Carolina Panthers. He’d already be over 100 yards rushing on the season if not for 7 kneel downs that resulted in a combine 7 yards lost.

The last time Roethlisberger rushed for more than 100 yards in a season was in 2010 when he registered 176 yards on the ground. His season-high in rushing yards, however, is 204 yards and that happened during the 2007 season.