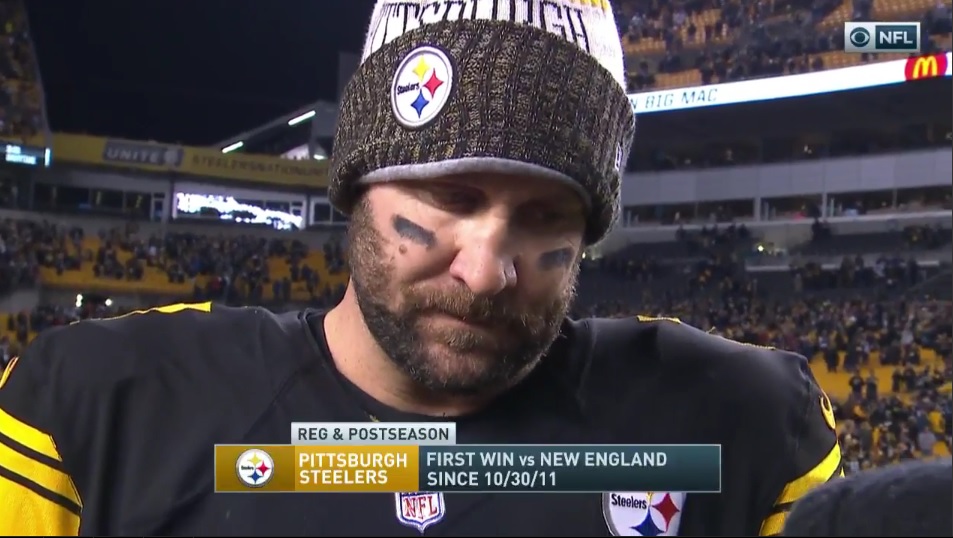 James Conner was ruled out. Ryan Switzer twisted his ankle at Friday’s practice putting his availability into question. Eli Rogers was activated as a precaution. Marcus Gilbert who had not played since Week 6 was placed on injured reserve to make room on the roster.

I’m stuck in a hotel room in Djibouti, resigned to listening to the game from my computer for a second straight game. Honestly, my concern was that the Black & Gold faced a fourth consecutive loss. Friends that were going to sit in my regular section at Heinz Field were excited, hopeful that this was the week the team would turn their fortunes around.

Matthew Marczi described what we should watch for in the game.  The defense mixing players & schemes to cover Rob Gronkowski. Will Pittsburgh have enough left to deal with Josh Gordon & James White? Most important, don’t give away the coverages too frequently. On offense, watch how Pittsburgh uses Jaylen Samuels & Stevan Ridley. Running back screens may feature more than rushing. Bill Belichick is sure to blanket Antonio Brown and JuJu Smith-Schuster. Vance McDonald may be a key alternative target.

Alex Kozora predicted the factors that would lead the Steelers to win or lose the game. In sum, the Steelers would win if Keith Butler disguises the coverages, uses the “dollar” defense with 7 defensive backs, and plays nickel when Patriots in 2-back sets. Defense the key to victory. Alternatively, they lose if the offense can’t score from the red zone, JuJu doesn’t have a big game or if a Jordan Berry punt is blocked.

Dave Bryan laid out the five keys to victory. 1. Force Brady to make poor decisions by pressuring his throws. 2. Run to left early to draw their defense into the box. 3. Control the Gronk. 4. Ben doesn’t force deep passes. 5. Somehow, create a turnover.

The offense possessed the ball six times in the first half. The opening drive was a beauty. It was a mix of Jaylen Samuels running the ball and Ben Roethlisberger completing passes to five different receivers. Eli Rogers picked up a crucial third down to prevent an early punt. Vance McDonald capped it with the touchdown. The Patriots defense stuffed the second drive with two sacks.

Once Pittsburgh got the ball back, they opened with a Ryan Switzer run. Then Ben threw nine straight passes. The last to AB who scored a touchdown to put the Steelers back in the lead 14-7. Ben overthrew JuJu resulting in an interception as the Steelers were driving into Pats territory ending a scoring opportunity.

The final possession had folks questioning Mike Tomlin’s clock management in the final minute. Ben kneeled to end the half instead of having some time to try to get into scoring range.

Just four possessions in the second half but the final one was in the victory formation. The first drive ended at the Patriots 14-yard line with Chris Boswell missing a 32-yard field goal attempt. This was after being first and goal at the 4-yard line but Ben called for intentional grounding which comes with a loss of down. James Washington had a 24-yard catch that moved the ball into the red zone. The third drive ended with Ben’s second interception.

The game started out embarrassing for the defense. First, Brady took a quick snap to catch Pittsburgh with too many players on the field for an 3rd down conversion. Apparently, Mike Tomlin was distracted as they tried to sort out the miscue when Chris Hogan scored on 63-yard pass on the next play. Three defensive backs including Artie Burns and Sean Davis were on a Pats receiver deep leaving Hogan all by his lonesome.

But then the defense settled in. They forced the Patriots to punt on their remaining four possessions of the half. Sony Michel and Rex Burkhead were prevented from gaining to much on the ground. While Joe Haden, Sean Davis, Mike Hilton and Jon Bostic made sure tackles to prevent too many yards after the catches. Held the Pats to seven points out of five possessions!

The defense picked up where they left off at the end of the half. The first drive forced a punt. On the second drive, the defense had created a 3rd and 16 following T.J. Watt’s sack of Brady. Unfortunately, the referees called Joe Haden for defensive pass interference that allowed the drive to continue. Seven straight runs and a pass to Julian Edelman took them to the 10-yard line. But a false start on 4th and 1 led to a New England field goal that tightened the game up to 14-10.

Early in the 4th quarter, New England had the ball again thanks to Ben’s second interception. They drove the ball all the way to the 5-yard line before a holding call pushed them back to the 15. I thought, great … now Brady has more room to throw.

However, a heavy rush by Heyward and Watt had Brady throwing under heavy pressure. Haden made a nice leap and kept his feet in pounds to preserve an interception. New England would get one more shot down 17-10 with 2:30 left to go in the game. Edelman caught a 34-yard pass but was brought down by Morgan Burnett. Pats got as far as the 11-yard line when another penalty pushed them back to the 21 with 37 seconds left. I was pacing my hotel room then standing in the bathroom hardly wanting to hear the play-by-play with my Terrible Towel wrapped around my head. Two passes to Rob Gronkowski incomplete. On 4th down, Brady tried Edelman but the pass was defended by Burnett. Game over.

Who would have thought that the much-maligned defense and its coordinator would manage to hold the Patriots to 10 points? Wow.

The headline remains Chris Boswell. I could hear loud cheering when he converted his two point after touchdown attempts. The missed 32-yard field goal yielded an immediate reaction. Booing was immediate in such a high stakes game. When Boz game on to kick the 48-yard field goal to extend Pittsburgh’s lead to seven, I kept thinking about the missing three. Nightmares of Brady scoring at the end of the game and then attempting a two-point conversion had me worried instead of having some comfort in a 10-point lead. I hope he can right the ship.

Jordan Berry had just two punts. One behind the 20 the other just in front with neither returned. An acceptable day. Ryan Switzer did return one kick for 27-yards but no punt returns. Hoping he breaks a big return when the time is right.

Heinz Field had 94.3% of the seats occupied for the game. Some of the no-shows must have been on the Steelers Depot blog as there were 1182 1st half comments. After the first opening drive, Chris92021 noted that “That was the most prepared we looked in the first drive in two months.” The Intense Camel liked the roster change, “It’s really great having rogers back. That’s how bad they’ve needed a 3rd receiver.” Alevin16 was stunned at the Patriots touchdown, “How does Romo know all these things and Butler does not?” Chris92021 noted even the announcers wondered about the clock, “Wow. Romo just called out Tomlin for bad clock management” SkoolHouseRoxx summed up the half with a question: “To hold the Pat’s to 7 points is a good thing, right?”

Steelers Depot respondents met the standard in the 2nd half with 1729 comments. Steven Ledbetter found a surprise, “Refs actually called penalties on the Pats.” Francesco found a new running back, “MVP…Samuel not even close!” How about the offensive line? The Generic Steelers Fan was reaching for a defibrillator, “My heart is at 98bpm right now, anyone else there with me? Lol” Following Brady’s interception, Jason Vancil liked the irony: “Wow. Brady pulls a Ben” In a game where the Steelers offense only scored 17 points, Alevin16 concluded, “Butler is an absolute genius! Love this ‘Let them drop it’ D”

Many Steelers fans were not optimistic going into this game. Uncharacteristically, the referees called penalties on the Patriots that we are not used to receiving in our favor. Jaylen Samuels took a huge step forward as a running back. If James Conner is still dinged, can Jaylen continue to perform. Kudos to an offensive line that with a couple exceptions kept Ben clean and opened the holes for the runners.

The defense really stepped up as a group. Friends from my section said Heinz Field was louder than they ever heard it. Carol says it was like back when Three Rivers Stadium was rocking. Ken S said it was even louder than the Christmas Day win over the Ravens a couple seasons ago… and that was loud! The team travels to New Orleans, can we march in and continue the parade?

In the 2018 Memorial Day Weekend: Steelers Friday Night Five Questions, I committed to play songs that Steelers Depot respondents suggested might be the new Steelers anthem if Renegade by Styx was ever replaced. Here is entry 36 of 45 from Reg Sayhitodabadguyhunt: Bone Thugs-N-Harmony by Tupac.