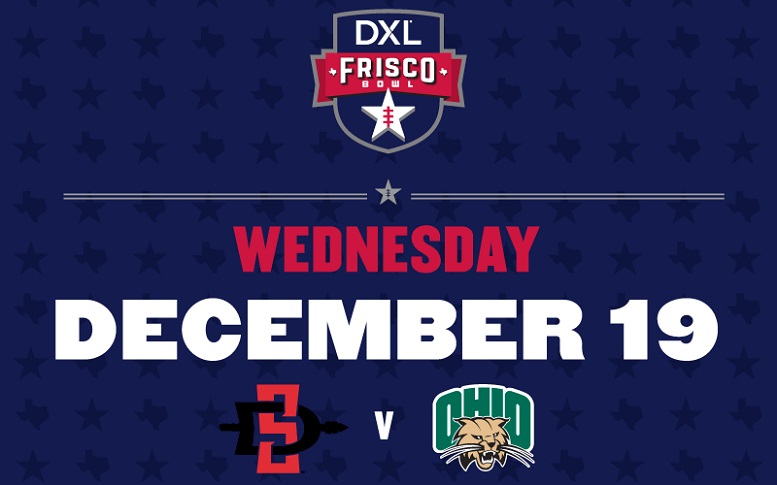 An underrated matchup awaits the world of college football today as the San Diego State Aztecs take on the Ohio Bobcats in the Frisco Bowl. The storyline of the day is whether the Aztec’s defense can limit the high-powered Ohio offense that averaged 41.2 points per game.

Here are all the prospects to keep an eye on during today’s Frisco Bowl.

Kickers are people too and then sometimes, kickers are even pretty good prospects. That is the case for Aztecs’ kicker John Baron, who is arguably San Diego State’s biggest prospect for the 2019 NFL Draft. Baron is a left footed kicker who comes equipped with a good mix of accuracy and power. The senior kicker is 135/137 on extra points and 50/60 on field goal attempts with a career long of 54 yards.

Junior running back Juwan Washington continues the trend of small, quick footed running backs to come out of San Diego State after Donnel Pumphrey and Rashaad Penny. Washington stands at just 5’7 but he is shifty and not afraid to take a hit. The junior set new career highs in rushing yards (870) and touchdowns this season (10). He also brings experience in the return game with three kick return touchdowns over his NCAA career.

Senior offensive tackle Ryan Pope will likely be a late round – undrafted prospect but he presents good size at 6’7 and 315 lbs.

Linebacker Kyahva Tezino is the signal caller for the Aztecs defense. A junior, Tezino has recorded 119 tackles and his 8.5 sacks were second in the Mountain West Conference.

Bobcats’ quarterback Nathan Rourke has not yet declared his intentions for the 2019 NFL Draft but man, is he one fun player to watch. Rourke, Canadian born, improved on his 2017 numbers this season. The quarterback improved his completion percentage from 55% to 61% and increased his passing touchdowns from 17 to 22. A dual threat athlete, Rourke has also tallied 1723 rushing yards in two years while recording a staggering 34 rushing touchdowns.

The Bobcats’ high scoring offense is built on the backbones of a great rushing attack, starting with running back A.J. Ouellette. The senior back is coming off back to back seasons with at least 1000 yards rushing and added a career high 12 rushing touchdowns this year. Ouellete lacks true raw athleticism as he does come with limited lateral agility but he does show comfortability in cut back runs.