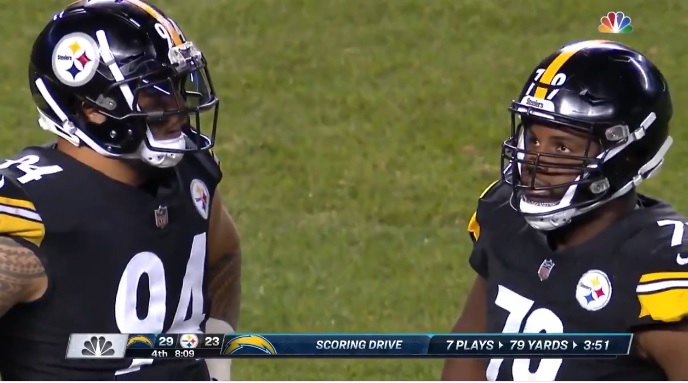 With members of the 2008 defense in attendance, the Pittsburgh Steelers did their best to make those in attendance reminiscence about that legendary defense as the team blew a 15-point lead, losing to the Los Angeles Chargers 33-30 in stunning fashion.

It was a tale of two halves that saw the Steelers jump out early but unable to close the deal as a Mike Badgley field goal won it at the end and dropped the Steelers to 7-4-1. The field goal was without its own troubles, as the first one missed wide left but Joe Haden was ruled offside. The second attempt was blocked but also ruled offside. The third time was the charm as Badgley finally punched it in to win.

It is the first time the Steelers have held a 14 or more point lead at home and lost.

It took the Steelers’ offense just three plays to find the endzone. A 46-yard catch by Brown down the sideline gave the Steelers the ball at the one-yard line where James Conner did the rest, punching it in to go ahead 7-0. Aided by a pass interference call in the end zone, the Steelers would call on Conner again to pound the rock from the one-yard line, adding his second touchdown of the night and giving the black and gold an early 13-0 lead.

That is where things took a weird turn. The Chargers would get right back into the game with a bit of help. That help came not from a defensive mis lapse or a big play but from the officiating crew. A clear false start on Chargers’ right tackle Sam Tevi was not called and Phillip Rivers took full advantage, connecting with Travis Benjamin on a 46-yard touchdown pass.

Ben Roethlisberger flirted with more scoring opportunities but a couple of crucial mistakes stalled the Steelers’ offense. First, an interception deep in Chargers’ territory to rookie safety Derwin James left at least three points on the board. Ben followed suit on his next drive, missing a wide-open Justin Hunter by inches in the end zone leading to a Chris Boswell field goal. Though Ben would make up for it with a 28-yard touchdown pass to Brown before halftime, giving the Steelers a 23-7 lead, these mistakes would play an important part in the Steelers’ collapse.

Coming out of the half, Roethlisberger would be unable to muster much with his offense. A suspect holding call on Ramon Foster killed the team’s best chance to pile on any points, another mistake, perhaps one mistake too many with Rivers waiting to pounce.

Rivers would lead a 13-play, 88-yard drive, converting three third down attempts in the process, ending it off with a 10-yard touchdown pass to Keenan Allen. Allen was instrumental in the comeback finishing with 14 receptions for 148 yards. Rivers would also finish with 299 yards passing and two touchdowns. Most importantly though the Steelers were unable to force any turnovers once again.

The nightmare second half would continue as on the Steelers’ ensuing punt, Chargers’ punt returner Desmond King would take it 73 yards to the house. The successful two-point play would tie the game at 23 each.

The Chargers’ ground game would break the tie as Justin Jackson and Austin Ekeler sliced up the defense as the duo combined for 60 yards with Jackson scampering to the end zone for 18 yards to give the Chargers a 30-23 lead. This would cap off 23 unanswered points for Rivers and the Chargers.

Roethlisberger would answer back, scoring the team’s first points of the second half, leading a late fourth quarter drive, connecting with Jaylen Samuels to tie the game at 30-30 with just over four minutes remaining.

The comeback was not enough as the Steelers allowed over 80 yards rushing in the second half while their offense was unable to keep pace with the Chargers’ offense, being outscored 26-7.

Next on the schedule for the Steelers is a west coast road trip to Oakland to take on the Raiders. The west coast has been much more of a disaster than a vacation for the Steelers over the years, but Mike Tomlin will need to find a way to overcome his previous shortcomings in order to keep pace in the AFC. Kick off is set for 4:25 p.m. EST.