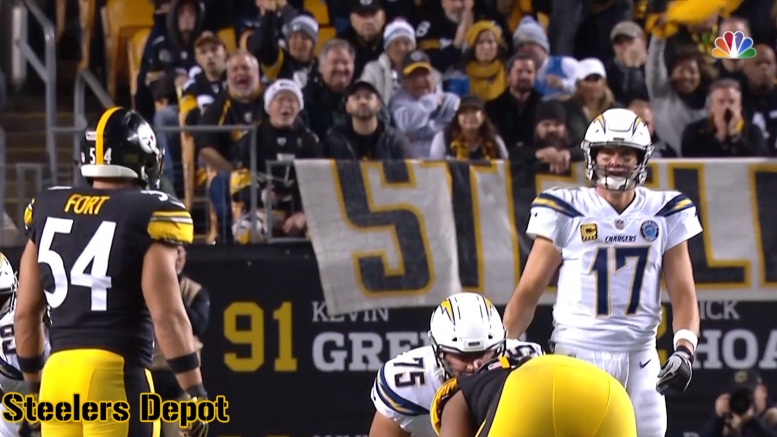 Pittsburgh Steelers inside linebacker L.J. Fort played 52 defensive snaps on Sunday. That is the most that he has ever seen in a game with the Steelers, his previous high being 27. You would have to go all the way back to his rookie season in 2012 when he was with the Cleveland Browns to find the last time he had more than 20 snaps, and that included just two games of 37 and 38 snaps.

So why did he suddenly play so much against the Los Angeles Chargers, while Jon Bostic, the team’s primary starter up to this point of the season, only scarcely played? Was it simply a matchup discussion or is this something that is going to continue, rendering him effectively a starter?

That would certainly be a big turn considering that he hardly played on defense for his first several years with the team, only finding a minor role for himself late last season in coverage situations following Ryan Shazier’s injury.

That seemed to be the fate in store for him once again, as he did not play in the first three games of the season, but he saw 11 in the game against the Ravens in which Vince Williams was injured, and then had a regular rotational role with Tyler Matakevich starting in the next game.

While he didn’t have a defensive role the game after, the Steelers made a post-bye adjustment to install him into their dime defense as both Williams and Bostic came off the field. Now, perhaps, they are stretching his role even further, making him a nickel or coverage linebacker.

For as…let’s say content that I have been with Bostic’s overall play this season, particularly against the run, I certainly would not have a problem with the Steelers making the decision to give Fort more opportunities to contribute on defense.

He recorded a career-high 12 tackles in Sunday’s game against the Chargers, nine of them as the primary tackler. Five of those tackles went for run stops, though he also had three tackles in coverage 10 or more yards down the field, yet even one of those plays was a stop, as it came on third and 11.

I think that most of the regular readers here are aware by now that we at the site have been fans of Fort for a while now and pretty much all of us made the argument last season that he should have been given the chance to start when Shazier went down.

If Sunday’s effort was the type of performance that we can expect to see out of him going forward in what is essentially a starting role, then I wouldn’t take issue with him passing over Bostic on the depth chart. He is far from a liability against the run, but he offers more in coverage than any other inside linebacker on the team right now.