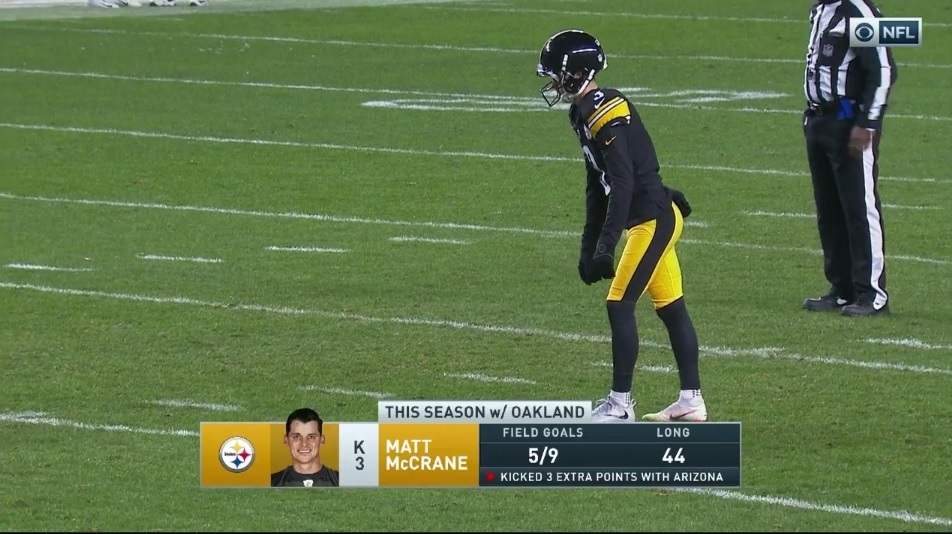 It didn’t take long for Matt McCrane to make his presence known in a Pittsburgh Steelers’ uniform. He went 3-3 in Sunday’s win over the Cincinnati Bengals. Add in an extra point and it was a perfect day, even if every kick didn’t go straight down the middle.

“It was a good team effort,” David DeCastro said of the win. “Some nice kicks by the new guy. So that was nice.”

That’s about all there was to say with a win that still ends in a defeat, the Steelers season ending, barring the near-impossible happening in the Colts game going on right now.

Mike Tomlin was quick to praise McCrane in his post-game press conference.

“Can’t say enough about the guys, particularly like Matt, coming in, getting on a moving train, and kicking the way he did today.”

According to the Post Gazette’s Ray Fittipaldo, Tomlin presented McCrane with the game ball afterwards.

“I got one when I was in Oakland, too,” McCrane said after the game, per Fittipaldo. “It’s the second one of my rookie season. I just have to use this and take it as momentum going into next season and get better in the offseason.”

McCrane reportedly noted his contract extends into 2019. It’s possible the Steelers carry him through the offseason as the team’s second kicker but it’s unlikely he enters next season as the starter. Pittsburgh will have an interesting decision to make with Chris Boswell. He’s due a $2 million roster bonus in early March. Given his struggles this year, it’s hard to imagine the team will pick that up. But we’ll have to wait for that decision. If they don’t, even with McCrane in the mix, it’ll feel like they’re back at square one in trying to find a kicker.