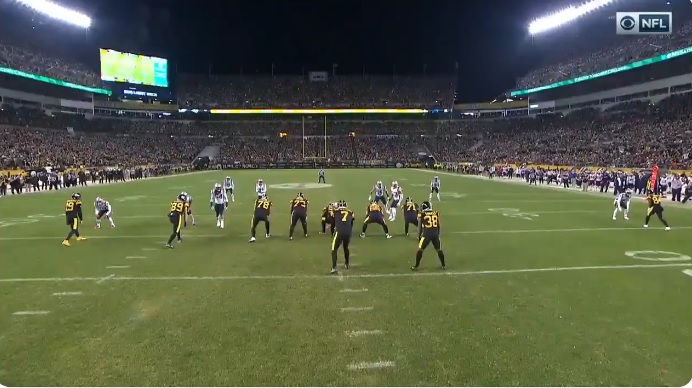 The Pittsburgh Steelers went with a different approach for the biggest game of the season.

It ended in a different result. For the first time since 2011, a win over the New England Patriots, defeating them 17-10 Sunday evening at Heinz Field.

That even meant the coin toss. The Steelers chose to receiver the ball, rare for them to do, but it paid off. On their opening drive, Ben Roethlisberger marched the offense on a 11 play, 75 yard drive. Five different receivers caught a pass, capped off by Vance McDonald’s pivot route on 3rd and goal to find the end zone.

It was a lead that proved to be short-lived.

New England followed up by going 77 yards in just three plays. A busted coverage got Chris Hogan wide open for a 63 yard walk-in touchdown to tie the game. After the series, Artie Burns, one of the new faces in the lineup, was benched by Mike Tomlin.

Pittsburgh regained the lead early in the second quarter. Another efficient drive ended when Roethlisberger found Antonio Brown on a switch release down the left seam for a 17 yard score, going up 14-7. The defense got a fortunate couple of stops thanks to penalties and drops gave the chance for the Steelers to extend the lead. They couldn’t capitalize, an unfortunate recurring theme during this losing streak.

Roethlisberger threw the first of two interceptions of the day, throwing high over a well-covered JuJu Smith-Schuster and picked by Duron Harmon. Both teams punted to the end of the half.

Early in the third quarter, the Steelers had another chance to extend the lead. After forcing another punt, thanks to a Josh Gordon drop, Roethlisberger and company marched to the Patriots four. Jaylen Samuels was stuffed on 1st and goal, Roethlisberger called for intentional grounding on second down, and an incompletion to McDonald on third down.

Boswell trotted out for a 32 yard field goal.

But the Steelers defense, much maligned during the last three losses, made enough plays. New England went ten plays but turned away at the Steelers ten, settling for a Stephen Gostowski 33 yard field goal. The Steelers’ lead was cut down but a lead nonetheless.

Pittsburgh drove the ball again but only to end with another interception. Eli Rogers bunched up with Brown and Harmon came away with the ball once more. But the defense stepped up with a turnover, an early Christmas Miracle. Joe Haden picked off the first pass by a Steelers’ DB since Week Eight, taking advantage of a failed Brady throwaway as the Patriots drove into the Steelers red zone.

The offense took it from there. Twice, the Steelers moved the sticks on third down. McDonald caught an out route to the sideline. Later, Roethlisberger found Samuels wide open on a scramble drill for a 3rd and 9 conversion with just three minutes remaining. Samuels finished the day with 141 yards on the ground, a great performance, and starkly different than what happened last week in Oakland.

The drive did stall out, an end zone incompletion to JuJu Smith-Schuster, and Boswell was called again from 48 yards out.

New England had a final chance to tie the game. Brady quickly moved the ball, hitting Julian Edelman for 30 yards well into Steelers’ territory. But the defense held firm for one final time. On 4th and 15, Brady threw to Edelman over the middle. It was high, knocked away by Morgan Burnett, and the Steelers, finally, won.

With the win, they move to 8-5-1 on the year, still sitting in first place in the AFC North. They’ll travel to New Orleans next Sunday at 4:25.