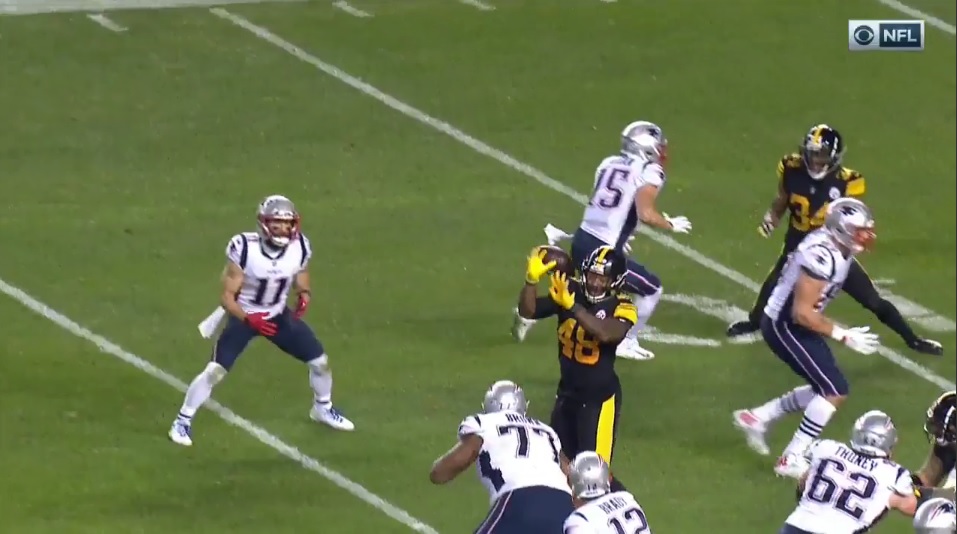 Man, what an exhilarating win that was.

Sunday’s 17-10 win by the Pittsburgh Steelers over the New England Patriots was much needed for the sliding black and gold.

The Steelers dominated in the run game and saw its much-maligned defense step up time and time again against the greatest quarterback in the history of the NFL, leading to the seven point win at Heinz Field in front of a raucous fan base.

Sunday’s game really came down to a handful of plays that the Steelers made and the Patriots didn’t. Let’s take a look.

In his second career start in the National Football League, rookie running back Jaylen Samuels showed early that is was going to be a lucrative day for the Steelers on the ground. On a 2nd and 4 near midfield, Samuels ripped off this 25-yard run off right guard without being touched until the end of the run when Devin McCourty pushed him out of bounds.

Pittsburgh’s offensive line opened up gaping hole after gaping hole on the ground, and Samuels took advantage on his way to a career-high 142 yards on 19 carries, which was the first time in his career as a football player — college and high school included — that he cracked 100 yards as a rusher.

Technically not a play due to the pass interference penalty, but this flag drawn by Eli Rogers was one of the biggest calls of the game, and it came early in the second quarter. Facing another 2nd and 4 in New England territory, Ben Roethlisberger took a deep shot down the right sideline to Rogers, who was making his 2018 debut.

Rogers never really had a step on Jonathan Jones down the sideline, but that was due to pass interference by the third-year New England cornerback. The 26-yard penalty set the Steelers up at the New England 17 yard line, which led directly to a 17-yard touchdown pass from Roethlisberger to Antonio Brown, pushing the Steelers in front 14-7.

With Pittsburgh holding a 14-7 lead late in the third quarter, the Patriots went on a lengthy 13-play drive that saw them reach the Steelers’ 10-yard line.

Pittsburgh held strong on this 3rd and 4 at the 13, as rookie safety Terrell Edmunds came up and made a big stop on Julian Edelman right before the first down marker, forcing the Patriots to settle for 3 points.

If Edelman gets the first down, there’s a strong chance the Patriots put another touchdown on the board, likely tying the game at 14-14. Instead, Pittsburgh held a 14-10 lead with possession.

I chose Chris Boswell’s miss over his make near the end of the game largely due to the fact that Boswell’s mid-third quarter miss loomed large as the Steelers offense sputtered and the defense needed to be relied on once again to hang around.

Boswell pushed this one so far wide right that it didn’t even hit the kicking net behind the goal posts, meaning he missed in disastrous fashion.

At 32 yards, this should have been a chip shot for the Boz. Instead, he looked like he hadn’t kicked in years, pushing it well wide right as soon as it left his foot.

Fortunately, the fourth-year kicker redeemed himself late with a 48-yarder that split the uprights, giving the Steelers a 17-10 lead that held up in the end.

The Steelers struggle to force any kind of turnover, and the Patriots are nearly automatic in the red zone.

That changed on Sunday in a big way.

Joe Haden out-leaped Rob Gronkowski and Edelman at the 4-yard line for this interception, keeping the Patriots off the board in a 14-10 game.

Tom Brady rarely ever makes mistakes like this, but the pressure of Stephon Tuitt and Cam Heyward off the edge caused Brady to panic in the pocket, resulting in him trying to throw the ball away near the front right pylon where Gronkowski and Edelman were situated, meaning it wouldn’t be an intentional grounding and a loss of down like Roethlisberger took earlier in the game.

But Brady doesn’t have the arm he once did, which caused this ball to float on him, allowing Haden to make the biggest game-changing play of the game.