The New England Patriots made the Pittsburgh Steelers’ defense pay for the one major communication bust they had Sunday. On the Patriots third play of the game, Tom Brady hit a wiiiiiide open Chris Hogan for the easiest 63 yard touchdown in NFL history. Literally, it was the most open any receiver has been this season.

Chris Hogan had 19.2 yards of separation from any defender when he caught that touchdown pass, making him the most wide-open receiver on a reception this season per the NFL's Next-Gen Stats. The Steelers just totally blew that coverage against a simple… https://t.co/QP4Wzwf0rW

At first, it seemed like the blame should fall on Artie Burns. Mike Tomlin pulling him after that series, never to return defensively again, seemed to corroborate that. But after the game, as Dave Bryan wrote about, Tomlin absolved Burns.

“No, and that play wasn’t even his fault,” Tomlin said of Burns. “So, I think I want to be clear in saying that. That play that we gave up was not his fault.”

So is Tomlin telling the truth? Or just covering for his player? Honestly, I think it’s the former. It’s not on Burns, as much of a whipping boy he’s been all year.

The issue was Sean Davis. 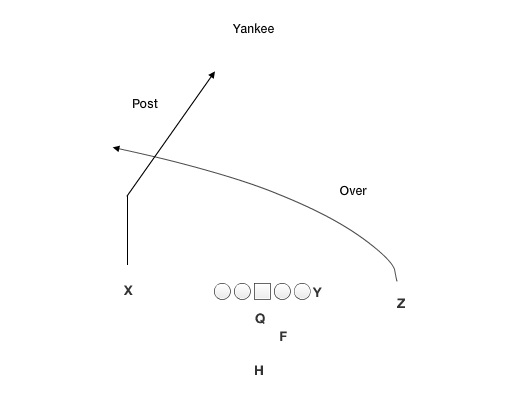 The Steelers respond by playing a three deep shell, Cover 3. In the past, these over routes would kill Pittsburgh time and time again. They would spot drop, each defender play their zone, and the over would flood the coverage. Too many receivers and not enough men to cover. Like this Jim Dray 20 yard reception back in 2014. It is a three man route combo, today’s was a two man, but still, the Steelers should have the numbers to match up. Yet Dray, the tight end, is wide open across the middle of the field.

Starting last year, as far as I can tell, the Steelers smartly changed their approach. Instead of playing that spot drop, they switched the coverage. The corner with the over route would pass it off to the free safety and they’d trade assignments. The corner becomes the deep help, bracketing the post, and the safety becomes the corner, taking the over. 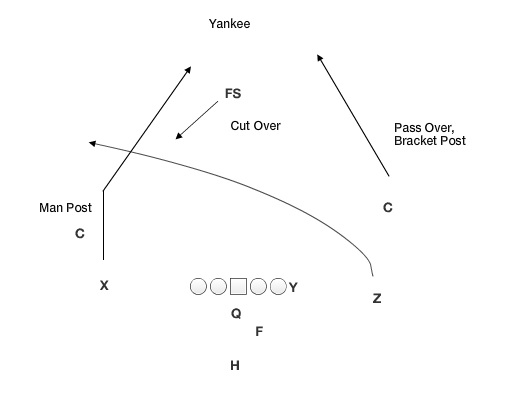 We have several examples of that since it is such a popular concept for teams looking to throw deep with max protection.

Here they are doing it against the Cincinnati Bengals last December. Not executed well, mind you, but you see the concept. Safety cuts the over route, the corner passes it off and brackets the post. 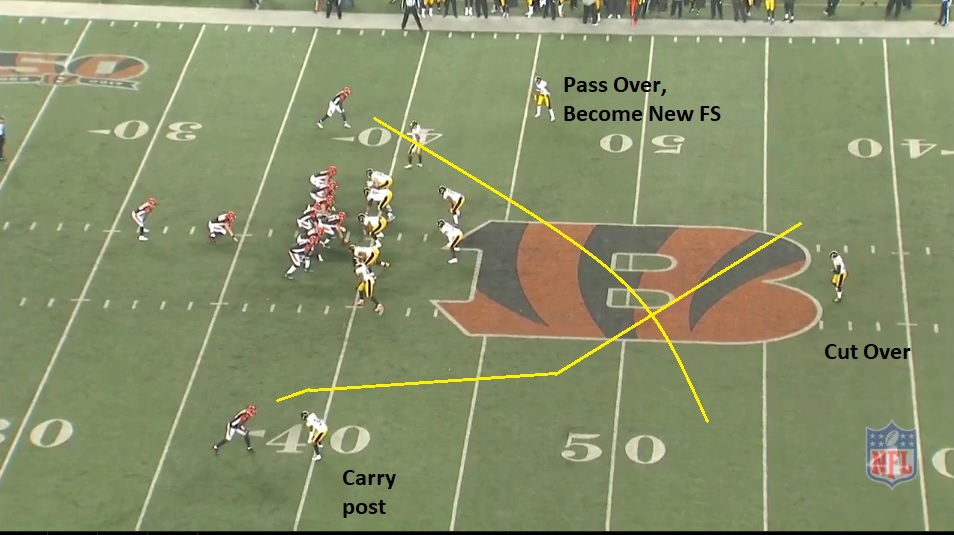 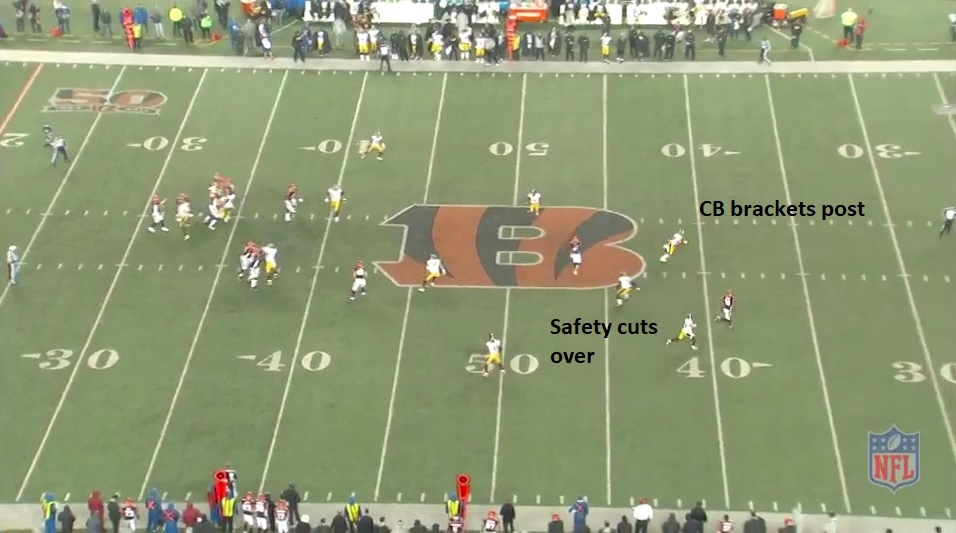 And again versus Jacksonville in the playoff loss.

Once more in Week One against the Cleveland Browns this year.

Every single time, the safety has taken the over route. So that brings us to Sunday. Same concept from the Patriots. 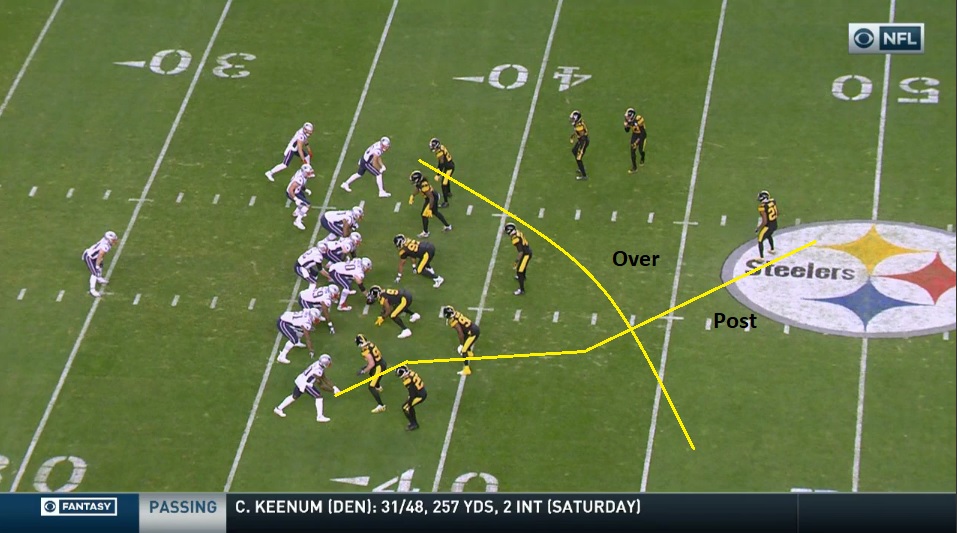 This time, Sean Davis doesn’t take the over route. The way they’ve played it every time since last year, Joe Haden correctly passes the route off. But because Davis doesn’t execute his presumed assignment, the coverage is busted, and Hogan is left wide open. 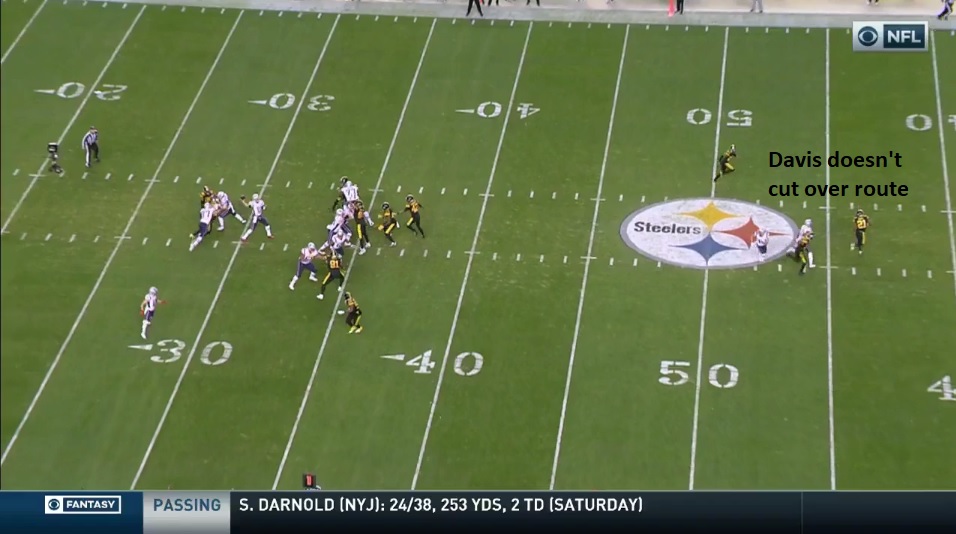 Tomlin did put the blame on himself after the game. On the previous play, the Steelers made a late substitution and gave up a first down on third and short. Tomlin said he was arguing with someone, I don’t know if that was an official or a coach, and said the assignment didn’t get communicated properly. So it is possible the coaching staff screwed it up from the beginning. But I can only evaluate what I see and know to be true and a guy like Davis knows how the Steelers play this coverage anyway.

Is it weird that Tomlin still benched Artie Burns for the rest of this game? Yes. But based on what I’ve seen before, and what Tomlin said post-game, I can’t reasonably put the blame on him. He’s played it the same way as the other corners in the clips above.

I do prefer to write something positive following a win so I don’t mean this to be a “downer.” End of the day, the defense allowed just three points the rest of the game, a remarkable feat given their own performance and the opponent they were facing. But because it was such a critical breakdown, I wanted to explain why I thought it was on Davis and not on Burns, as Tomlin made clear.