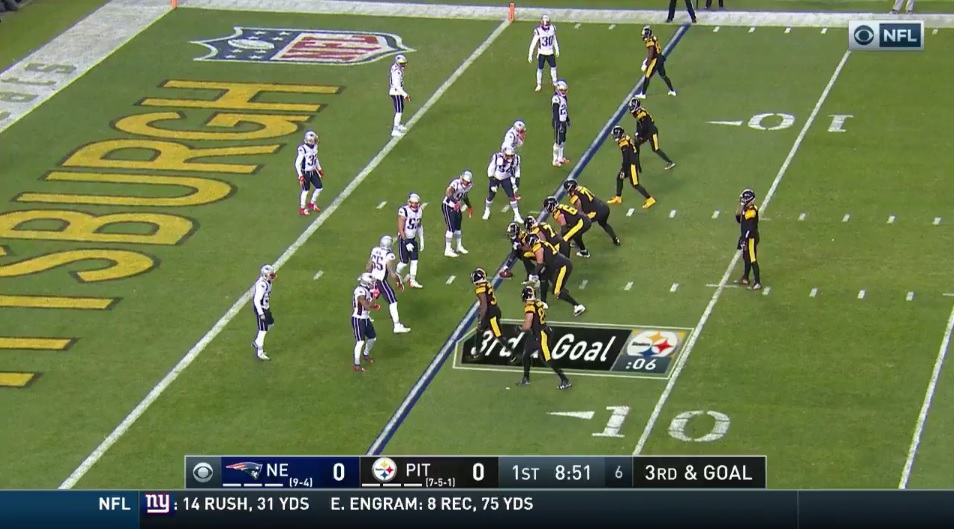 You couldn’t have scripted a better opening drive for the Pittsburgh Steelers. 11 plays, 75 yards, capped off by Vance McDonald’s five yard touchdown on third and goal. The Patriots’ defense put up little resistance and immediately, Pittsburgh put the pressure on them.

Thank Randy Fichtner for a great scheme and opening script. He gave Bill Belichick a taste of his own medicine. Spread the field out, force the Pats to declare their coverages and blitzes, and let Ben Roethlisberger make the right decision.

After the Steelers entered Patriot territory, four times Fichtner aligned Antonio Brown and JuJu Smith-Schuster to the same side of the formation out of empty.

Fichtner knew how the defense would play those two guys. Roll the coverage to them, bracket Brown and/or Smith-Schuster. Which meant opening things up for everyone else, guaranteed to see man coverage.

He used it on the first snap after Jaylen Samuels’ 25 yard run crossed into enemy territory. Empty set, Brown and Smith-Schuster up at the top with Ryan Switzer and Eli Rogers at the bottom. The free safety is sitting middle of the field and shaded to the trips side. Since Stephon Gilmore wasn’t traveling with  Brown, instead at the bottom versus Switzer, you can expect zone coverage and Cover 3 (because of the single high safety). The strong safety rotating down to cover #3 tells you this. That’s the benefit of empty. It declares the coverage. 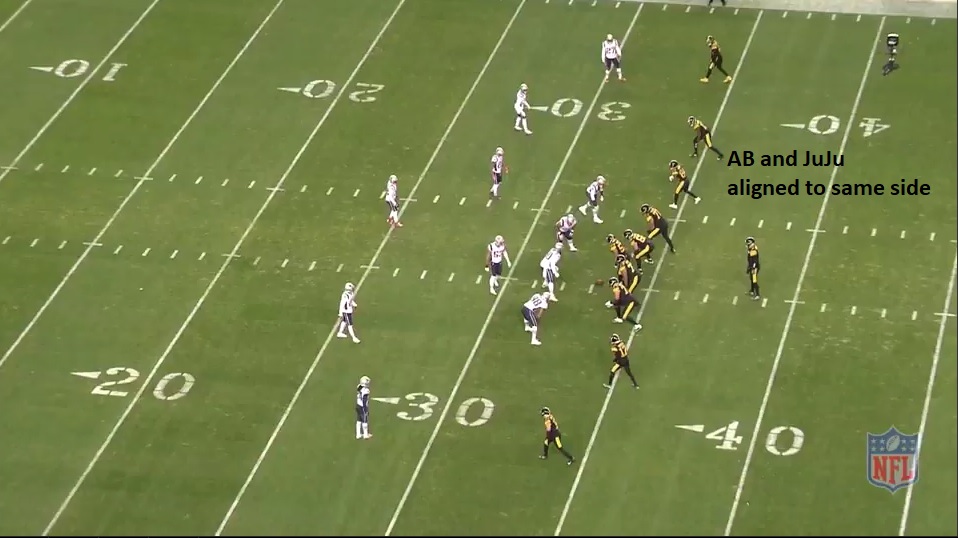 So Roethlisberger works the twin side, a curl/flat combination hits an open Rogers in the flat for an easy gain of four yards.

Far from an impactful play but an idea of how the Patriots defense is responding. That’s one reason why you run plays. To move the ball and score, obviously, but feel out how the defense has gameplanned for you.

Very next snap. Roethlisberger has the luxury to take a deep shot because of an offsides call but the coverage dictates it too. Again, Brown and JuJu to the same side. The Patriots bring a blitz with #21 Duron Harmon and FS Devin McCourty rolls over to the blitz side. 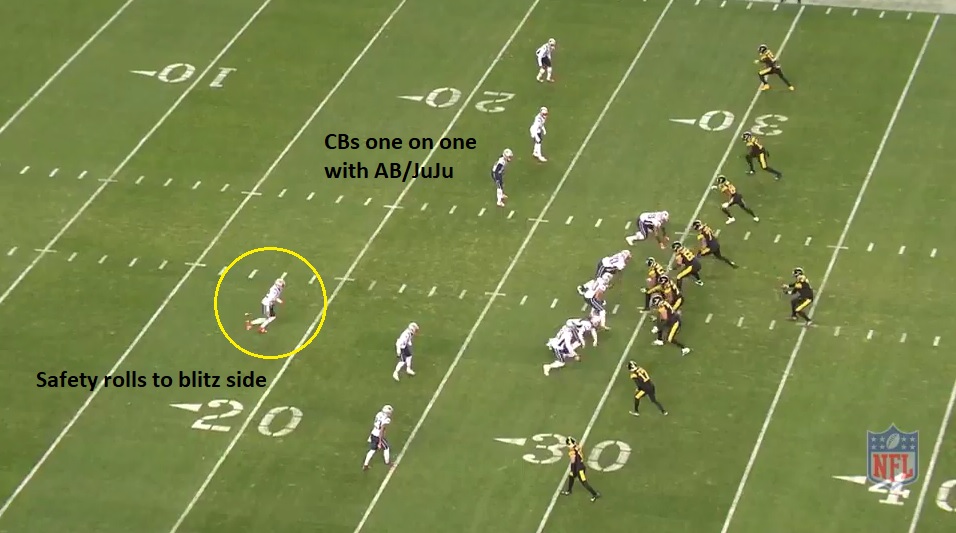 That declares the coverage. There’s no deep help, all the CBs one-on-one to the trips side. So Roethlisberger smartly takes his shot, though the throw is incomplete.

Couple plays later. Trips to the bottom, Brown and JuJu, twins to the top, Samuels and Switzer. You know you have man coverage at the top (Gilmore on Brown) and yup, a Fichtner favorite, slant/flat combination. Samuels crosses McCourty’s face and makes a nice grab for ten yards.

Finally, the McDonald touchdown. This one really highlights how effective the formation was. 3rd and goal, you know the Patriots are hellbent on not letting Brown or JuJu beat them. Fichtner again lines them up to the trips side. 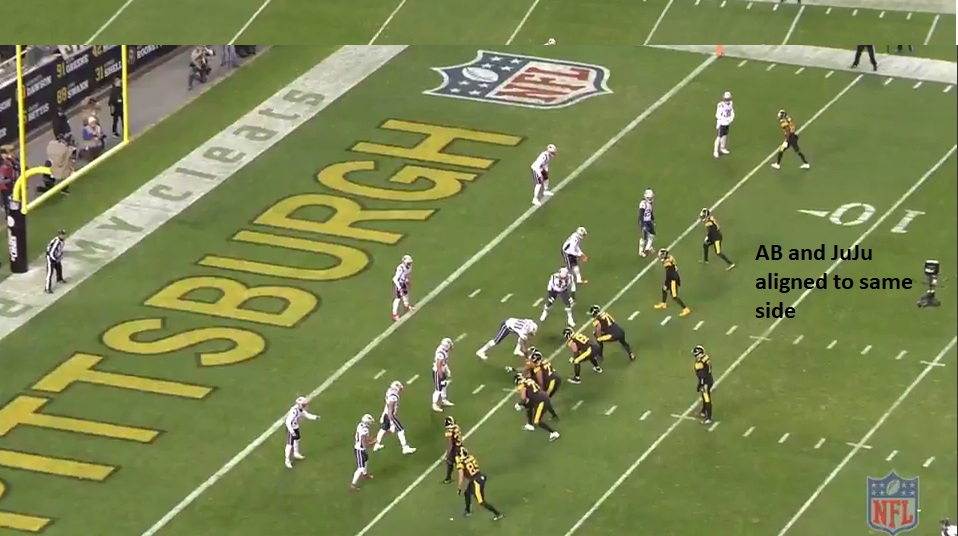 Both guys are bracketed. So once more, the twin side has one-on-one, man coverage. Vance McDonald gets matched up on strong safety Patrick Chung, a favorable matchup, and beats him on a return route, stemming outside and then breaking back in. 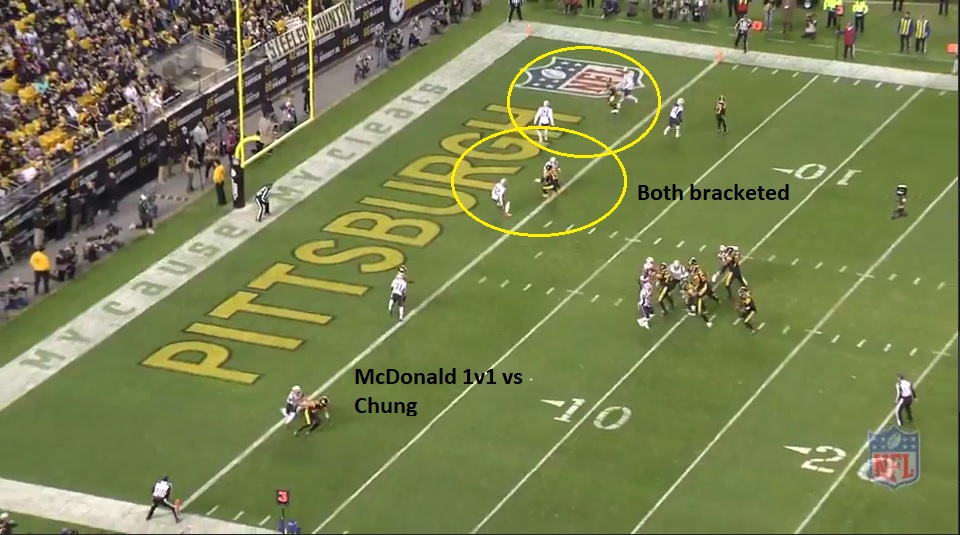 You took what you knew the Patriots were going to do, rotate their coverage to the Steelers’ best guys, and used it against them. Fichtner let his secondary options make plays – Samuels, Rogers, McDonald. There was trust in them to beat man coverage and trust in Roethlisberger to make the right reads. And they did.