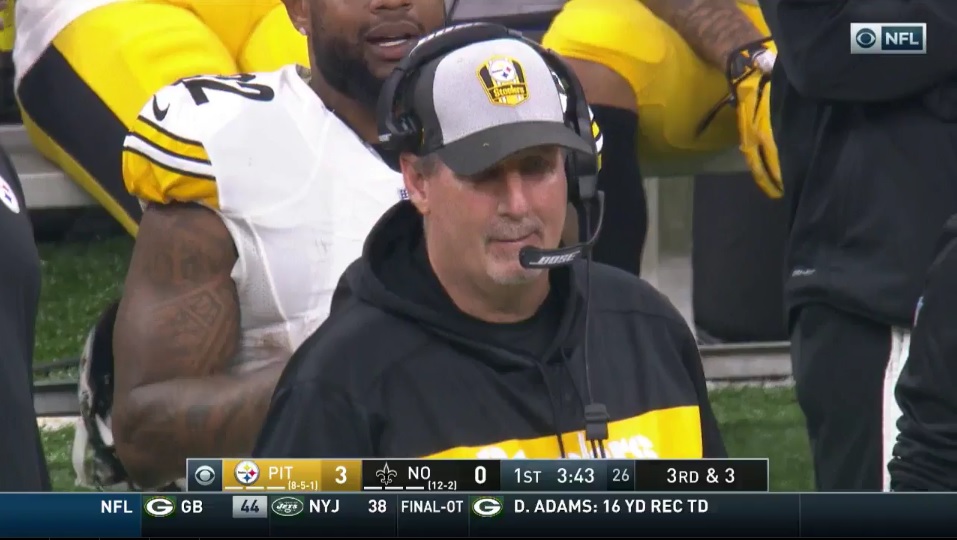 There’s no question it’s been a frustrating season watching Keith Butler run the Pittsburgh Steelers’ defense. There’s been decent moment, like his gameplan against the New England Patriots, and an overall competency during their six game win streak.

But yesterday was more of the same. A general frustration for how personnel was managed and the gameplan Butler set out with. I can sum the game up in one play, another frustrating personnel decision that gave the Saints a touchdown that was too easy.

It’s 2nd and goal from the Steelers one, New Orleans up 17-14 midway through the third quarter. The offense comes out in a heavy 23 personnel. Pittsburgh appropriately responds with a goal line package, a 4-3-4 grouping with three safeties in the game. 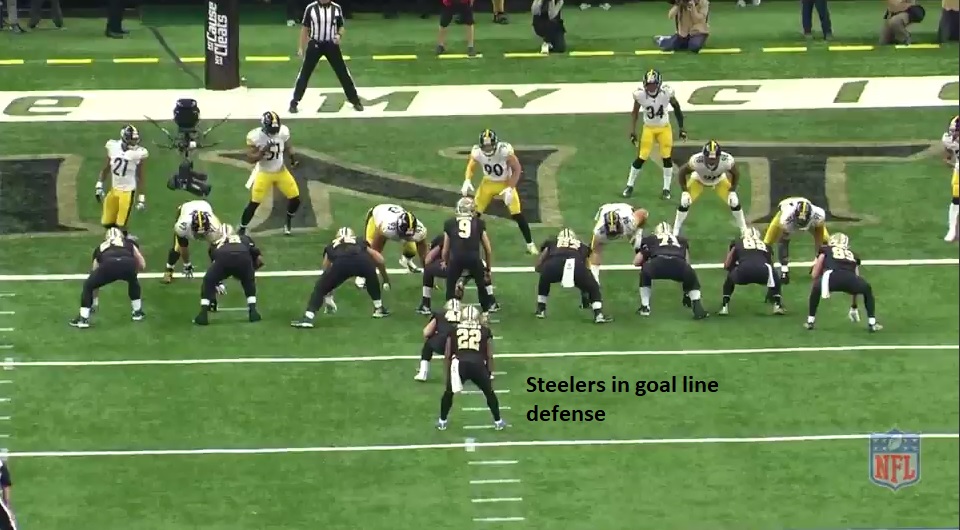 In part thanks to a Mark Ingram trip, the Steelers stop him for no gain. Huge third down upcoming. Holding the Saints to a field goal to begin the second half is a win for the defense.

New Orleans lightens their personnel but only slightly. They come out in 12 personnel, including a 6th offensive linemen entering the game, #64 Will Clapp with two receivers on the field. Butler decides to make a personnel change of his own, which I have no issue with. Need to have two corners in the game to match up against their two receivers. Cool with me.

But Butler does something crazy. Stupid, really. He rolls out his dime package, his 2-3-6 front. Against 12 personnel. On the goal line. On 3rd and 1. 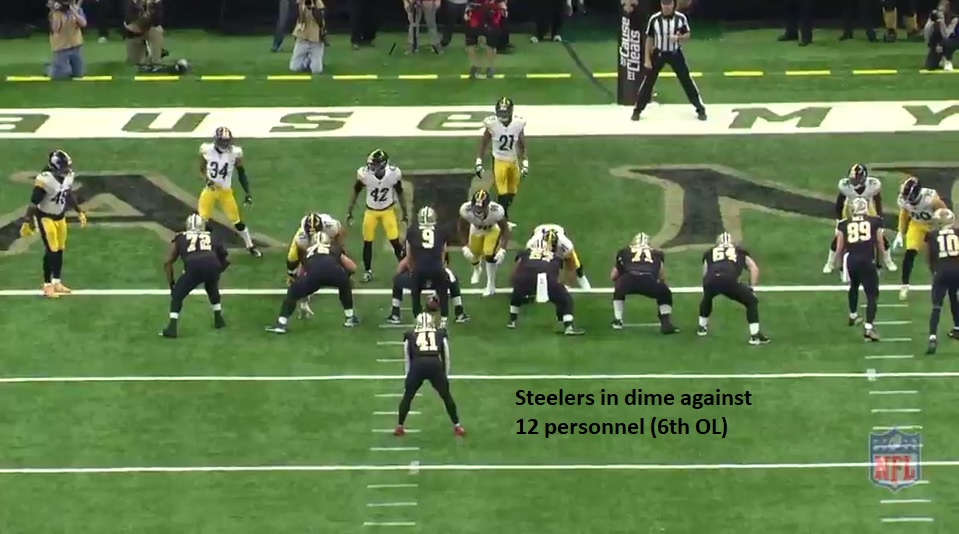 I hope I’m not the only one who sees something wrong with that photo. There’s no one in the C or D gaps to the strong side of the formation. The A gap defenders are Vince Williams and…Morgan Burnett, who I guess is supposed to handle taking on 320 pound linemen at the goal line without giving an inch. T.J. Watt and Mike Hilton are aligned wide on the tight end.

Guess where the Saints ran the ball? They run off right tackle, getting down blocks on Stephon Tuitt in the B gap (who isn’t even shaded in the gap, he’s head up). He’s easily washed, predictably, and given no chance to make a play. Ditto with Williams while Burnett can only duck his head, even though the run doesn’t come near him. 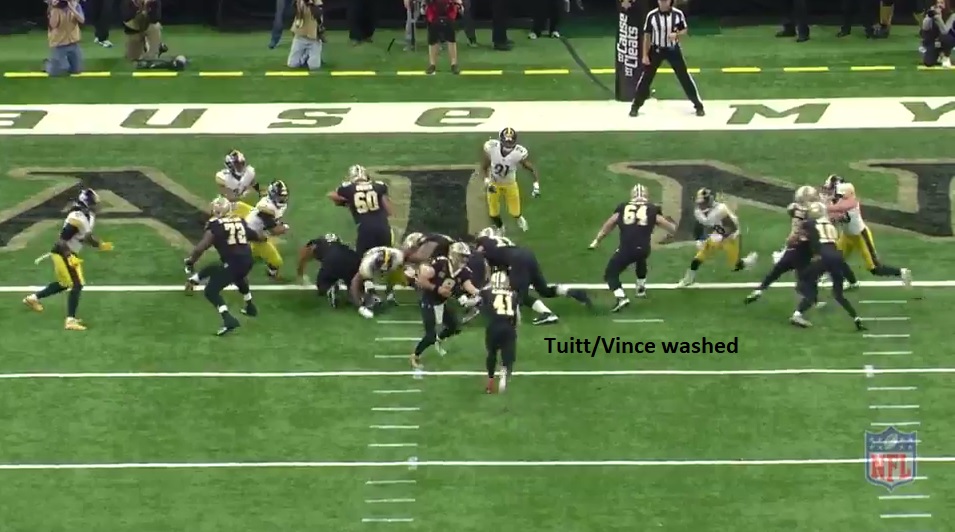 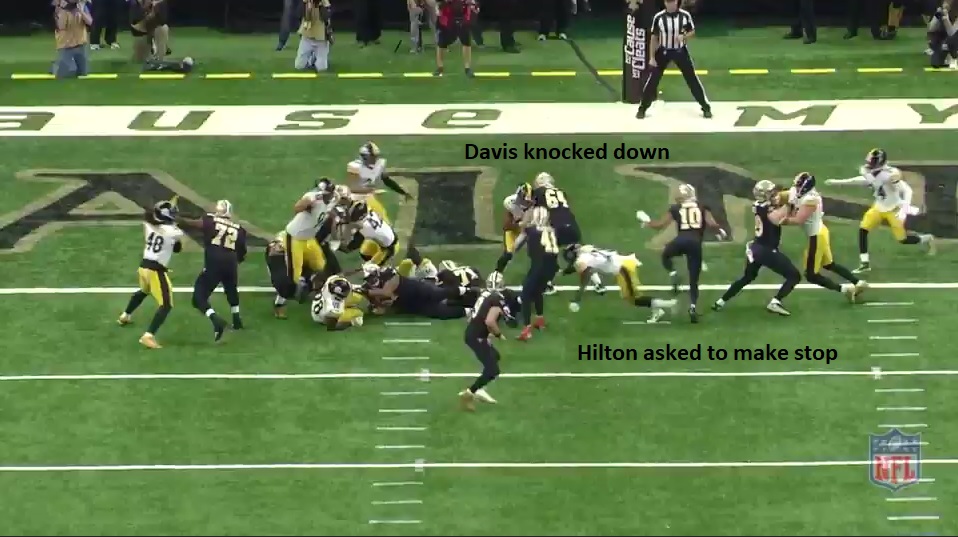 Clapp, the extra linemen, makes quick work of Sean Davis, bouncing him out of the way. The only Steeler with a shot here is Hilton, a feisty nickel corner but an impossible task to stop Alvin Kamara at the one yard line, a guy who has a solid 35 pounds on the corner (180 vs 215). Because of the down blocks, Kamara is able to leap over the line and into the end zone.

How can Butler look at this play and say with a straight face the defense had an opportunity to make a play here? Who has a chance to defend a run to the strong side? What individual technique is to blame here? I can’t find it. It’s on Butler for putting in the worst personnel grouping short of just not trotting out anyone. Match the personnel, stay in your base defense, and don’t make it easy on the Saints. This is being “cute” and trying to outsmart the opposition. It’s happened too much and has to stop.

One play wasn’t the only issue. There was Butler’s script of coming out and blitzing Drew Brees. Ya know, the QB with the quickest release in football. Hope you’re sitting down for this – it didn’t work. Brees was 7/11 for 85 yards and six first downs against a DB blitz. He was smart enough, I guess, to adjust and things improved. But it was a terrible idea and exposed an overmatched secondary against a Hall of Fame quarterback.

And yes, there was still that tiny problem of defending WRs aligned as #3. Linebackers, or at times, no one matched up on Michael Thomas, who succeeded there from start to finish. Like this 4th quarter catch that went for 17, only negated by an offensive hold. L.J. Fort asked to cover like a corner. Despite aligning with inside leverage, Thomas predictably blows by and then beats him to the sideline.

With Morgan Burnett and Cam Sutton available, the Steelers can’t fall back on the lame excuses they used before. Heck, Burnett was on the field that play. Butler rolled him down onto Mark Ingram. Let’s recap.

Linebacker on WR
Safety on RB

If the Steelers’ season ends next week, we may quickly learn of Butler’s fate. I’ll write my complete opinion on him, looking at the good, bad, and ugly, after Pittsburgh is eliminated, either next Sunday or after the playoffs.