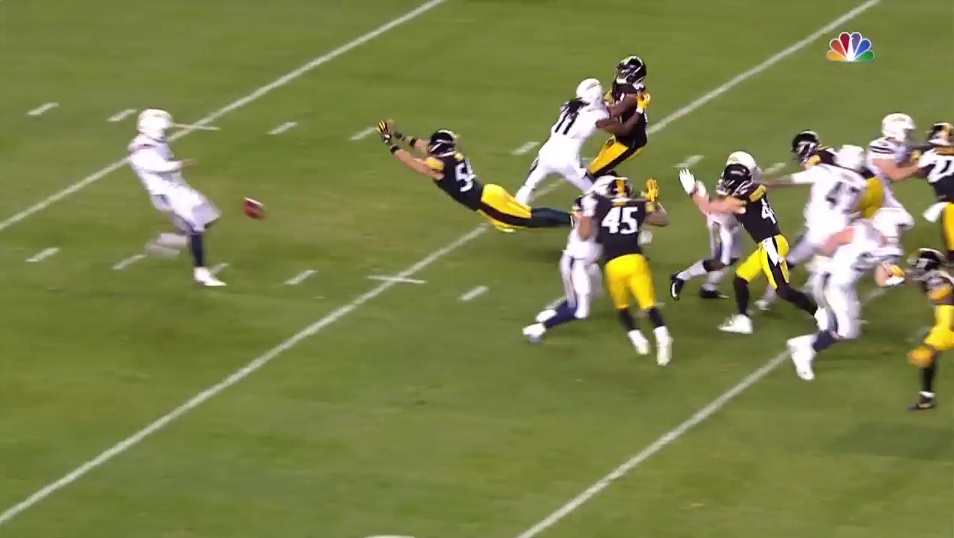 The Pittsburgh Steelers blocked another punt Sunday night. So you know that I’m diving in to cover it. L.J. Fort’s big play won’t technically go down as a block, the ball traveled four yards, but it produced a similar impact. A potential momentum shifting play, a short field for the offense, a chance for them to rack up some easy points. Let’s break it down.

You know I’ve said it over and over that no one creates better pressure on the punt block team than Danny Smith and the Steelers. How hard he’ll stress the protection unit, the games and overloads he’ll make you be ready to defend. He showed a relatively uncommon on the block, reaching deep into his bag of tricks.

On the snap, it looks like a standard seven man rush. Three on one side, four on the other. But Darrius Heyward-Bey rushes in from his usual jammer spot before the snap. The Chargers seemed to sense something was coming long before the play began. The upback – the quarterback of the unit – and the left tackle, #42, point it out and seem prepared for the possibility of DHB rushing in. 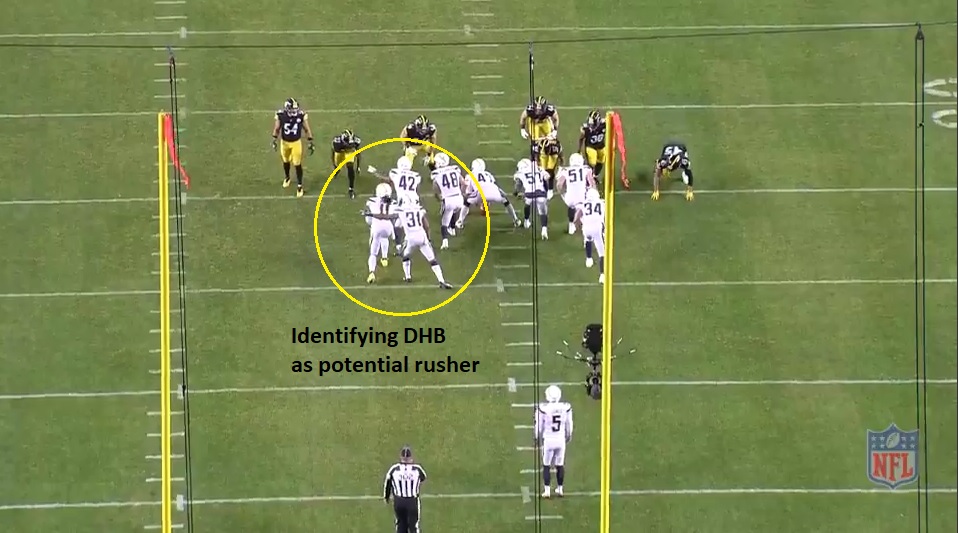 And that’s what happens. So now it’s an eight man pressure. To combat it, the left wing, wide receiver Geremy Davis, expands out to pick him up. That means the left tackle, #42 Uchenna Nwosu, has to slide down to pick up Fort. That’s now his responsibility. Everyone slides down a man.

But despite seemingly identifying the DHB rush, Nwosu doesn’t slide down properly to pick Fort up. The upback is sliding away, meaning there’s no one picking him up. Fort is rushing in free. 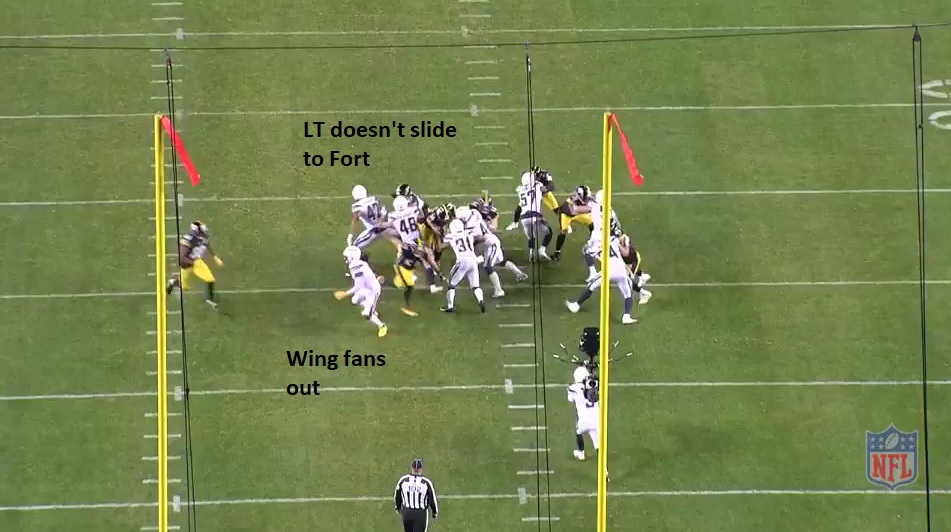 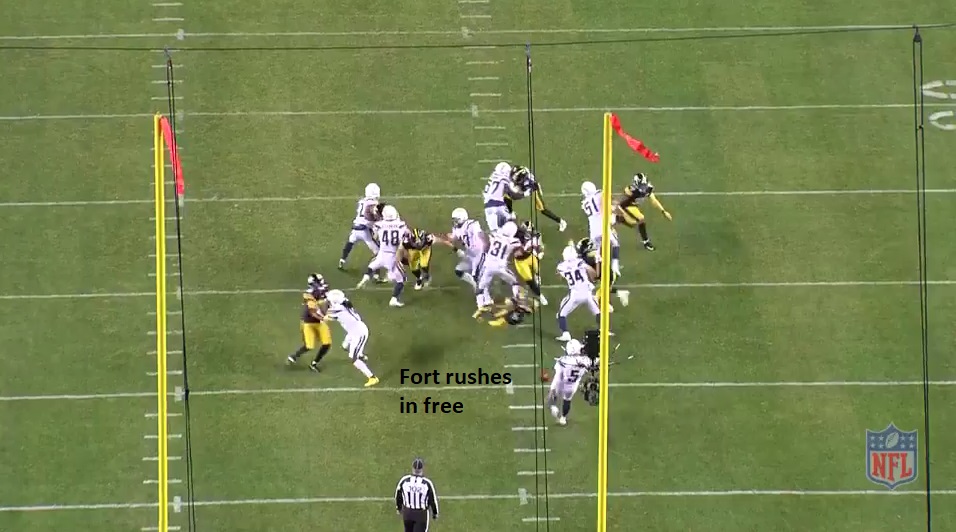 From there, it’s all about getting to punter Donnie Jones in time and playing with good technique to execute the block. Fort does an excellent job here. Times his dive, angling himself away from the punter as to not run into him, with thumbs together, palms out, fingers spread. 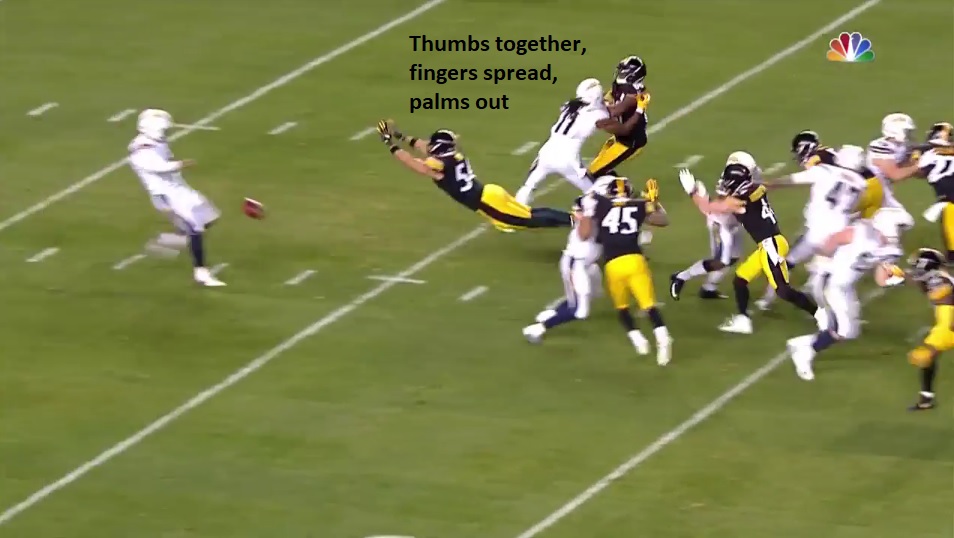 Jaylen Samuels nearly screws the whole thing up by trying to catch the ball, a very stupid decision, but Jordan Dangerfield bails him out by coming up with the ball in the pile.

The Steelers nearly had two blocks Sunday night. Earlier in the game, Marcus Allen came *this* close to notching one. Here, Smith has a full overload to the Chargers’ right side. Allen comes in unblocked but can’t quite time things up, missing the block by literally fractions of a second. 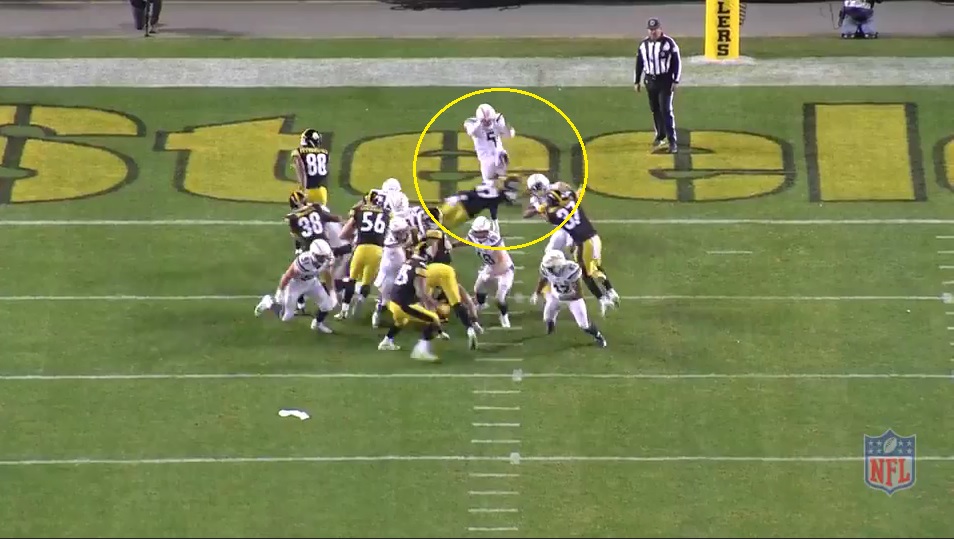 There were definitely far too many problems on special teams in the loss. But many of those issues were individual, not schematic. Unlike Keith Butler, Smith has largely put his players in position to win, as long as they execute. The fact the Steelers have blocked a couple punts this year and gotten close on so many more speaks to that. In this day and age, most teams aren’t getting home unless they’re doing something schematically to win.