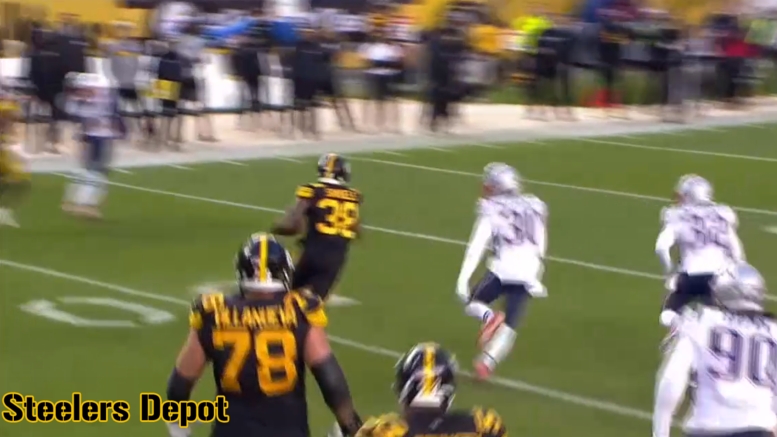 For the moment, it appears as though the Pittsburgh Steelers are going to be without James Conner for a third straight game. Should that prove to be true, they had better hope that the can block for Jaylen Samuels as they did Sunday evening, and that the rookie can continue to make the most of that work upfront.

Within his 142 rushing yards on the day were six carries that went for 10 or more yards, five of which I’m going to look at below. The longest, a 25-yard gain, came early, on the opening drive. The Steelers gave him looks that allowed him to survey the field and he quickly found an opening to the left behind Vance McDonald on a kickout block. He was able to get skinny through the B Gap and showed surprising quickness to the edge.

Later in the same quarter, he was able to break off a 10-yard run on second and one. Samuels hugged the line until Kyle Van Noy pinned himself to a position, giving the back a crease to hit the rightside A Gap. He slipped Van Noy’s tackle attempt for another five yards or so.

In the third quarter, on their opening drive as they got inside the red zone, the rookie broke off for 14 yards down to the Patriots’ four-yard line. This play was mostly about making a quick read and decision to turn the corner, reading a late Antonio Brown block to maximize his yardage.

In the fourth quarter, on second and short, Samuels picked up another chunk on a 15-yard gain. Playing against a dime defense, including Maurkice Pouncey on Patrick Chung up the middle, the back had a sizable hole to work with, not even getting touched for 10 yards down the field.

Finally, with just under three minutes to play, he added another 14-yard gain to cross midfield as he helped set up a key field goal to make it a seven-point game. Credit goes to JuJu Smith-Schuster for his block on the perimeter that allowed Samuels to cut inside of him. James Washington down the field as well.

Samuels himself looked like a different back from his first start to his second, something he acknowledged himself, but his blocking especially from the tight ends and wide receivers, was much more where it needed to be against New England as well. They’ll need all this to coalesce for a second week in a row down in New Orleans.