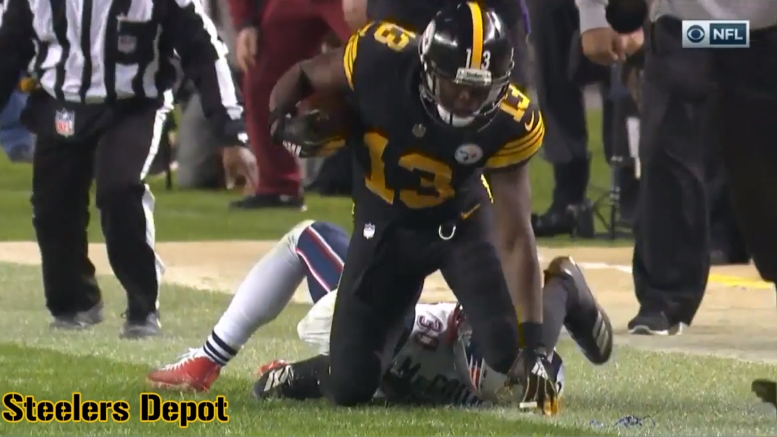 You probably noticed that Pittsburgh Steelers wide receiver JuJu Smith-Schuster crept up on the injury report yesterday, limited in practice for the day with a groin injury. While his teammates said that they believe he will be fine, it’s still not what you want to see, whether heading into a big game like they are or not.

So it’s a good thing that rookie wide receiver James Washington finally looked as though he might be breaking out, catching three passes for 65 yards on Sunday against the New England Patriots, both marks representing career highs. He caught his first deep target of the season for a 32-yard gain, and also broke out for a 24-yarder after making a defender miss a tackle.

Said offensive coordinator Randy Fichtner about the rookie and the potential of him starting, “I expect James to keep improving every week”, according to the team’s communications department. “Now you get a little taste of it and you can see the excitement in his eyes”. He also pointed to the great asset that is Ben Roethlisberger throwing him the ball.

Fichtner noted that the receiver “needs a little more consistency” following Sunday’s game, but was otherwise complimentary. “He’s actually been growing. You just kind of feel it”, he said. “It’s probably natural for rookies at certain times to kind of make that jump, and hopefully he did. That’s exciting for him and for us”.

Washington played 27 out of 38 snaps in the first half—including as the victory back in the victory formation—but played 16 of their 25 offensive snaps in the second, being featured more over Eli Rogers making his return to the field. His two explosive plays came in the first four plays of their first possession of the second half. He also showed well at times as a blocker.

“You could see” him playing with more confidence, and practicing as well, Fichtner said. “He’s getting a lot more reps and he’s going with the [scout] team, so he’s actually getting more reps that way, too”.

The Steelers introduced a five-receiver package on Sunday that I’m guessing they will continue to use this week as well against the New Orleans Saints, provided that everybody is healthy. That would help keep the rookie and Rogers, not to mention Ryan Switzer, involved without anybody getting lost in the shuffle.

Washington now has 13 receptions on the season for 153 yards and one touchdown. Heading into Sunday, he had only caught five passes for 39 yards in his previous seven games, and he also failed to dress twice in that span as a healthy scratch. He had five receptions for 49 yards and a touchdown from Weeks Two through Four.