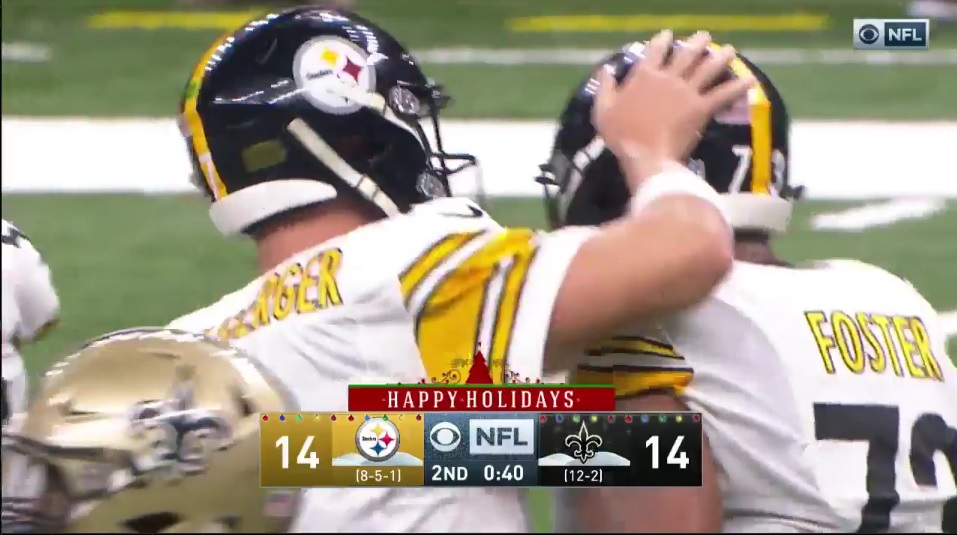 It’s going to be a Blue Christmas for the Pittsburgh Steelers this week. Their playoff hopes haven’t evaporated but certainly diminished following Sunday’s 31-28 defeat to the New Orleans Saints. Now, they’re relying on a Cleveland Browns’ win in addition to taking care of business this weekend against the Cincinnati Bengals. The odds of both those things happening aren’t great but Ramon Foster preferred to look at the glass half full.

“Absolutely man,” Foster told reporters when asked if he still liked the Steelers’ chances. “All we have is a chance. We’ll see what happens. We still have to go play Cincinnati this weekend. You never know what can happen.”

Based on the locker room quotes shown in that video, Foster was the most upbeat, though obviously, disappointed by the loss and the manner in which it happened.

“You can only control what you can control. Whether it’s a big play or an insufficient call. You just kinda sit with it and move forward.”

Foster paused before saying “insufficient call,” smart phrasing for someone wanting to avoid an expensive Christmas present from the league this week.

Now in his 10th season, Foster is tied for the second longest tenure on the team with Darrius Heyward-Bey, trailing only Ben Roethlisberger. He’s the veteran that’s seen it all before, the good and bad. So if there’s anyone who will remain optimistic, it’s him. As a leader on the team, it’ll help the team push through and take care of the business they’ve failed to do for most of the last two months, getting a win over the Bengals.

Though I agree those odds aren’t great, I put their playoff chances at about 20-25% (90% chance to beat the Bengals, 30% chance Cleveland wins), there is reason to share in some of Foster’s optimism. The Browns beat the Baltimore Ravens 12-9 in their first matchup, an overtime victory, and this is a better version of Cleveland right now.

Back then, Hue Jackson was still the head coach, Todd Haley the offensive coordinator, Baker Mayfield was making his second career start, and Nick Chubb saw only three carries that day.

Of course, the Ravens have improved in some respects too. Lamar Jackson is now starting, Joe Flacco played the first matchup, and few teams are running the ball more effectively than they are. Baltimore will – and should – be favored.

But the odds aren’t impossible. Appropriate for the quote and the holiday season, I’ll let Lloyd Christmas sum things up.