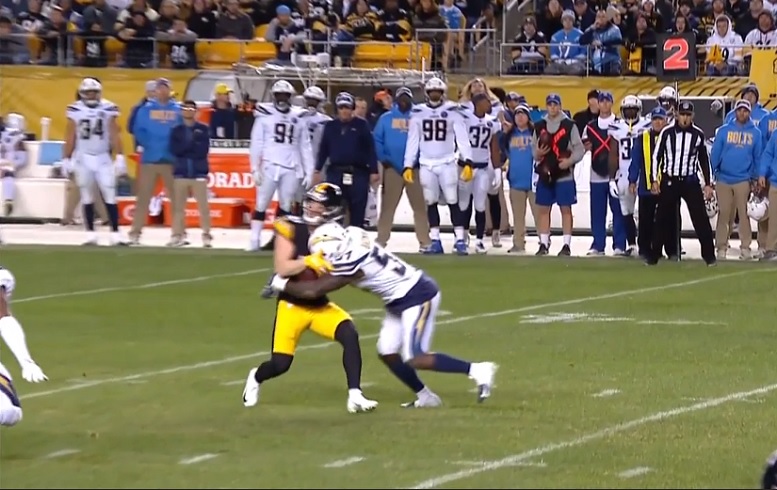 Pittsburgh Steelers wide receiver Ryan Switzer had to leave the team’s Sunday night loss to the Los Angeles Chargers due to a fourth quarter hit to the head and neck area. On Saturday we learned the player responsible for that illegal action was fined this past week by the league.

According to Ray Fittipaldo of the Pittsburgh Post-Gazette, Chargers linebacker Jatavis Brown was fined $26,739 this past week for his illegal helmet-to-helmet hit on Switzer in the fourth quarter of Sunday’s game at Heinz Field.

The hit in question happened on 2nd and 10 play from the Chargers 41-yard-line with 5:19 left in the fourth quarter. As you can see in the video of the play below, Brown hit Switzer helmet-to-helmet while the wide receiver attempted to catch a short pass from quarterback Ben Roethlisberger. Brown and the Chargers were penalized 15 yards for unnecessary roughness on the play.

Switzer left the game to be checked for a concussion after suffering that hit from Brown and never returned. He was then placed in concussion protocol and remained there until midway through this past week. Switzer practiced all three days this past week and is exopected to play Sunday against the Oakland Raiders.