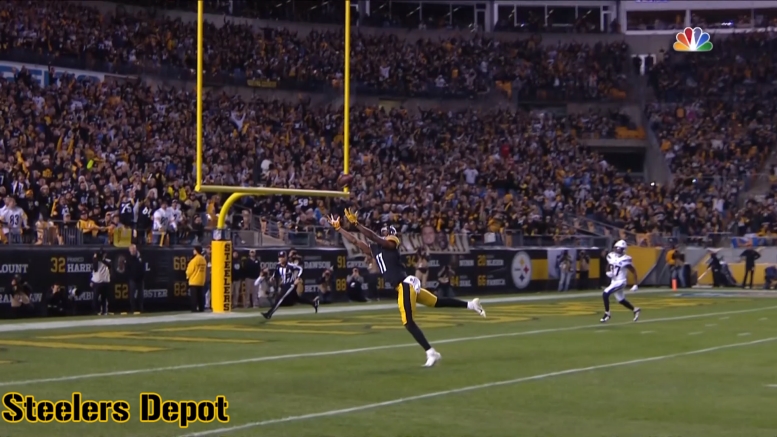 When it comes to generalities, Pittsburgh Steelers quarterback Ben Roethlisberger has never had difficulty in taking blame. You hear him often say that he needs to play better after a loss and things of that nature. He also always deflects all praise to his teammates.

It gets a little more complicated, and he becomes a little more testy, when you talk about specific plays, for whatever reason. Even in the past two weeks, he talked about putting passes where he wanted even though they were intercepted, even insinuating that the target—Antonio Brown in both cases—was culpable.

But he threw a pass so bad on Sunday that he ended up causing one of his targets to be injured, and he admitted that was on him yesterday on his radio show, even though he said that when the ball left his hands he thought he had made the throw that he wanted.

This is obviously in reference to the long throw to Justin Hunter that should have been an easy walk-in touchdown had Roethlisberger not overthrown the 6’4” wide receiver. “It’s one of those ones where he ran a great route, we had a great play calledv”, he said.

After Roethlisberger was able to look the safety off, Hunter was left open, and then wide open, with no defender near him by the time he approached the goal line from a long way out. All Roethlisberger had to do was throw a lob that the receiver would run under.

“I tried to look the safety toward AB to the right. So you let it go before he’s completely open, but he’s still open, and I thought I threw a good ball. I really did. I thought I put it where I wanted to, but it was too far, and that’s on me”, he said.

“I feel bad. I told Justin, because he got hurt on that play, I feel bad, I wish I could have thrown a better ball and he wouldn’t have gotten hurt. If I would’ve thrown a better ball he wouldn’t have gotten hurt”, he went on. “So I don’t know if it’s just lack of repetition [between] he and I, whatever it is, but you have to connect on that throw, and that’s on me. Like I said, I didn’t think it was a bad ball, but obviously it was, so it’s frustrating”.

Roethlisberger’s accuracy on deep passes early in the season was quite poor, similar to a year ago, but in both seasons it has improved over the course of the year. He has thrown a number of touchdown on deep passes in just the past few weeks, for example, and connected with Brown a couple of times on Sunday on long balls.

But this particular long ball forced Hunter to stretch out to even make an attempt at catching it. He ended up landing awkwardly on his shoulder, resulting in an injury that was serious enough to prompt the Steelers to place him on injured reserve yesterday.