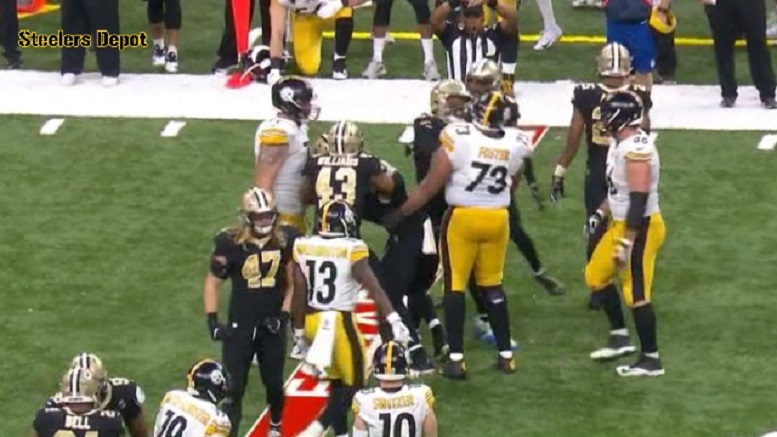 Prior to the New Orleans Saints Sunday home game against the Pittsburgh Steelers, defensive end Cameron Jordan took a shot at quarterback Ben Roethlisberger through the media as he not only questioned the Hall of Fame credentials of the two-time Super Bowl champion, he also said it’s in his belief that he’s not even a one of the top-five at his position currently playing. Jordan, who finished Sundays game with two total tackles and a pass defensed, also took a physical shot at Steelers guard Ramon Foster right after the game-losing fumble by wide receiver JuJu Smith Schuster occurred.

You can see a gif of Jordan’s quick altercation with Foster following the Saints defense recovering the fumble by Smith-Schuster and on Monday morning Roethlisberger was asked during his weekly interview on 93.7 The Fan to comment on the Saints Pro Bowler punching his offensive lineman at the end of Sunday’s game.

“Yeah, throwing a punch at a guy at the end of the game, I didn’t even see it happen right there, but I heard about it and it’s just lack of respect for the game,” Roethlisberger said of Jordan punching Foster. “It’s just sad.”

Roethlisberger was asked on Monday if he heard Jordan mouthing off any to him at any point during Sunday’s game in New Orleans and he said that he didn’t.

“I didn’t hear it if did,” Roethlisberger said.

Monday was also the first time that Roethlisberger was asked to comment on what Jordan said about him last week to the New Orleans media. He was asked if he just shrugs those kinds of comments made by Jordan off.

“Yeah, just let it roll right off your back,” Roethlisberger said. “You don’t have time to deal with things like that.”

In total, Jordan was credited with two hits on Roethlisberger’s during Sunday’s game to go along with his two total tackles. One hit came during the 1st and goal incomplete pass attempt by Roethlisberger to fullback Roosevelt Nix from the Saints 2-yard-line with 1:13 left in the first half. The second one came late in the game on an 1st and 15 incomplete deep pass attempt from Roethlisberger to rookie wide receiver James Washington with 1:25 left in the fourth quarter.

As for Jordan’s late punch of Foster, he was penalized for unnecessary roughness after striking the Steelers guard and it will now be interesting to see if he’s fined for his actions this week.