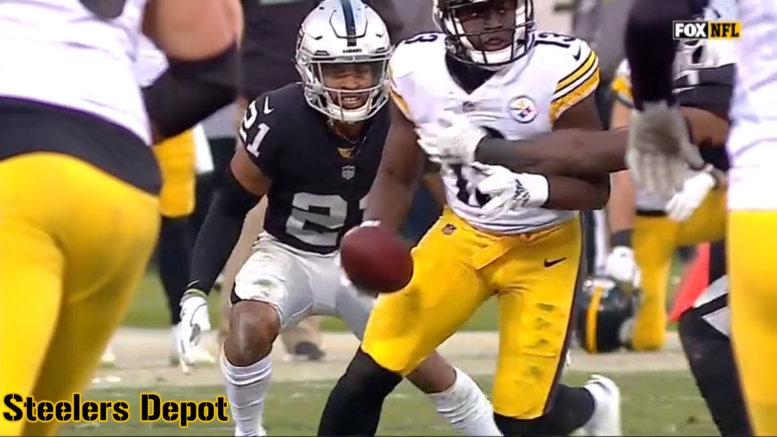 James Washington was benched for the second time this season a week ago during the Pittsburgh Steelers’ game against the Los Angeles Chargers after he struggled on multiple plays the week prior to that in their loss to the Denver Broncos. He was previously benched against the Cleveland Browns coming out of their bye week in Week Eight.

In both cases, the Steelers made sure to throw him a relatively high volume of targets in the next game, five and four respectively. Though he only came up with two receptions in each game, he drew praise both times for the strides that he made, the incompletions generally not being his fault.

Washington, who only played 22 snaps, caught two passes officially for 11 yards, but one of those receptions was on a gadget play, a hook and ladder on which he caught a pass for nine yards before coming back to lateral the ball to JuJu Smith-Schuster, who ran up the sideline for another 43 yards.

Quarterback Ben Roethlisberger was asked about how he felt Washington did in his first game back since his second benching, speaking to reporters during his locker room media availability, saying that the rookie did “awesome”.

“I really think he made some plays for us”, he said. “There was a couple things, I think, when we watched it on film that he would even say he could probably improve on, but we all have those moments if we just graded ourselves, and there are a lot of minuses on my sheet”.

Of Washington’s four targets in the game, three came from Roethlisberger, the other from Joshua Dobbs, which came on third and 10 and was not placed well, resulting in the defensive back being able to get a hand on it and break it up. The other incompletion came on second and nine from the Raiders’ 15 when Roethlisberger overthrew him in the end zone, the ball landing out of bounds.

“I thought that he answered the challenge, especially that last play, what he had to do to make it, was pretty cool”, the quarterback said of Washington’s efforts on the hook and ladder reception that allowed the Steelers to have an attempt at a game-tying field goal.

With Justin Hunter now on injured reserve, Washington likely will be active for the remainder of the season, unless Eli Rogers is activated from the Physically Unable to Perform List and takes over his playing duties.

Obviously the Steelers are hungry to see the rookie become a meaningful and consistent contributor to the offense sooner rather than later. Will we get a chance to see that by the end of the season?