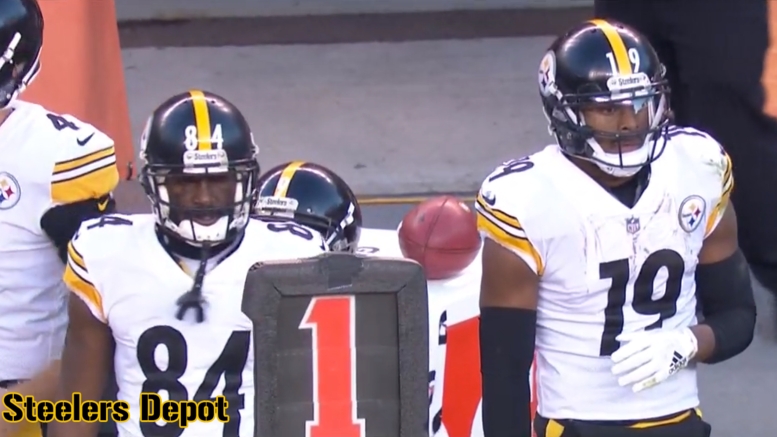 The last several years have been an interesting transition for Antonio Brown. When he first came into the league, he surrounded from older players from whom he could learn, such as Hines Ward and Antwaan Randle El, and later, Jerricho Cotchery. Even Darrius Heyward-Bey filled and perhaps continues to fill that role to a degree.

But now more than ever, he is the elder statesman in the wide receiver room, with the three other receivers who chiefly play with him having fewer than two seasons of NFL experience under their belts in JuJu Smith-Schuster, James Washington, and Ryan Switzer.

That has changed the dynamic in the wide receiver room somewhat, but while it doesn’t get publicized a lot, he has been an important influence for the younger players on the team, even beyond merely serving as an example of work ethic and greatness. Smith-Schuster in particular has tried to make that clear.

And Brown sees what his 22-year-old partner has been doing. Asked about his success through his first 25 games, he said of Smith-Schuster, “he’s a stud. He wants to be great. He’s inspired by the game, and he wants to be the best, and that’s what makes him so special. It means something to him. You can tell by the way he works and the way he goes about his business, he loves the game”.

To be perfectly honest, it’s not often that Brown gives a really good answer to an interview question. He mixes in a lot of non-answers with nonsense answers, but when asked about Smith-Schuster, he managed to have a mouthful to say that, in my opinion, shows the connection that the two have.

“He’s motivated and inspired”, he said of what makes the second-year player so successful. “When he isn’t getting a second DB and he’s getting one-on-one coverage, he takes it personal. He’s gonna win and he’s gonna make the defense pay. If you want to take away AB, then JuJu’s gonna make you pay”.

The Denver Broncos made it ‘personal’ so to speak in the last game when they swung a single-high safety to Brown’s side from the three-yard line, which resulted in Smith-Schuster burning the defense for a 97-yard touchdown, on which he also threw a block.

Much has been made about comments Ben Roethlisberger or others have said over the past few days, but both of these receivers have handled those remarks and the subsequent media spin very well. When asked about Roethlisberger saying he wanted to go to Smith-Schuster four times at the end of the game, he said he has 800 catches with Ben, and he thinks Smith-Schuster could have four.

I think the way they handled it is a testament to the fact that they really do have a significant professional relationship and they each want to see the other be successful and to drive each other to greatness. Hopefully we get to see that live on for at least a couple more years after this.