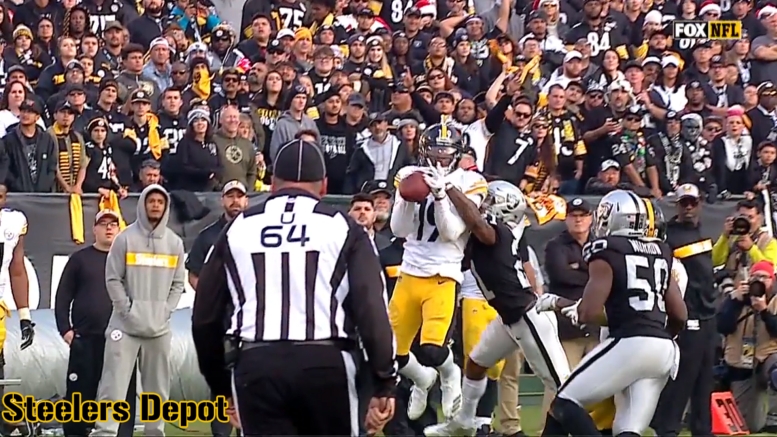 Opinions are a very personal thing. Biases are a very weird one. Not actually having the opportunity to more deeply examine an immediate observation—or choosing not to due to a previous bias—can lead to some pretty heated opinions.

I saw a bit of that earlier this week when I wrote an article about second-year quarterback Joshua Dobbs’ struggles on Sunday during his first extended action in a meaningful game, in which multiple commenters who were very vocal Dobbs supporters in the preseason chose instead to blame key incomplete passes on the wide receivers.

The problem is that they were not dropped passes, but rather passes that were defended by Oakland Raiders defenders. In fact, the Pittsburgh Steelers did not have any drops on Sunday, but many of their incompletions ended up being tightly contested and could have led to some confusion. I will look at three of them below, though I exclude the Dobbs interception targeting Antonio Brown.

The first play I’ll look at came in the middle of the first quarter with Ben Roethlisberger obviously still at quarterback. On a third and six, he looked for JuJu Smith-Schuster, but Nick Morrow was able to make a play on the ball thrown in a tight window. The replay clearly shows the ball ricochet off of Morrow’s hand in front of the receiver’s.

The majority of Dobbs’ incomplete passes were contested well by the defense, with the quarterback partially responsible for that either due to the timing or placement of his passes. Take this third and 10 throw to rookie James Washington early in the third quarter.

Dobbs’ throw puts the ball in a place cornerback Daryl Worley can reach to defend, high and away rather than in the numbers and to the inside. Washington tried to work his way back up to the ball while staying ahead of the sticks, but he ran out of real estate and Worley made the play.

In the fourth quarter, once again on a big play on third down, Dobbs looked for Smith-Schuster needing four yards for a new set of downs. This was a pass the receiver was accused of dropping, but the replay makes it plainly clear that Gareon Conley got his hand on the pass in between the receiver’s arms as he attempted to field the pass.

That’s not a drop, just a great defensive play. And again, a play that the placement of the throw helped to make possible. If this pass was thrown to the outside, it’s likely a pretty easy conversion that doesn’t make him leave his feet.