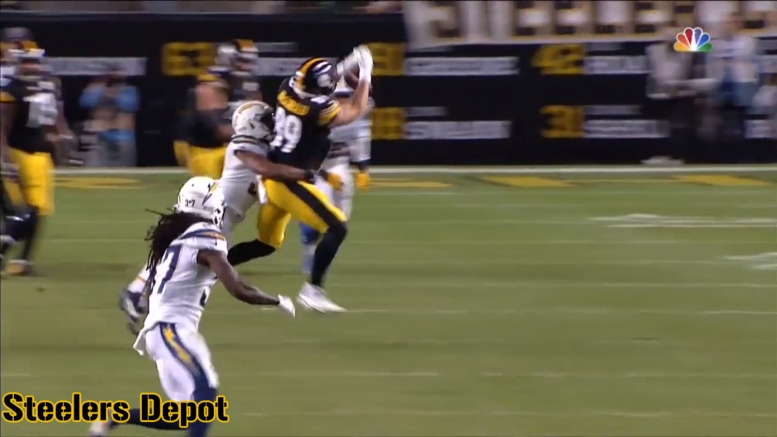 I’ve got to be honest, I was liking these dropped passes reports better when I had nothing to cover. Last week we had five different plays to evaluate, though not all of them were drops. From Sunday’s game, I identified three passes for the Pittsburgh Steelers I felt were worth closer inspection, though I only determined that the first two were drops.

This was an early play that seemed to go ignored a bit, but on the first play of the Steelers’ last possession of the first quarter, Ben Roethlisberger looked in the direction of JuJu Smith-Schuster in the flat.

The quarterback’s pass was high, making the receiver leave his feet to try to go up and get it, but there is no reason this ball should have gone off his hands. It wouldn’t have been a big gain either way, but it’s still a drop, even if the throw contributed to it.

Fortunately there wasn’t another dropped pass until the fourth quarter, though there were a couple of balls that were broken up I considered taking a closer look at. The second drop came from Vance McDonald, who started off the season very clean in terms of his hands, but who has been putting more balls on the ground in recent weeks.

This one was a big one, coming on third and five from the Steelers’ own 30 in a 23-15 ball game. His failure to come up with this catch forced them to punt, and as you might guess, this was the punt that Desmond King, aided by illegal blocking, returned for a game-tying touchdown and subsequent two-point conversion.

More about the play itself, McDonald broke to his right on a scramble drill but the defender did a good job of following closely with him. While he got a bit grabby before the arrival of the ball, this was ultimately on the tight end. McDonald had a clear opportunity to get both hands on the ball and make a secure catch. He just didn’t.

One other play I want to look at came in the middle of the fourth quarter early on the Steelers’ game-tying drive. The ball went to Smith-Schuster, but he was quickly met by Michael Davis.

You could argue that you want to see Smith-Schuster do a better job of securing this ball and tucking it away, but in this instance the defender was able to get a clean shot on it, knocking it loose, so that’s why it’s not going down as a drop.