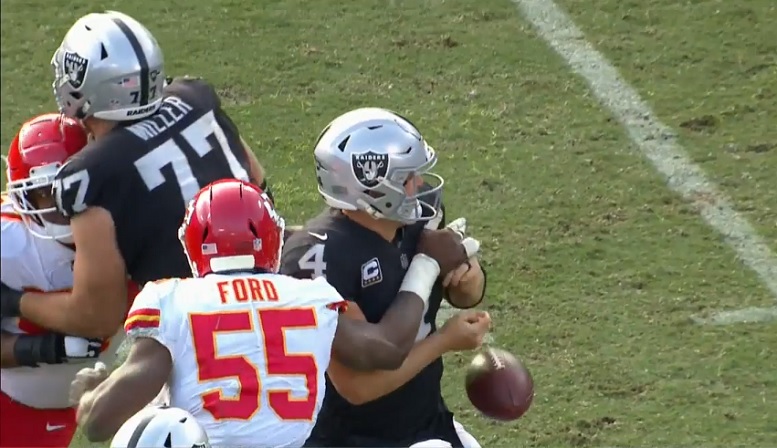 Question: Can the Steelers get the ball out of Derek Carr’s hands?

While Raiders quarterback Derek Carr has thrown eight interceptions this season, as Dave Bryan has pointed out, it’s been a long time since his last. After throwing at least two in three of his first four games, he has gone seven games without throwing one, spanning over 200 pass attempts.

In that same time, however, he has fumbled the football seven times and lost seven of those fumbles. As soon as he stopped throwing interceptions, he started fumbling. He didn’t have any fumbles during the Raiders’ first five games.

Tomorrow, he will be going up against, among others, T.J. Watt, who has recorded four strip sacks this season. The recently activated Olasunkanmi Adeniyi also had two strip sacks during the preseason, it might be worth noting. He saw nine snaps in his NFL debut last week.

The Steelers have been okay in recovering fumbles this year. Two of Watt’s strip sacks have been recovered, one of which came in the end zone for a score. The team has had a hard time intercepting passes, so I wouldn’t bet on that streak ending against a quarterback who hasn’t thrown one in hundreds of dropbacks.

But they do stand a realistic chance of getting to Carr. The Steelers have been one of the most efficient teams in the league in generating pressure, and the Raiders’ offensive line, in part due to injury, has struggled to provide him with adequate protection.

Meanwhile, running back Jalen Richard has fumbled twice on a little over 90 touches. He fumbled eight times in about 80 touches a year ago. So overall it certainly seems as though the Steelers’ best chance of creating a turnover in this game is by forcing the ball out rather than picking off a pass.