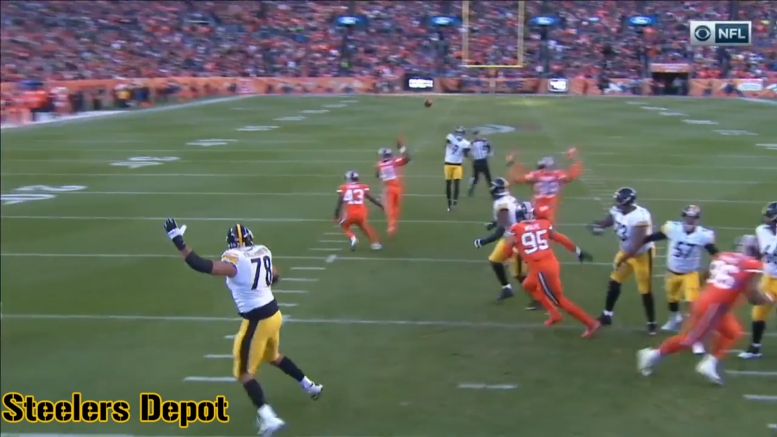 The Pittsburgh Steelers have pulled off a good fake punt or two over the course of recent years, but fake kicks have been harder to come by, and some have failed rather miserably. That was far from the case on Sunday when kicker Chris Boswell completed a two-yard touchdown pass to left tackle Alejandro Villanueva. And why did it work so well? Because nobody except for the Steelers players on the field, Head Coach Mike Tomlin, and special teams coordinator Danny Smith likely knew it was coming.

Even quarterback Ben Roethlisberger said during his radio show yesterday that he didn’t know. He was standing there next to Tomlin as it unfolded and he simply thought that Kameron Canaday had shanked a punt. He was convinced that they had to settle for points and kick the field goal after having one blocked and a touchdown turn into a touchback.

But the real reason it worked—aside from the fact that the Denver Broncos only had 10 men on the field—is because the group gave no indication that it was any different from any of their other kicks. All the same personnel, outside of injury replacements, were out there in their usual positions.

That includes Villanueva, who has consistently lined up to the right of the right ‘tackle’ along the formation. The only deviations from their typical formation included Vance McDonald playing as the second-team left wing and Chukwuma Okorafor as the third-team right ‘guard’ in place of the injured Stephon Tuitt and Marcus Gilbert and Matt Feiler, respectively.

There was some confusion as to whether or not that fact that Villanueva declared himself as eligible was unique, but as Bob Labriola confirmed, that is always the case because of his number and where he lines up in the formation. The same is true of Cameron Heyward and Tuitt.

So when the Broncos lined up to defend that last-second field goal at the end of the first half, they had no idea they were going to be getting more than they bargained for. But that should be expected when even the team’s quarterback doesn’t know that it’s coming.

Of course, one special teams play doesn’t right all wrongs, and they still had an early field goal blocked. We know about some other high-profile special teams miscues this year as well, such as the botched safety kick on which they lost possession because they failed to field the ball.

Danny Smith’s tenure as special teams coordinator for the Steelers has certainly been an interesting one, far from a plateau, and rather a series of peaks and valleys. One minute it’s an asset that makes a difference-making play, and another produces a costly mistake. It’s hard to know when he’s all out of gum.