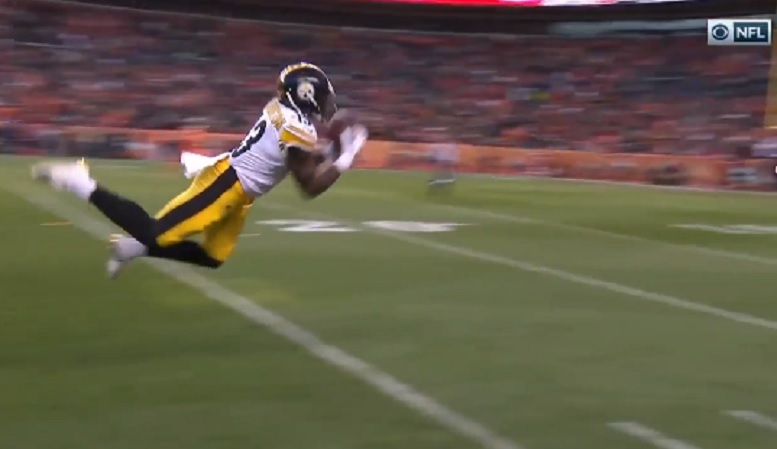 To say that Pittsburgh Steelers rookie wide receiver James Washington is having a horrible first season in the NFL might be a bit of an understatement.

Washington, who entered Sunday’s game against the Denver Broncos with just 8 receptions for 77 yards and a touchdown, failed to add to those totals during the contest despite being targeted 3 times. To make matters worse, Washington, the Steelers second-round draft pick this year out of Oklahoma State, dropped a deep pass down the right sidelined with 4:40 left in the third quarter despite being wide open. He seemingly and unnecessarily dove for the football as well.

While Washington made a living catching deep passes during his four seasons at Oklahoma State, he’s failed to register a deep reception so far in the NFL. This past week, Steelers quarterback Ben Roethlisberger talked about Washington when asked to explain the transition some young wide receivers need to make when they come from college into the NFL.

“I do think college football offenses are ruining players”, he said. “You look at guys like James Washington .He played on one side of the ball and I am sure his route tree wasn’t as in depth as it is here, so he’s really had to take a lot of steps and learn how to play both sides and learn how to run every route in the tree. So, I think it definitely could be hard for young guys coming in but the more precise you are in college, the more routes you run in college, obviously the transition will be easier”.

Washington’s transition has been far from easy and at this point you have to wonder right now if he might be sat down for another game or two in lieu of fellow wide receiver Justin Hunter. Since being made inactive for the Steelers Week 7 game against the Cleveland Browns, Washington has only caught 3 passes for 28 yards on 11 total targets. That’s obviously not going to cut it and especially with the amount of snaps he’s been playing.

If Sunday’s dropped deep ball wasn’t bad enough, Washington’s illegal block above the waste penalty early in the third quarter wiped out an 8-yard run by running back James Conner. That penalty resulted in the Steelers opening drive of the second half stalling a few plays later.

The Steelers now have five regular season games remaining with three coming against very good teams that can score some points. Heading into that tough stretch of games Washington can easily be considered more of a liability than he is an asset, And even though Hunter doesn’t contribute on special teams and isn’t much of a receiving threat in his own right, him taking over Washington’s helmet for the next few games might be the right thing to do.