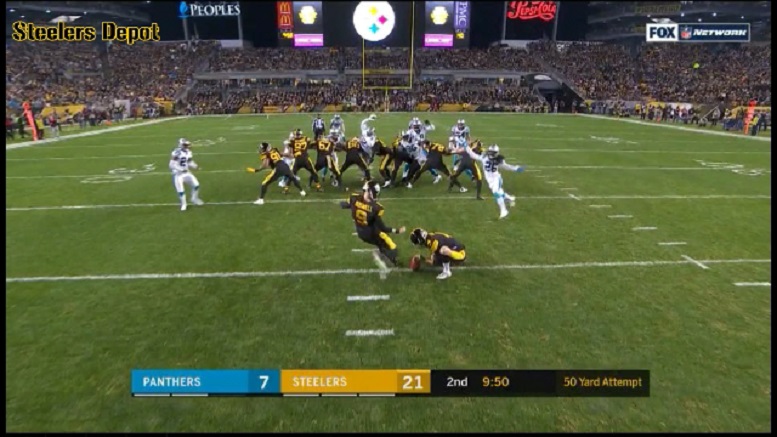 While the Pittsburgh Steelers got great performances from several different players in their Thursday night home win over the Carolina Panthers, it’s important to note that kicker Chris Boswell was one of them.

Boswell, who had entered Thursday night’s game having only made 7 of his 11 field goal attempts on the season and 22 of his 26 extra-point tries, was perfect on all 8 of his kicks against the Panthers. While 7 of those 8 kicks were extra-points, his lone field make was from 50 yards out and midway through the second quarter when the game was still very much in question. It was Boswell’s longest attempt of the season and not only did he make the kick, it would have likely been good from at least 10 more yards out.

After the game was over, Steelers head coach Mike Tomlin was asked to comment on Boswell’s 50 yard field goal and if he though it was important for his kicker to make that long attempt.

“It was important for me,” Tomlin said. “I don’t know if it was for him, but I enjoyed it.”

During Boswell’s first half of the season struggles, Tomlin remained patient with his kicker, who had signed a four year, $16.8 million extension with the Steelers just prior to the start of the regular season. That patience will now hopefully continue to pay off for the Steelers moving forward as they start inching closer to a few games that are sure to be played in some colder inclement weather.

Last season, Boswell made 35 of his 38 total field goal attempts during the regular season and was 4 for 4 on attempts of 50 yards or longer. It resulted in him being voted to the Pro Bowl.

And Boswell will try from 50, it would be a season-long.