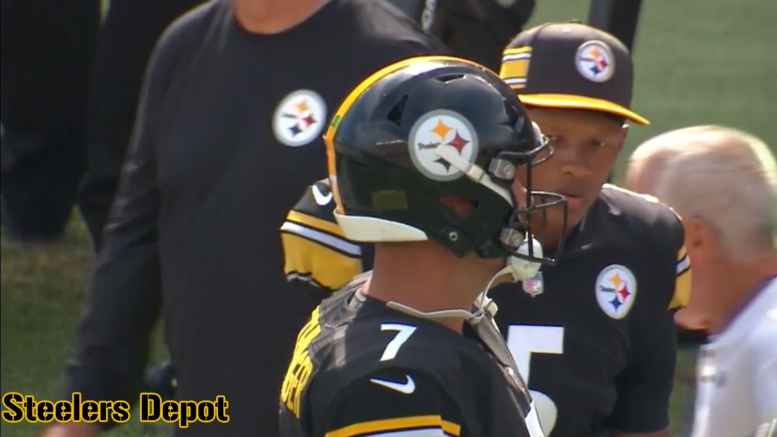 Much has been made over the course of the past few days about the first and only pass that Pittsburgh Steelers quarterback Joshua Dobbs has thrown in his career, completing a 22-yard pass on second and 20 from the team’s five-yard line after Ben Roethlisberger had the wind knocked out of him on a scramble Sunday that was negated by a holding penalty.

Too much, frankly, has been made about it. Not because it wasn’t a good play, but because the trajectory of his career isn’t about making one throw. It’s about putting in an entire body of work, and that’s something that we don’t get to see.

Head Coach Mike Tomlin sees it every day, however, and that is something that he talked about on Monday during his pre-game press conference ahead of tomorrow’s game against the Carolina Panthers. Asked why the team felt confident giving him that play to make, he said that it was built upon a collective resume and a consistent attitude.

“More than anything, he comes in here every day with the mentality that I’ve talked about in terms of trying to get better”, he said, and that is something Tomlin also mentioned after Sunday’s game. He especially highlighted the mentality that he brought to this summer’s backup quarterback competition during which it seems as though the odds were heavily stacked against him.

“That guy was challenged in a big way to earn the job that he has, the role that he has for us, and he has never blinked at any point in the process, even when it was seemingly stacked against him”, he said of Dobbs Sunday. “Because of that, we have a great deal of confidence in him and it was displayed, and he confirmed it with his play”.

And because of his ability to win that competition, he has also earned more opportunities to improve his craft on a weekly basis. After calling him a “uniquely mature” individual after the team, Tomlin added on Monday that he also has a “unique opportunity” to practice behind a veteran such as Roethlisberger.

“He’s got a unique opportunity in that he backs up a seasoned veteran like Ben, which provides maybe some more opportunities to get first-team reps. I like the spirit in which he approaches those days”, the head coach said.

Nothing, of course, was said of Mason Rudolph, this year’s third-round draft pick. 2018 isn’t about Rudolph and was never going to be. He is for the future. But Dobbs is the present at number two and will have his say for 2019 and beyond as well.