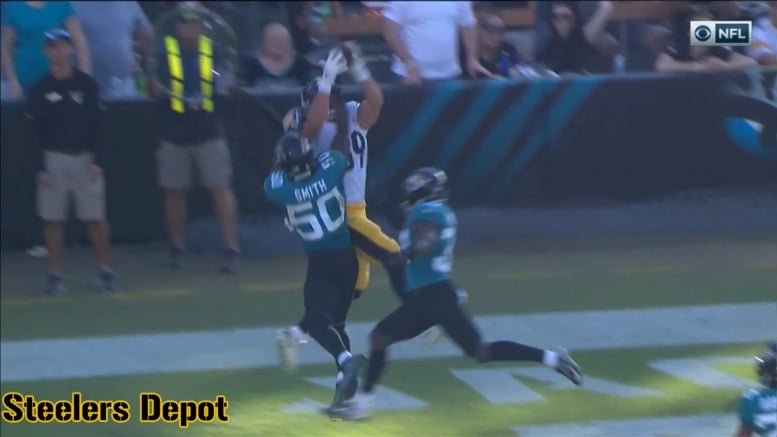 In spite of the fact that the significant increase in offensive production from 2017 to 2018, Pittsburgh Steelers Head Coach Mike Tomlin denies that he has seen meaningful growth and progress in tight end Vance McDonald form his first season with the team to his second.

That wasn’t a comment made in criticism of the sixth-year tight end, but was actually rather a compliment. Essentially, he was saying that the only reason he hasn’t been doing throughout his time here what he has shown recently is because he hasn’t been healthy enough to do it on a consistent enough basis to get noticed.

McDonald caught his third touchdown reception of the season on Sunday against the Jacksonville Jaguars, and the second in as many games, in both instances making fantastic athletic catches in the back of the end zone.

His three touchdowns is one off of his career-best of four set in 2016, his final season with the San Francisco 49ers before they traded him to the Steelers in late August of 2017. McDonald had only one touchdown that year on 14 receptions for 188 yards, but he was limited to just 10 games due to injury, and he missed extended time in or did not finish several of those games.

This year, he suffered a significant foot injury in training camp, but only missed the season opener and has been no worse for wear since, playing in the past nine games without incident. Since then, he has set new career-highs with 33 receptions for 417 yards.

He is currently on pace to record 55 receptions for 695 yards and five touchdowns in 15 games, which would certainly be the best season by a tight end since Heath Miller retired. Miller, in fact, has only had more than 695 receiving yards in three seasons, though he had at least 55 receptions five times. He has also had five or more touchdown receptions in five seasons.