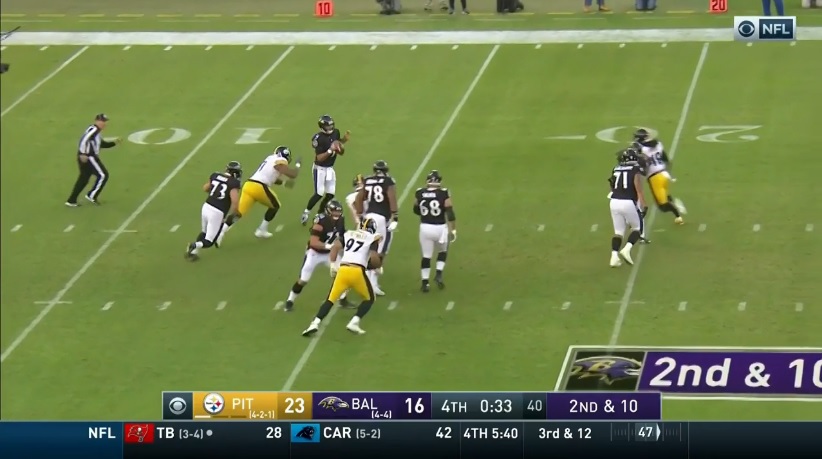 Then he took another one after the game was won.

Following the Pittsburgh Steelers 23-16 victory over the Baltimore Ravens, where Tuitt finished things off with his third sack of the season, he took to Instagram with this post and caption.

I think we was pretty physical today. #doittuitt #steelers

“I think we was pretty physical today.”

During the week, several reported the Steelers’ defense took exception to Flacco’s comments following the first meeting. Flacco told the media that game, a 26-14 victory over the Steelers, that it wasn’t the toughest Pittsburgh defense he’s ever faced.

The defense seemed to take it personally and use it as bulletin board for an improved performance during the rematch.

“I don’t like that comment,” safety Sean Davis told the Post-Gazette, “because I feel like Baltimore week, I’m already preparing my body as if there’s going to be a bruising. We’ll see if he has the same response after this game.”

The Steelers hit Flacco twice on the Ravens’ first drive. Though pressure was inconsistent and Keith Butler’s blitzes not always effective, they finished strong. By game’s end, Flacco was sacked twice and the Steelers dominated on third down, holding Baltimore to just 4/12. A major difference from their first meeting when the Ravens controlled the ball throughout.

With the win, Pittsburgh adds to their AFC North lead. The Ravens? They drop to below .500 on the year, now wondering if they can even compete for a Wild Card spot as rumors swirl about John Harbaugh’s future leading the team.

He who laughs last laughs best. Sunday, the Steelers got the last laugh. And if the Ravens want to chuckle about anything, it might hurt a little bit. Not sure if Flacco noticed but the Steelers were pretty physical today.