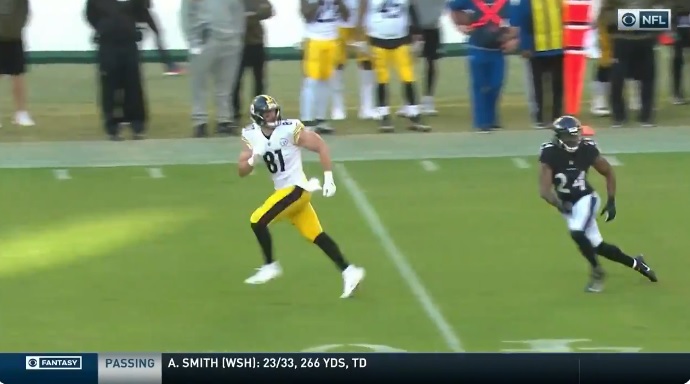 Winners and losers from the Pittsburgh Steelers big 23-16 over the Baltimore Ravens.

James Conner: Ho hum, here he is again. Randy Fichtner had a good gameplan to make the run game more effective time time around. Run 11 personnel instead of starting heavy like he has the last two weeks. Conner ran hard and set a physical tone for a game where that’s a requirement. He continues to be an asset out of the backfield, not just on checkdowns this week. Designed plays to get the ball in his hand and working hard in scramble drills for Ben Roethlisberger.

Alejandro Villanueva: Can credit much of the offensive line and I wouldn’t hate you if you put the whole front five on this list. But Villanueva had a tough matchup against Terrell Suggs and repeatedly won. Liked his physicality overall and ability to sniff out Baltimore’s blitzes.

Antonio Brown: Brown should’ve had a better game but Roethlisberger struggled with ball placement and hitting him. But his touchdown was vintage AB, making two defenders look silly en route to the end zone.

Sean Davis: Davis hasn’t been super impactful in terms of splash plays, and yes, that’s an obvious issue, but his tackling has really been reliable for the last month. Physical but controlled, he’s done well in his move to free safety.

Third Down/Red Zone: Tomlin stressed situational football and possession downs. The Steelers responded. Red zone offense continued to be strong while the third down offense did a 180 from the Week Four disaster (2/12 that day). Today, the Steelers went 10/16 and picked them up in crucial situations, including to close out the game.

Morgan Burnett: Burnett was put in some tough matchups and some good throws/catches against but he struggled after shutting out David Njoku last week. Allowed two catches for 50 yards and a pass interference call that put the ball on the one and led to a Ravens’ touchdown.

T.J. Watt: Bud Dupree managed a couple of pressures tonight in a good matchup for him. Orlando Brown looks like a good RT for Baltimore but I was hoping for more out of Watt. He got put in some tough spots in the red option game too. Did draw one holding call but very quiet for large chunks of the game.

Butler’s Blitzes: Keith Butler certainly wasn’t shy in dialing up pressure but they struggled to get home. At some point, you gotta back off. That’s partly on him but guys like Vince Williams and Mike Hilton, the latter who struggled to time his blitzes, also have to win their matchups.

Chris Boswell: Another missed extra point. As the broadcast pointed out, they’ve all hooked and missed to the right. First miss in a couple weeks but it certainly doesn’t leave you feeling anymore confident in the job he’s done. Or that his woes are behind him for good.

Ben Punting: Just a really bizarre decision to run on third and ten, nearly go for it on 4th, and then ask Roethlisberger to punt. The Ravens knew it was coming and the net amounted to ten. Jordan Berry has done well to pin teams. Either let him do it or just go for it. Tomlin somehow chose wrong.