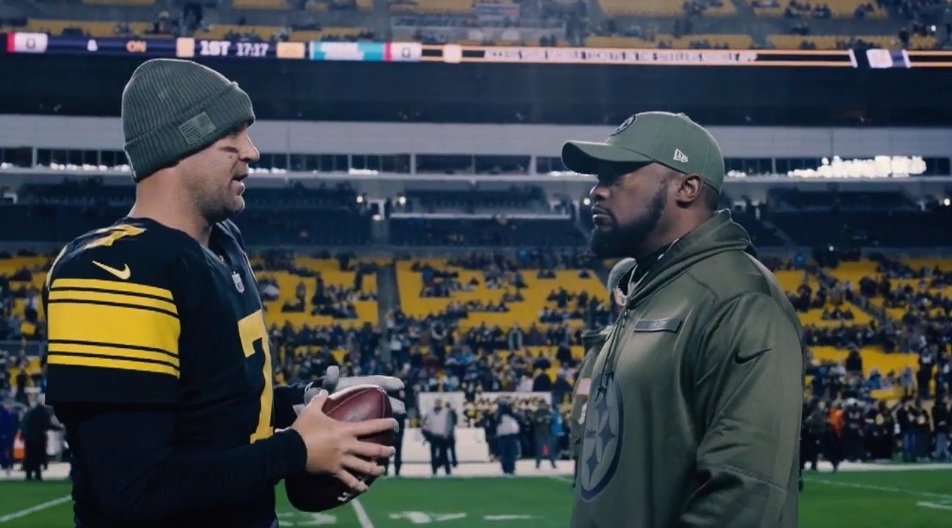 Now THAT was the performance Pittsburgh Steelers fans have been waiting for with this group for the last two years.

The Steelers dominated in all phases of the game on Thursday Night Football, rolling to an impressive 52-21 over the visiting Carolina Panthers at Heinz Field, pushing the Steelers into the upper echelon of the AFC contenders.

While the offense put up 45 of the 52 points, the Steelers’ defense had a strong performance on Thursday night, outside of the first drive of the game for the Panthers. Along with a pick-6, the Steelers recorded five sacks of Cam Newton and held Carolina’s high-powered offense to under 300 total yards, showing up in a big way on primetime.

Now that the dust has settled, it’s time to hand out some grades for Thursday’s performance by the Steelers.

You can’t turn in a better performance as a quarterback than Ben Roethlisberger turned in against the Panthers, going 22-for-25 for 328 yards and five touchdowns, finishing with a perfect passer rating on the night.

Right away, Roethlisberger was red hot, hitting JuJu Smith-Schuster for a 75-yard touchdown on the Steelers’ first play from scrimmage, before then hitting Antonio Brown on a 53-yard bomb down the right sideline. Roethlisberger added touchdown passes to Vance McDonald, Jesse James, and Jaylen Samuels on a night that he was incredible.

The veteran did everything, hitting the deep shots, taking what the Panthers gave them, and also carved up the Panthers in the middle of the field, making for a near-perfect performance at home.

Roethlisberger also made things happen with his legs, rushing for 27 yards on three carries, including a season-long 18-yard run that saw safety Eric Reid get ejected for a shot to the head of a sliding Roethlisberger.

James Conner got off to a fast start but later departed the game to be evaluated for a concussion. Coming off of a 30-touch game four days ago against the Baltimore Ravens, it really wasn’t a surprise that Conner had a reduced workload, sitting out two straight drives in the second quarter to get Stevan Ridley and Samuels received a ton of work in primetime.

When on the field, Conner ran hard and made a number of defenders miss, finishing with 65 yards on 13 carries, adding a touchdown in the win. As a receiver, Conner caught just one ball for eight yards, but he wasn’t really needed on a night in which Roethlisberger was so dominant.

Samuels came on in relief and played well in extensive action. Although he had just five carries for seven yards, he added three catches for 22 yards and his first career touchdown, showing flashes of what he can do as a change-of-pace back in this league.

Ridley played really well too, finishing with 26 rushing yards on eight carries, helping the Steelers milk the clock in the second half in the big win.

At fullback, Roosevelt Nix had a big night, hauling in two passes for 17 yards, coming downhill hard against defensive backs after making the two short catches. As a blocker, he helped open up big lanes for Conner, Samuels and Ridley on the night before making his biggest impact on special teams in the second half.

Much like Roethlisberger’s big night, it’s hard to be better than what the Steelers receivers were on Thursday night.

Smith-Schuster had a 75-yard house call on Pittsburgh’s first play from scrimmage, dusting James Bradberry on the slot fade before finishing with three catches for 90 yards and that opening score.

Brown went off as well, finishing with six catches for 96 yards and one touchdown, coming on a 53-yard bomb from Roethlisberger past rookie corner Donte Jackson, breaking the game wide open.

I really liked what I saw from Smith-Schuster and Brown, in terms of working open against a strong secondary, but the guy that had an impressive night was Ryan Switzer.

Yes, he finished with two catches for 31 yards, which isn’t eye-popping, but both catches went for first downs. Four of Switzer’s last five catches have gone for first downs. I love that from the diminutive slot receiver.

Darrius Heyward-Bey even got in on the action, hauling in one pass for nine yards from Roethlisberger in the win. It was a simple dump off with Roethlisberger stepping up in the pocket, but it was nice to see DHB catch his first pass of the season in a thorough beatdown by the black and gold.

Vance McDonald continues to be a vital piece to Pittsburgh’s offense. The big brute of a tight end finished with four catches for 44 yards and a score, coming down with a 12-yard touchdown in the back of the end zone that was highlight-reel worthy. He also ran threw a number of tacklers once again, punishing everyone in his way.

Jesse James had just one catch for eight yards, but it was a touchdown that really busted the game wide open. He also had a key block on Conner’s rushing touchdown. He was really solid as a blocker all game long.

Seriously, this offensive line is playing some great football these last five weeks.

Once again, the big men up front kept Roethlisberger clean, allowing just one sack and two quarterback hits, while also helping the Steelers rush for 138 yards on 30 carries (4.6 yards per carry).

On the ground, DeCastro and Ramon Foster continue to be a problem for defenses when they get out in front on power runs. Nobody wants to take them on when they’re moving. The same goes for Pouncey, who picked on defensive backs early in the game when the Steelers got Conner going on the ground.

Cam Heyward had a field day against the left side of Carolina’s line, as well as against Christian McCaffrey in pass protection, leading the Steelers with two sacks on the night. He was nearly unblockable at times, which looked like the Heyward of last season when he played at an All-Pro level.

But Javon Hargrave may have had the best game of the night for the Steelers’ defensive line, finishing with a group-high six tackles, proving to be a force against the run throughout the game.

Stephon Tuitt also played well, providing a ton of pressure on Cam Newton throughout the night. Although he didn’t get home for a sack, Tuitt finished with two tackles, one tackle for loss and one quarterback hit in the win.

LT Walton and Tyson Alualu also played well in limited snaps in the second half, allowing Heyward and Tuitt to get a break with the game in hand.

Early on though, this group struggled against the run, especially the read-option with Newton and McCaffrey. They seemed to get that fixed as the game progressed, which helped the Steelers get stops and pull away offensively.

That first touchdown drive by the Panthers was ugly for Pittsburgh’s linebackers as McCaffrey gashed the Steelers on the ground and through the air.

But after that, the linebackers settled in and played well on the night. Vince Williams struggled early in coverage against McCaffrey, but he got his revenge with a pick-6 to put the Steelers up 14-7 early in the first quarter, while Jon Bostic was a hammer defensively, leading the team with 10 stops on the night.

Williams also added a sack by running over McCaffrey, who had a rough night in pass protection.

LJ Fort played really well in sub package, recording three stops. He was sound in coverage down the middle of the field too. There’s a good chance Fort starts to see the field more and more as the season progresses. He’s playing really well.

At outside linebacker, Bud Dupree continues to be a problem coming off the edge, while TJ Watt was really disruptive on the night. His pressure on Newton in the end zone led to Williams’ pick-6.

Dupree missed a sack on Newton, but he consistently got great jumps off the ball and was in the backfield a ton on the night, finishing with two tackles, one sack and two tackles for loss, hitting Newton once.

Watt added just one tackle, but had a sack and two quarterback hits, helping the Steelers rattle Newton on the night.

This was a much better performance overall by the Steelers’ secondary, considering there was just one penalty called on the Steelers all night, and it was on Artie Burns, who came off the bench in garbage time.

Coty Sensabaugh was arguably Pittsburgh’s best defensive back on the night, leading the group with five tackles, breaking up one pass on the night while playing tight coverage against DJ Moore and Curtis Samuel.

Joe Haden played a strong game as well, finishing with three tackles while taking Devin Funchess out of the game early. I’m not sure how much he trailed Funchess throughout the game, but when Haden was on the big receiver, he was taken out of the game.

You didn’t hear much from Mike Hilton this week, but one play that stood out to me was when he blew up Jarius Wright’s block on a swing pass to Samuel in the flat, forcing Samuel to stop behind the line of scrimmage, which allowed his fellow defenders to come and Samuel up for a loss behind the line.

In the back half, I was pleased with Morgan Burnett, Sean Davis, and Terrell Edmunds. All three recorded four tackles each and really seemed to keep everything in front of them while tackling well in the open field.

I’m not sure how was responsible for McCaffrey on his second touchdown catch of the night, but early indications are it was Burnett who got caught up inside. Fortunately, that touchdown didn’t really hurt the Steelers, but it’s something that needs cleaned up.

Chris Boswell showed off his big leg in primetime, drilling a 50-yard field goal while going 7-for-7 on extra points one week after missing one in Baltimore. As Mike Tomlin said earlier in the week, there’s nothing to be worried about with Boswell. He was going through a funk, and maybe Thursday’s showing was him working completely out of said funk.

Jordan Berry had an atrocious 27-yard punt late in the game on his first punt of the game. That can’t happen, even if the game was well in hand and field position didn’t matter. Sure, he was coming off the bench cold in the fourth quarter, but that was a dreadful punt. Fortunately, he followed up with a 52-yarder on his second punt, pinning the Panthers deep.

Nix forced a big fumble on Samuel’s kick return in the second half, setting up another Steelers touchdown after Anthony Chickillo recovered the fumble. The Steelers forced a big turnover on special teams, which is a great sign moving forward, even if special teams turnovers aren’t really sustainable.