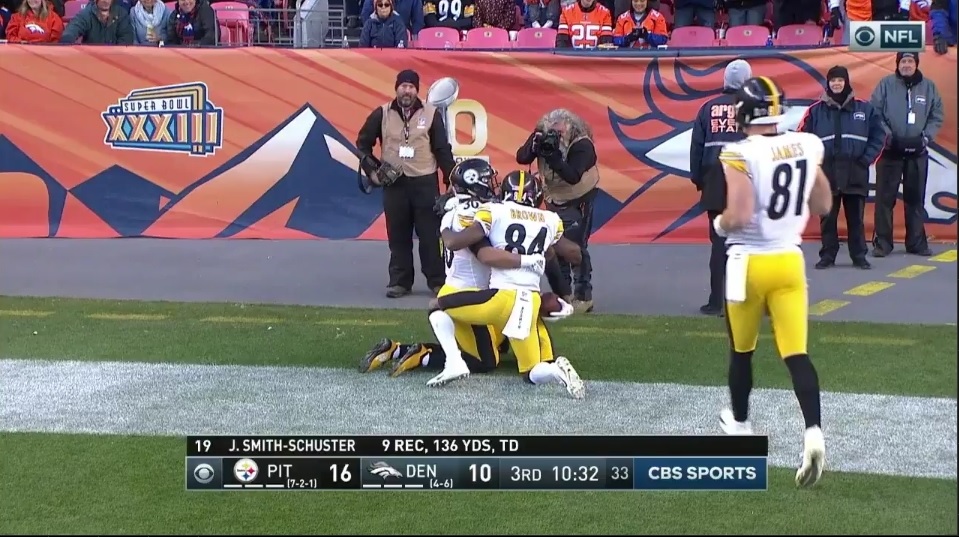 The House of Horrors cropped up again at Mile High Stadium in Denver as the Pittsburgh Steelers shot themselves in the foot time and time again, falling to the Denver Broncos 24-17 in frustrating, heartbreaking fashion.

On a day in which Ben Roethlisberger was largely spectacular, and JuJu Smith-Schuster was uncoverable, the Steelers wasted some strong performances thanks to special teams errors, two major fumbles deep in Denver territory, and an interception in the end zone by a defensive tackle. That play alone pretty much summed up the Steelers’ rough day on the road.

Let’s take a look at some grades.

Aside from the game-ending interception thrown by Roethlisberger to defensive tackle Shelby Harris in the end zone, the veteran gunslinger was mostly spectacular on Sunday evening, throwing for 462 yards on 41-of-56 passing, adding a 97-yard touchdown to Smith-Schuster that gave the Steelers a 17-10 lead early in the third quarter.

After that though, the Steelers couldn’t finish drives despite Roethlisberger carving up the Broncos, averaging 8.3 yards per completion on the evening.

Roethlisberger took what the Broncos gave him early on, which opened up the secondary for bigger splash plays. The veteran took a number of deep shots on the afternoon, connecting on just one, with one other one by James Washington going as a huge drop.

Overall, Roethlisberger showed off some impressive accuracy on the evening and really spread the ball around to his playmakers. It’s tough to waste a performance like this from Roethlisberger, especially on the road, but the good news is Roethlisberger bounced back from a tough week last week to have a monster game on the road in Denver.

James Conner and key fumbles on the road late are starting to be a problem for the Steelers. Prior to the fumble deep in Denver territory at the tail end of a great screen play by the Steelers, Conner was having a great game, sitting around 100 total yards on just 16 touches.

After the fumble though, Conner touched the ball just one more time – a run on 2nd and Goal in the red zone that went for 1 yard. The Steelers seemed to lose some confidence in Conner for the second straight week down the stretch, which could be a sign of trouble.

I still believe in Conner though. The Steelers should have turned to the ground game a bit more, considering Conner averaged 4.1 yards per carry on the afternoon (13 carries, 53 yards). As a receiver, Conner added four catches for 42 yards, including the long 23-yard catch-and-run on the screen before the fumble.

That fumble looms large though. It’s hard to move past that turnover in this one.

Smith-Schuster absolutely feasted on the Broncos’ secondary as Denver double-teamed Antonio Brown. Smith-Schuster finished with a career-high 13 catches for 189 yard and a touchdown, which came on a highlight-reel 97-yard catch-and-run that saw Brown throw a monstrous block on Chris Harris Jr. down the field to spring Smith-Schuster.

The Broncos really didn’t have an answer for Smith-Schuster on the evening, evening trying CHJ on him late in the game. As for Brown, the star receiver finished with nine receptions for 67 yards in the loss, mostly working underneath, seeing 12 targets overall.

Washington had a rough, rough game. The rookie dropped a sure touchdown on a deep shot in which he laid out for it, rather than staying in stride. He saw three targets on the evening, but none after the drop. Maybe it’s time to sit him down again.

That dropped had as big an impact on the game as Conner’s fumble.

Against a tough Denver front seven, the Steelers ran the ball well when given the opportunity, averaging 4.7 yards per carry. That being said, they ran it just 15 times, two of which were Roethlisberger scrambles. That’s a bit frustrating from a balance perspective.

With Roethlisberger throwing the ball 56 times, the Steelers’ OL allowed just two sacks and six quarterback hits in the loss, meaning Roethlisberger was touched on just 10 percent of his drop backs.

Chukwuma Okorafor had a strong game against Von Miller, holding him to just one sack, which came on a play in which he appeared well offsides. Chuks did receive some help throughout the game on chips from tight ends and running backs, but overall he showed lite feet at right tackle, keeping up with Miller.

The rest of the offensive line was strong. The one bad play was really Maurkice Pouncey getting steamrolled by Shelby Harris into the lap of Roethlisberger. Fortunately for Pouncey and the Steelers, Roethlisberger found Smith-Schuster in stride for the 97-yard score.

The true highlight from this game for the offensive line came on Alejandro Villanueva’s touchdown catch at the end of the first half on a fake field goal pass from Chris Boswell, knotting the game up at 10-10 at the half. Villanueva was a wide receiver at Army and showed off his sweet hands and zone awareness on the play.

The Steelers’ defensive line really, really struggled against the run throughout the game Sunday afternoon in Denver. Javon Hargrave and Cam Heyward were really good rushing the passer, but against the run the duo couldn’t get off blocks consistently to slow down Phillip Lindsay, who rushed for 7.9 yards per carry, becoming the first 100-yard rusher against the Steelers on the season.

LT Walton shouldn’t dress for another game this season. He is soft against the run, gets swallowed up by blocks, and really doesn’t seem to have a feel on how to play the run.

Tyson Alualu came back to earth at Denver, finishing with just two run stops after dominating the Jaguars the previous week. He wasn’t able to flow to the football as well on Sunday, and didn’t get off blocks quickly enough.

This group was so slow coming downhill against the run, and didn’t flow well throughout the game on Sunday, leading to some big runs for the Broncos.

Jon Bostic didn’t scrape fast enough on Lindsay’s 32-yard run down the right sideline, and was lost in coverage at times against Emmanuel Sanders, Matt LaCosse, and Jeff Heuerman.

Vince Williams was negated as a blitzer against the run, but he did get home for a sack in the loss. He was slow to flow at times as well, but a ton of credit needs to be given to Lindsay and his elite level speed. He toasted the Steelers a number of times on Sunday.

LJ Fort wasn’t very good on Sunday either. He’s starting to get exposed through the air as he puts more tape out there. Maybe it’s time to give Matthew Thomas a shot again.

Outside, Bud Dupree was mostly non-existent on Sunday, while TJ Watt didn’t have much of an impact after coming back from a wrist injury scare. Anthony Chickillo just isn’t it, man. He’s poor against the run, and offers very little as a pass rusher. Ola Adeniyi can’t get healthy soon enough.

Joe Haden might want to throw the film away from this game. Sanders smoked him at least twice, running past the veteran cornerback on both occasions. Haden was fine in coverage away from Sanders, but the Broncos went right at Haden when matched up with Sanders. That’s something to keep an eye on moving forward as Haden will seen Keenan Allen, Michael Thomas, Josh Gordon, and likely AJ Green in four of the next five weeks.

Mike Hilton was mostly non-existent too in the slot, taking away a playmaker for the Steelers’ defense. Coty Sensabaugh was poor against the run but wasn’t heard from against the pass. Sometimes that’s a good thing for a corner through the air.

Morgan Burnett was strong in this one, breaking up a pass intended for Heuerman, finishing with two stops in limited action. The real issues at safety were Sean Davis and Terrell Edmunds once again.

Davis took another horrendous angle on Lindsay’s 32-yard run, leading to the undrafted rookie back blowing right by him. He was slow to rotate over on deep shots as well, since he was playing the single-high role.

Edmunds has zero awareness in the passing game, which leads to some guys getting wide open against him. Sanders’ touchdown catch wasn’t on him though, like some wanted to make you believe as soon as it happened. He just needs to have the wherewithal to break off his coverage to make a play on the ball.

It won’t get any easier next week.

Aside from the fake field goal touchdown from Boswell to Villanueva, this wasn’t a good performance on special teams.

Boswell had a field goal blocked by Justin Simmons coming right up the middle, while Jordan Berry had another short punt in this game that failed to pin the Broncos deep. He did finished with 44.3 yards per punt on three punts with a long of 52, pinning two punts inside the 20 yard line, but the third punt simply wasn’t good enough. He’s good for one inconsistent punt a game at this point.

Switzer had a muffed punt that the Steelers were lucky to get back, and also fumbled one out of bounds and nearly lost another in the second half.