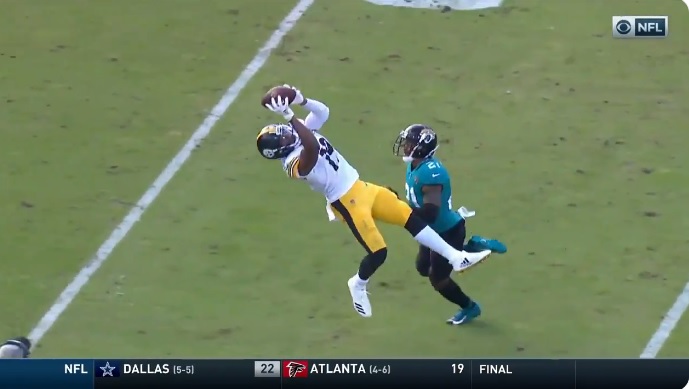 The Jacksonville Jaguars employed a similar script to their two victories over the Pittsburgh Steelers last season. Play tough shutdown defense, establish the run and put quarterback Blake Bortles in easy and manageable situations to win. Except, unlike the last two meetings, the Steelers’ had just enough left in the tank to squeak out a 20-16 victory over the Jaguars, with their last second touchdown.

In a story of two halves, it was a Ben Roethlisberger one-yard plunge touchdown with seconds remaining that gave the Steelers a walk off victory. The final plays saw a James Conner drop, a cancelled interception but finally a last-second touchdown prevailed.

Bortles threw for just 104 yards, was sacked six times and did not throw a touchdown pass but once again his run game and defense tried their hardest to carry him to victory. Without Stephon Tuitt, the defensive line was manhandled, allowing 177 yards rushing.

The Jaguars went into halftime up 9-0 but the score did not do it justice as the Jacksonville team dominated the Steelers on all sides of the ball. The Jaguars had 10 first downs to the Steelers’ four, in fact, the Steelers did not get their first non-penalty first down until 2:37 left in the second quarter. Over twenty minutes of time of possession for the Jaguars, and two costly interceptions from Roethlisberger left the Steelers lucky to be down just 9-0 at the break.

Though they were down, the Steelers looked poised to get on the board entering the second half but a reversal of fortune saw the Jaguars pile on to their lead instead. The Jaguars’ first touchdown came as the Steelers were on the heels of their own touchdown. On the 11-yard line, Roethlisberger misfired a pass towards Antonio Brown, that was intercepted by cornerback Jalen Ramsey, this would be Ramsey’s second interception off the Steelers’ quarterback.

Bortles would then lead his team 80-yards down the field and a Fournette plunge gave the Jaguars their first touchdown of the game. Fournette leaped over the top just like he did in last year’s playoff game, giving the Florida team a 16-0 lead.

There did seem to be light at the end of the tunnel for Roethlisberger as immediately after the Jaguars’ score, he found Brown on a 78-yard touchdown pass. A scramble drill, the veteran quarterback heaved a pass down the field that found the good graces of Brown as the receiver raced into the endzone. Unfortunately, an unsuccessful two-point conversion still made it a two-possession game. Brown would finish with five catches for 117 yards.

A desperation touchdown pass from Roethlisberger to Vance McDonald made it a 16-13 ballgame with just over two minutes left, giving the Steelers a last chance at victory.

After recording a perfect passer rating last week, Roethlisberger’s performance today against the Jaguars was as bad as they come. The quarterback threw three interceptions, two to Ramsey and one to safety Barry Church. In his last two regular season games against Jacksonville, Roethlisberger has now thrown eight interceptions. But though Big Ben had been bad for majority of the game, he came through with a big moment when it mattered most, with the game on the line, scoring a walk off touchdown with just three seconds remaining. A 65.4 passer rating and three brutal interceptions get forgotten very easily when Roethlisberger racks up a victory instead. His ability to weather the storm and power the Steelers to victory is not a stat that shows up on the box score, but it is one that shows up in the win column.

It was not easy, it was not pretty but a win is a win.

The Steelers’ road trip continues next weekend as the team heads to Denver to take on the Broncos. Kick off is scheduled for 4:25 p.m. EST.