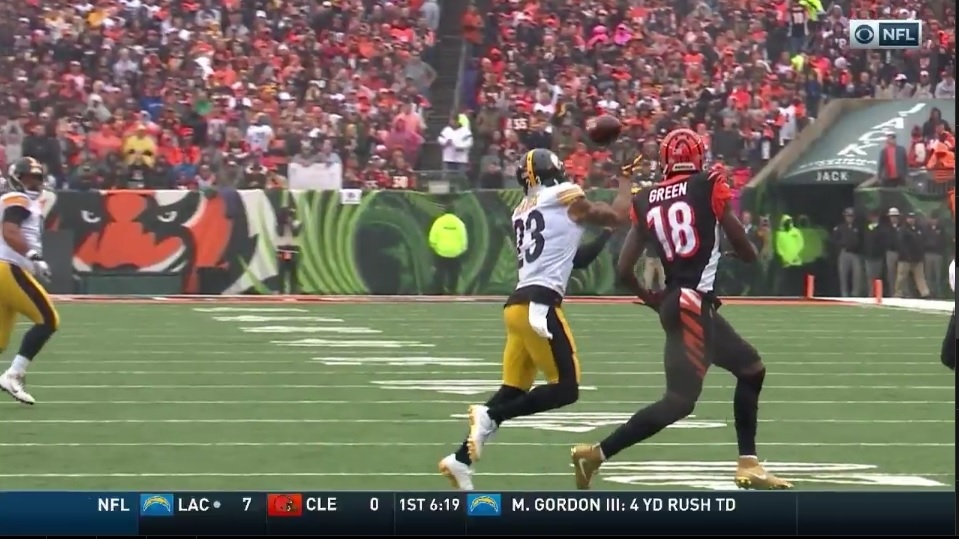 Normally if a team runs you to the ground for 179 yards, dominates possession for a whopping time of 37:40 and coaxes three interceptions out of your quarterback, your chances of winning are somewhere between diddly and squat.

However; this is no normal team in the 2018 version of the Pittsburgh Steelers and their still unbelievable last second victory over the Jacksonville Jaguars may just end up being the single most pivotal point of the year for the Black and Gold.

For more than three quarters of the game, Steelers Nation could be heard demanding retirement papers from Ben Roethlisberger and resignation letters from the entire coaching staff.

It was that ugly.

And then it was that beautiful.

Finally, like butter being slowly churned the Steelers offense turned the Beast into a Beauty thanks to clock winding down, broken play where Big Ben barely broke through to the goal line.

Take a deep breath. We’re going to need it as where we’re heading the air is thin.

Time to Spin it. We’re on to Denver

At the end of the remarkable and dramatic victory, through the flurry of high fives, twirling towels, beaming smiles, and confetti flying (or was that in my head?), a friend turned and said, “That was even better than last week”, in reference to the Steelers total obliteration of the Carolina Panthers by a score of 52-21.

I paused for a moment, then said with venom, “No, it wasn’t.”

I mean, after all, a phenomenal Steelers game is where we win 63-0, our kicker strains a hamstring from nailing so many extra points and JuJu Smith-Schuster is so bored of touchdowns that he actually just hands the ball to the ref after scoring.

But, I realize, some of you Adrenalin junkies prefer a game like the monstrosity we just witnessed.

To each his own. Tastes great. Less filling.

Who Would Have Thunk?

I’m guessing it wouldn’t surprise you to know that your Pittsburgh Steelers boast the number five overall offense with an average of 410.2 yards gained per game.

But, were you aware they come into this game against the Broncos ranked as the number six defense giving up 326.8 yards a game?

Mainly, because we’ve watched so many games where they have been bowled over like pins and rained upon through the air like a hailstorm of footballs.

Yet, apparently, so have the rest of the defenses in the league as the National Football League has stacked the deck so heavily against defenders. In today’s league, every tackle is a 15 yard penalty, and even sneezing in the presence of a quarterback will result in a flying yellow hankie.

The Baltimore Ravens are ranked as the number one defense this year with a 300 yards per game average. To put this in perspective, their 2000 history-making and Super Bowl winning defense ended their season by giving up an average per game of 50 yards less.

And they were only second in the league that year in fewest yards per game allowed.

In criticizing the Steelers defense, many fans point to the Steelers having a soft schedule against opposing offenses with the worst yet to come.

Yet, in truth, the Pittsburgh defense has already squared up against top offenses in the number one ranked Tampa Bay Buccaneers, the number three Kansas City Chiefs and the number seven Atlanta Falcons.

Maybe our issue as fans is comparing them against the great Steelers defense of the past when the rules allowed teams to…well, play football. Perhaps today’s defenses need to be graded on a curve.

They are much better than you think and seem to be on the rise every week.

Javon Hargrave virtually single handedly turned the game around against the Jaguars on defense. It was arguably his best game as a professional, even though it started out slowly.

A Steelers nose tackle with five sacks this early in the season is an amazing accomplishment. And, it’s also time to credit Hargrave for being equally stout against the run as well.

He is becoming perhaps the brightest star on the defensive line.

And, also flashing with brilliance is the young T.J. Watt. Should we not be constructing a pedestal for him to stand among the great Steelers edge linebackers like Greg Lloyd, Joey Porter, Jason Gildon, Chad Brown and James Harrison?

Because, the truth is he’s already surpassed them all by getting more sacks in this stage of his career than any of them during that same time period.

If he has a shortcoming in fitting in with those Steelers legends, it’s probably that he’s too nice of a guy. But, don’t doubt his ability as a player.

In truth, the Steelers are a few stars short of having the defensive galaxy that all of Steelers Nation is yearning for, but the stars are certainly beginning to align.

What’s missing with this defense? It’s that they keep missing. Easy interceptions, that is.

The Chicago Bears lead the league with 20 interceptions. The Steelers? Well…they only have six.

It’s not that they couldn’t have 20, it’s that they need to catch the ball when the opportunity presents itself.

Until this Steelers defense rids itself of “Ike Taylor” Syndrome, it will fail to rise to the level of the elite squads in the league.

Hopefully, Butler has them hitting the Jugs machine.

Most of the Steelers team has some splainin’ to do after their subpar performance against Jacksonville. Among those is the highly vaunted offensive line that for the most part failed miserably at getting push and opening holes against the Jaguars front seven.

Now, this same O-line heads to Denver to face Von Miller and friends without starting right tackle Marcus Gilbert and probably without his backup in Matt Feiler.

The “next man up” philosophy will be put to test again, as it’s usually not a great strategy to have your third man up when facing Miller.

One of the most consistent criticisms of Ben Roethlisberger is he gets himself in trouble whenever he tries to force the ball into Antonio Brown.

Yet, the Jaguars game was Exhibit “A” of what it looks like when the Steelers don’t make certain they get the ball into Brown’s hands, at whatever the cost.

The Steelers passing offense simply doesn’t function if you shut down Brown. Especially, if in the case of Jalen Ramsey in the first half of the game, you’re able to do it with one shutdown cornerback.

You can’t take the best receiver in the game, and maybe of all time for the Steelers, out of the offense and expect that the offensive game plan will execute properly.

Smith-Schuster, for all of his marvelous traits, is not a separation guy. He needs a well-oiled offensive system in order to get open.

Certainly the same is true for James Washington who has struggled to get separation at all.

Vance McDonald. James Conner. Jesse James. All of these guys need open spaces in order to perform their magic.

In reality, the entire offense centers around Brown. No. You don’t want to force a bad pass into triple coverage. But you can’t wait until the second half of the game to get the ball into Antonio’s hands either.

Making sure Brown gets his touches early has got to be job one for the Steelers offense moving forward.

I think it’s appropriate to say the Jaguars game was the worst of young James Conner’s career as a starter.

From an inability to gain yards on the ground to win-threatening shameful drops, this week was no doubt one of restless nights staring at the ceiling for the emerging sensation.

You’ve thought you’ve seen Conner run hard before? That was nothing.

He’ll run through brick walls against the Broncos. There will be nothing better to get over his hangover.

I’d suggest giving him the ball early and often.

This game against the Broncos is as much about the Jaguars game as it is about the one being played this week in Denver.

Did the Jaguars show off some glaring weaknesses of the Steelers to the rest of the league? Ones that will be exposed from here on out? After all, the Jaguars dominated Pittsburgh three quarters of the game. It was actually embarrassing.

Or, did the fourth quarter comeback reveal the true character of what is emerging to be another Super Bowl winning Steelers team?

Are you wondering exactly who the Steelers are this year? Then don’t miss this game.

The answer will be revealed emphatically Sunday. About one mile up.