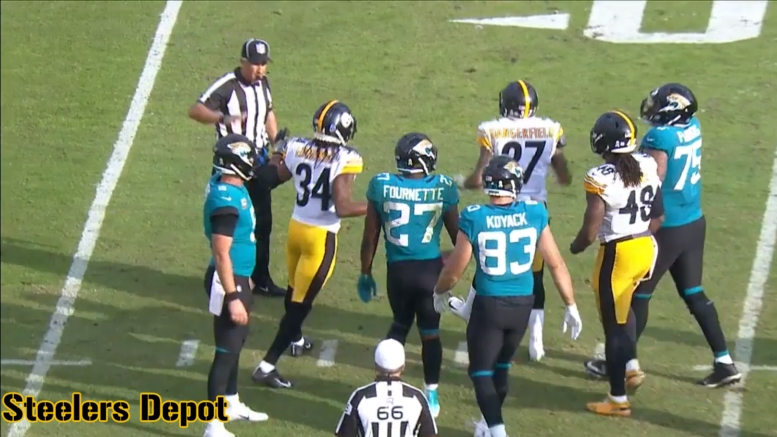 One of the curiosities of Sunday’s game against the Jacksonville Jaguars was the revealing of yet another defensive sub-package by the Pittsburgh Steelers. This time, they introduced a package that currently lacks a name within their defense I will temporarily be referring to as Stranger Danger, just because.

If you were wondering why Jordan Dangerfield was out there on the field for 10 plays, it wasn’t because anybody was hurt. As a matter of fact, it was a three-safety look that otherwise came out of their ‘base’ 3-4 defense.

So who did the extra safety replace? A cornerback. On Dangerfield’s 10 snaps in the game, Coty Sensabaugh sat and watched from the sidelines as a three-man defensive front line and four linebackers saw the field.

Head Coach Mike Tomlin hardly even addressed the subject after the game. He was asked what kind of defensive adjustments he made on defense in the second half, and after he said that they made none, a follow-up question brought up the Stranger Danger package.

Ignoring the fact that they already used that look in the first half for a couple of snaps, it’s obviously not something that they would just do on the fly. They have been running this in practice, of course; they didn’t just decide to see what happens if they swap out Sensabaugh for Dangerfield to see what happens.

Said Tomlin, “that wasn’t an adjustment”, referring to the package in question. “We played [Dangerfield] at corner when [the Jaguars] had only one wideout in the game. We were making the same calls” in the second half as in the first half.

According to our charting, all 10 of Dangerfield’s snaps did indeed come against run-heavy packages. Nine were run out of a 22 look with a fullback, and one featured three tight ends. It makes sense that if you are only facing one wide receiver in the game, you can get by with only one cornerback. Especially when you only have one cornerback you’re comfortable with on the boundary.

It was disappointing that nobody followed up about this package, but perhaps somebody will today during Tomlin’s pre-game press conference. I’m not getting my hopes up for that, but I would like to know if this is something they plan to continue using, like the new dime look featuring L.J. Fort as the line inside linebacker.