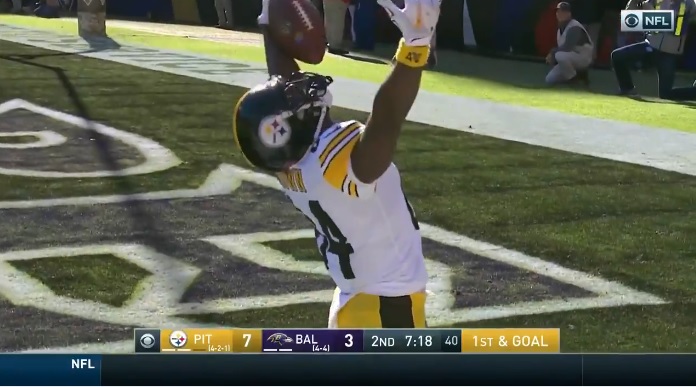 Ben Roethlisberger and the Pittsburgh Steelers marched into Baltimore and took the flight out of the Ravens, defeating them 23-16. On the arms and legs of Roethlisberger, the Steelers won their fourth game in a row and avenged their early season loss to the Ravens.

Roethlisberger’s broken left index finger did not seem to hamper the quarterback much as he was able to break the will of the Ravens’ defense. The Steelers’ quarterback completed 28/47 passes for 270 yards along with three combined touchdowns. His first came to James Conner and his second, a screen pass to Antonio Brown, who dodged two Ravens defenders and walked into the endzone.

Brown’s touchdown gave him six consecutive games in which he has recorded a touchdown, just two games short of the NFL record. The veteran receiver otherwise enjoyed a quiet afternoon in which he recorded five receptions for 42 yards. JuJu Smith-Schuster ended up the team’s leading receiver with 78 receiving yards.

As for Conner, the running back went over 100-yards rushing for the fourth consecutive game, averaging over five yards per carry. Both his and Brown’s touchdowns helped give the Steelers an early 14-3 lead.

Roethlisberger decided to do it himself on his third touchdown, sneaking in the football just over the goal line, giving the Steelers a 20-6 lead and silencing any suspicion over his finger injury. But while his broken left index finger may have been his biggest injury concern coming into the game, the Steelers were presented a big scare when Roethlisberger was tackled from behind by Ravens pass rusher Matthew Judon. Big Ben seemed like Broken Ben as he laid on the ground motionless, though he only missed one play. That one play was a critical play and into the game came backup quarterback Josh Dobbs’ quarter. On his only pass, Dobbs hit Smith-Schuster on a 22-yard pass to convert a critical 2nd and 20. This would be a game changing pick up as the Steelers were able to drive down and add a crucial field to make it 23-13 with just under ten minutes remaining.

The Ravens offense did not threaten the Steelers as much as in their first meeting but Joe Flacco’s unit did respond incredibly well to the Steelers’ offense. Flacco matched the Steelers’ 75-yard scoring drive in the third quarter with a 75-yard drive of his own, ending with an Alex Collins one-yard touchdown run. That would be the Ravens only touchdown of the day as the Steelers’ defense held the Ravens to just three more field goals, negating them in the red zone on three of four occasions. Flacco also struggled, passing for just over 200 yards with no touchdowns and no interceptions.

The biggest difference came on time of possession and on third down. The Steelers controlled the ball for over 35 minutes, putting a choke hold on the Ravens’ ability to do anything with the football. And when the Ravens did have the football, they could not move the chains on third down, converting just 4/11 attempts, as compared to 10/16 for the Steelers.

The Steelers will now return home and prepare for a short week ahead. Mike Tomlin will have little time to prepare his team for the Carolina Panthers, who will be travelling to Pittsburgh to take on the Steelers on Thursday Night Football.