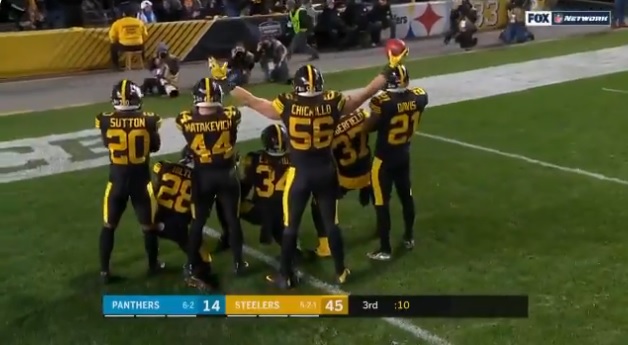 We’re back combing through our Pittsburgh Steelers’ defensive charting that we track each week. Been awhile since we’ve done this I know, and we missed the true halfway point of the year because last week was a short week. And honestly, I just didn’t have the time.

But now we’re back to look at all the data so let’s dive in.

This is out of 597 snaps, excluding all the “no play” events like false starts and offsides.

Despite the Steelers playing their base defense 65% of the time last week, it’s still lagging behind nickel and even dime, though the margin is pretty close.

For comparison, the Steelers were in base 38% of the time in 2017. They were in nickel 32.5% and dime just 22.7%. Some of that is situational, of course, so keep the numbers in context, but there’s a small shift in all areas.

– After mixing in their 3-4 “over” front for the last couple years, the nose tackle tilted in the weakside A gap and the weakside end shifted to the strongside three tech, they’ve run it just one time this year, Week 8 against Cleveland.

– Let’s see how much Keith Butler is blitzing. And wow. It. Is. A lot.

He’s blitzing 47.3% of the passing snaps through the first nine games. We know through the first four weeks, he was only (and it was still very high) at 42.9%. So from Week Five to now, he’s blitzed 50.9% of his chances. Craziness. Remember that his previous season high was just 39.7%, set in 2016. So we’re way above that and definitely a large enough sample size that he could easily end the year in the mid 40s.

Here are his game-by-game blitz rates since Week Five:

To add a little bit of tape to the numbers, there are end-of-game situations (like Cleveland/Atlanta) where Butler will blitz endlessly on a final drive, often repeatedly dialing up the same blitz play after play. That can skew the number a little bit but still, Butler is bringing some serious heat.

In terms of sending at least five rushers, he’s doing so 33% of the time for the entire season. That’s up from the 28% he was at through the first month.

His three man rush has been nearly nonexistent during the win streak too. Happened just five times. Did it 12 snaps the first month.

– Tyson Alualu took his first ever snaps as a true nose tackle last week, logging six of them versus Carolina. Those were with L.T. Walton on the field, the backup NT last year, who played RDE.

– On all runs with Javon Hargrave on the field, offenses are averaging just 3.4 YPC. But Daniel McCullers is posting an even better mark, just 2.9.

– Poor L.T. Walton. Just 24 snaps this year though he’s showing off his versatility, lining up in six different spots.

Snaps per pressure. Remember, lower the number, the better.

Everyone playing significant snaps have seen their pressure rates drop from last year, though Heyward and Hargrave have improved theirs since Week Four. Tuitt, even with three sacks, has actually slightly dipped (20.6 after the quarter point). So still some work to do.

Three pressures for Hargrave is really weird. All have resulted in sacks.

– Bud Dupree still playing more snaps on the left (opposite side) than T.J. Watt has on the right: 42 to 15. And either way, that flipping is happening very infrequently, despite Tomlin claiming it would occur more as the season went on. We’ll see if that changes the rest of the way.

– Anthony Chickillo has been the Swiss Army Knife. Lined up at seven different spots this year.

– Let’s look at some pressures from this group:

Numbers for the edge rushers have settled in after the first four weeks, the Browns’ game not skewing things as much anymore. Dupree’s pressure rate is slightly above 2017 (12.5) while Watt has come down a little bit (9.6). I’d still classify each as “good.” Chickillo has seen a bump and has more pressures already than he had all of last year.

Not a shock the ILBs look so good. They rush less, mostly in pass situations, and are schemed up to get pressure moreso than the OLBs.

Another radical change. Drop rates way down across the board but still mostly in-line with how the season started. Focus is on letting these guys rush in 2018, not move backwards. Last year, Watt dropped into coverage 37% of the time. Dupree was nearly at 25%.

– Finally, let’s move to the secondary. Ten different DBs have logged defensive snaps this year. The only two on the roster who haven’t are Brian Allen and Marcus Allen, the latter of which hasn’t been active for a single game.

– Let’s look at the numbers when each play is targeted.

Pretty much the same trend we examined before. Haden or Hilton? Awesome. Everyone else. Ehhhh.

– Hilton has a secondary high six pressures this year but this DB unit still searching for their first sack. A little disappointing and surprising for a defense that’s tied for the league lead in that category. Hilton has been blitzed 36 times.

– Burns has been penalized four times this season. Three of which were pass interference. The rest of the secondary – combined – has four of them.

Haden has been penalized just once this year, Week 8 against Cleveland. Even more reason to like him.