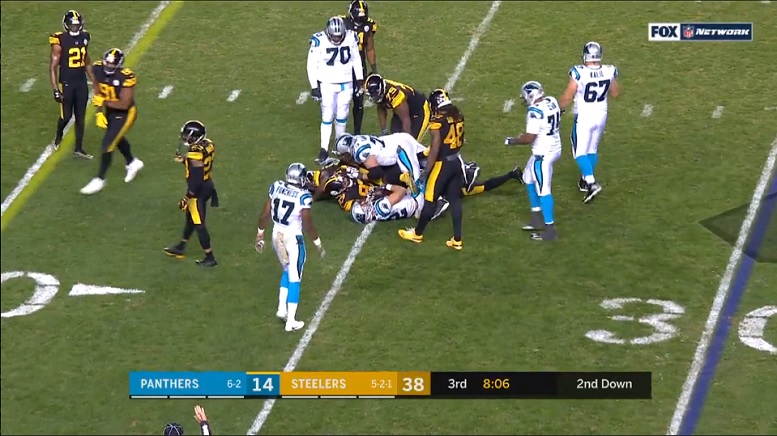 It’s sounding more and more like the Pittsburgh Steelers will have starting defensive end Stephon Tuitt back this coming weekend for their Sunday night home game against the Los Angeles Chargers.

Tuitt, who has missed the Steelers last two games with a hyper-extended right elbow that he suffered in the team’s Week 10 Thursday night game against the Carolina Panthers, said Tuesday night during his weekly show on DVE Radio that he’s ready to go and will play Sunday night against the Chargers, according to Gerry Dulac of the Pittsburgh Post-Gazette.

DE Stephon Tuitt said tonight on his radio show @DVERADIO he is ready to go and will play vs Chargers. In 2G without him, Steelers have allowed 303 rush yards, most since Weeks 1-2 (304) vs Cleveland-KC

In the two games that Tuitt has missed the Steelers defense has allowed 303 yards rushing. Backup defensive ends Tyson Alualu and L.T. Walton mostly replaced Tuitt on the field in the Steelers base defense in the last two games.

In the 9 games that he has already played in this season Tuitt has registered 32 total tackles and that includes 3 sacks. He also has one pass defensed to his credit.

Steelers head coach Mike Tomlin said during his Tuesday press conference that Tuitt and starting right tackle Marcus Gilbert could both return to practice this coming week in some capacity.

“Some other bumps and bruises, we anticipate a Stephon Tuitt working tomorrow at least in some capacity and letting that be our guide in terms of his march back and the same with [Marcus] Gilbert,” Tomlin said. “It’s good to kind of get some of those types of guys back.”

We’ll have to wait and see if Tuitt is indeed allowed to resume practicing on Wednesday and if he”s able to practice fully on Thursday and Friday. If he does, then he should indeed be able to play Sunday night against the Chargers.