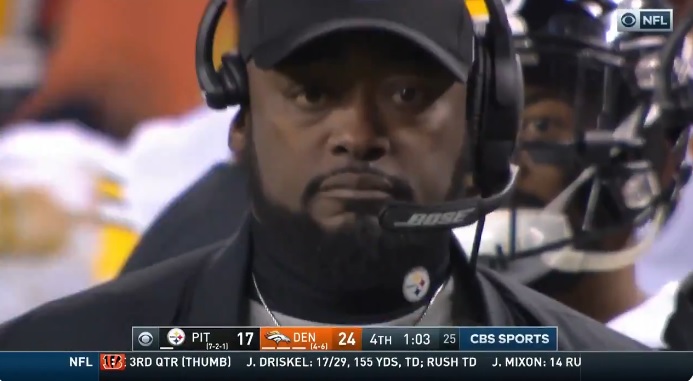 The Pittsburgh Steelers have seen their fair share of puzzling and shocking events in the Mile High City over the years. Today’s 24-17 loss over the Denver Broncos was no different.

In a first half where Ben Roethlisberger completed the most passes in Steelers’ history dating back to 1960, it was kicker Chris Boswell who threw the Steelers’ first touchdown. Lined up for a 19-yard chip shot before the half, the ball was directly snapped to Boswell who threw a perfect spiral to left tackle Alejandro Villanueva to tie the game at ten. But despite all the tricks, the Steelers were only able to fool themselves in the end.

Though there were signs of a breakout as Roethlisberger completed 25 passes in the first half, including a stretch where he completed 16 passes in a row. Still, the Steelers found themselves tied at ten a piece but not for much longer.

With over ten minutes left in the third quarter, Roethlisberger connected with JuJu Smith-Schuster on a 97-yard touchdown catch over the middle of the field as Smith-Schuster raced to the endzone. The second-year receiver would finish with 13 receptions for 189 yards and would give the Steelers a 17-10 lead. Roethlisberger would finish with over 460 yards passing but his two turnovers would come back to bite in the end.

This would also be the last lead the Steelers would hold.

With a lot of bullets in their arsenal, the Steelers continued to find ways to shoot themselves in the foot as turnovers and poor decision making plagued the team all afternoon. Four turnovers, dropped passes, a muffed punt and a blocked field goal came back to haunt Mike Tomlin’s team.

It began on the very first possession as the Steelers’ drove 47 yards in 10 plays and were in position for a Boswell field goal but the kick got no where near the uprights. Broncos’ defender Justin Simmons leaped over the line and blocked the Steelers’ field goal try. The Broncos would take advantage and march 39 yards down the field and add a field goal of their own.

The next Steelers’ drive ended with even more disappointment. Facing a third and one at the Broncos’ 24-yard line, Roethlisberger connected with tight end Xavier Grimble on a 23-yard pass. Grimble had only the end zone in sight but a big hit knocked the ball loose, rolling out of the end zone for a touchback and back into the Broncos’ hands.

With a 17-10 lead in the third quarter, Roethlisberger was intercepted while targeting Antonio Brown. Broncos’ quarterback Case Keenum would need only two plays to tie it up, finding former Steeler Emmanuel Sanders on gains of 38 and 5 yards, the later being a touchdown pass.

But just as Roethlisberger looked to rebound and lead his troops to another road victory, his soldiers continued to make it hard on him. The Pittsburgh team were able to survive a James Washington drop, that arguably should have been a touchdown and a Ryan Switzer muffed punt.

What costed the Steelers was a James Conner fumble deep in Denver territory. A screen pass and high tackle popped the ball out of Conner’s hands. Keenum then led a 11-play, 79 yard drive that finished with a Phillip Lindsay two yard touchdown plunge. Lindsay finished with 14 carries for 110 yards and a touchdown.

It is now back to back weeks that Conner has been on the bad end of a big play. While he was able to escape last week’s dropped pass with little to no consequences, he was not as lucky today as his points led to the Broncos’ game winning touchdown.

The Steelers were given one last chance to tie the game at the goal line but unlike last week, Roethlisberger’s heroics were turned into a nightmare. Another disorganized play saw Roethlisberger intercepted as he threw to Brown in the back of the end zone, a poor snap led to a lot of confusion on the play. The Steelers’ ability to battle back despite all their errors and have a chance to tie the game late is astonishing, but they just could not escape the kiss of defeat.

The Steelers’ six game win streak has come to an end and the team will have a chance to respond under prime-time lights, as the Los Angeles Chargers come to Heinz Field next Sunday night.