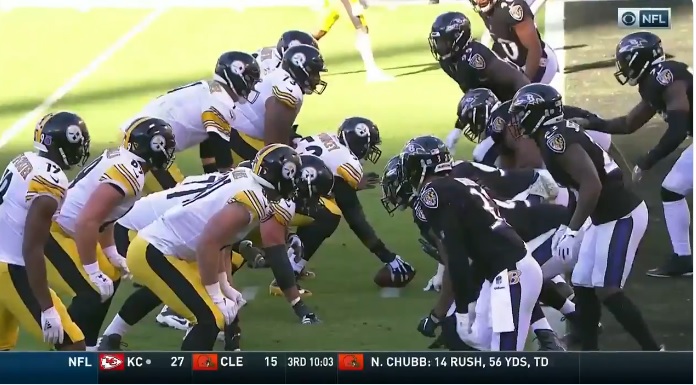 Time to get a little weird after a great victory, the Pittsburgh Steelers knocking off the Baltimore Ravens 23-16.

– Lets’s start with the score. Nothing seemingly interesting about a 23-16 outcome. But we know how hard it is for the Steelers to win on the road against Baltimore. From 2000 to 2016, the Steelers had just one road win by more than five points. It’s happened back to back seasons. 26-9 last year, 23-16 today.

– Antonio Brown has caught a TD pass in six straight games, the first Steelers’ player to do so since Ron Shanklin in 1973. That year, 1/3 of Shanklin’s catches went for touchdowns. Buddy Dial holds the record with 11 straight though that spanned two seasons.

– Josh Dobbs first NFL completion came on the road against the Baltimore Ravens, a gain of 22 yards.

Ben Roethlisberger’s first NFL completion came on the road against the Baltimore Ravens, a gain of 21 yards.

– Jesse James 51 yard catch was the longest of his career.

– Not my find but I have to share it. Roethlisberger the first player to punt, pass for a TD, and rush for one since John Elway in 1989. Against the Ravens.

Ben Roethlisberger has a Pass TD, a Rush TD and he's punted so far today for the Steelers.

The last player to do all 3 in a game was John Elway in 1989 (against the Steelers). pic.twitter.com/jkr0W5vq87

– Stephon Tuitt didn’t have a sack in his first five games. He now has one in three straight. He’s the first Steeler to do that over one season since James Harrison in 2016. And the first DL to do it since…Tuitt himself in 2015.

The last Steelers’ DL to have a sack in three straight who wasn’t Tuitt? Aaron Smith in 2004. Nope, Heyward hasn’t even done it before.

– Roethlisberger has rushed for two touchdowns in a season for the first time since 2010. He now has 18 in his career, tied for 16th place with Sidney Thornton.

– Pittsburgh has 74 penalties through eight games. That’s second most in franchise history, trailing only the 1977 season (78).