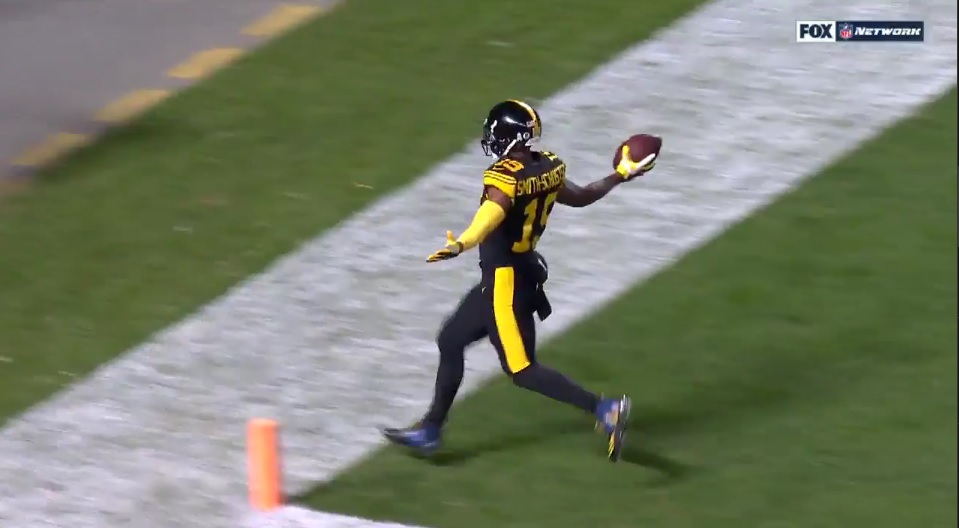 The Pittsburgh Steelers have not necessarily enjoyed home cooking so far this year. They have a much better record on the road than they do at Heinz Field. They were torched by the Kansas City Chiefs at home back in Week Two, and then the Baltimore Ravens handled them two weeks later in Pittsburgh. the Steelers brought just a 2-2 home record with them to Thursday night’s game.

So when the 6-2 Carolina Panthers seemingly effortlessly opened the game with a touchdown drive—their first touchdown on an opening possession of the season—and one that concluded with what looked like yet another blown coverage to boot on a 20-yard wheel route, I’m sure the groans were starting, as in ‘here we go again’.

Of course, the offense very quickly silenced that, as Ben Roethlisberger went on to find JuJu Smith-Schuster for a 75-yard touchdown on their very first play from scrimmage. It was Smith-Schuster’s second touchdown of 75-plus yards in his career, and the fourth reception of at least 67 yards. It was also the beginning of the end.

Said Panthers Head Coach Ron Rivera after the game in retrospect, “I thought everything was going fine until we gave up that 75-yard touchdown pass”. Yeah, everything was fine up until then, about five minutes into the game. Then less than a minute later, his team trailed by seven, as the defense would respond to their opening-drive failure with a pick six by Vince Williams, provided by the pressure of T.J. Watt.

“At the end of the day, we talk about staying in the lead position and we didn’t, unfortunately”, Rivera said of the loss. “They ran a double move, our guy bit up on the double move, and they throw the ball over the top for a touchdown. I can’t give you any other explanation than that”.

That was the start of the avalanche. Then Cam Newton “got trapped in the end zone and was just trying to get rid of the ball”. Talking about playing on the road, he added that the turnover was “probably the biggest thing. You talk about problems with these situations, we lose the turnover battle early in the first quarter”.

Lamenting the big plays given up, he reflected on how the defense had not been allowing them in recent weeks. They had been protecting the ball, and then suddenly weren’t. “You just can’t do that and expect to win a football game”.

That’s what happened to the Steelers in their first two home games, and they lost. The big-play touchdown to Christian McCaffrey to end the Panthers’ opening possession seemed like a sign of things to come. It would be—he added a 30-yard touchdown under similar circumstances—but it was far too little. Up until that 75-yard touchdown, though, things were looking good for Carolina. Right, Ron?