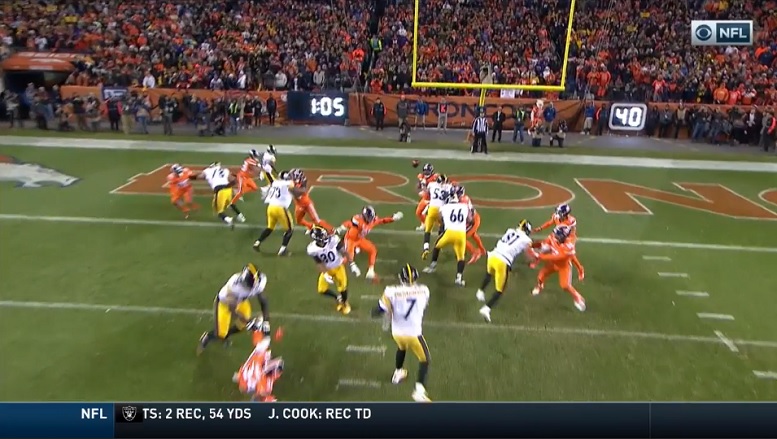 For all that went wrong for the Pittsburgh Steelers in their Week 12 Sunday road loss to the Denver Broncos the team’s offense still had a legitimate shot at tying the game up with less than two minutes remaining in the contest. That opportunity, however, ended in failure when quarterback Ben Roethlisberger had his 3rd and goal pass from the Broncos 2-yard-line intercepted by Denver defensive lineman Shelby Harris.

Here is the final INT if you're still watching the Twitter machine #Steelers pic.twitter.com/ZscXBmwvSw

Roethlisberger talked about that play immediately after the game was over when asked if a poorly handled wide left snap played a role in him throwing the interception.

“It was a run-pass option. Once you are late to the handoff, you don’t want to force the play,” Roethlisberger said. “Bad things can happen. I never would have thought in a million years that a defensive lineman would get blocked off the ball that far, right into an interception. Good play by him. ‘AB’ (Antonio Brown) was coming. I just never would have thought that guy would make that play.”

While wide receiver Antonio Brown was indeed “coming” across the middle of the end zone on that ill-fated play, so too was Broncos cornerback Bradley Roby and had Harris not intercepted Roethlisberger’s pass, he may have.

Harris, by the way, had an interesting description of what led to him intercepting Roethlisberger when he discussed the play right after the game.

“I actually did not do what I was supposed to do, but it ended up working out pretty well,” Harris said. “During the play, honestly, I did not know what he was trying to do. It was supposed to be a run and he decided to pull it and just throw it. Honestly, I saw it floating up there and [I] just caught it.”

Roethlisberger’s Sunday red zone interception against the Broncos was his fourth such one this season and he now owns the league-league in that dubious statistic. As our very own Matthew Marczi pointed out just last week after Roethlisberger threw his third red zone interception of the season against the Jacksonville Jaguars, the Steelers quarterback is now on the cusp of tying his career-high of five that he had during the 2006 regular season.

Dating back to his 2004 rookie season, Roethlisberger has now thrown 24 red zone interceptions during the regular season and only New York Giants quarterback Eli Manning (33) and New Orleans Saints quarterback Drew Brees (27) have thrown more during that span, according to Pro Football Reference.

Curiously enough, all four of Roethlisberger’s red zone interceptions this season have come on passes targeted for Brown. Because of that and especially how it looked like Roethlisberger was forcing the ball to Brown late in Sunday’s game, the Steelers quarterback might be asked this week if it’s possible he’s trying too hard to get the football to the league’s top wide receiver this season.

“It is a certain look. He (Shelby Harris) was in the spot where I have to read him until the very last minute, Roethlisberger added about his late Sunday interception against the Broncos that was intended for Brown. “He wasn’t the guy that affected the play. I threw it to the place I thought he (Brown) was going to be able to make the play.”

To end this post on a positive note, Roethlisberger has thrown 224 regular season red zone touchdowns during his career and only five other quarterbacks have thrown more dating back to his rookie season. 35 of those red zone scoring tosses went to Brown.