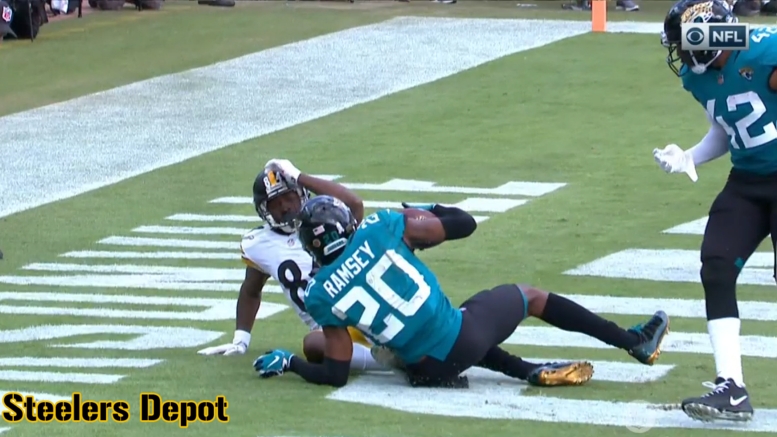 It’s pretty interesting that the Cincinnati Bengals can generally be as bad as they are, only ranking 12th on the season in points scored and owning a 5-5 overall record, yet still be the dominant team in the NFL in the red zone. To date, they have scored touchdowns on 23 of 29 red zone possessions, converting on 79.3 percent of their chances, the best in the NFL after Week 11.

That is after the Pittsburgh Steelers fell just behind, going two for three in scoring touchdowns in the red zone on Sunday against the Jacksonville Jaguars. They have now scored on 24 of their 31 trips inside the red zone this season for a 77.4 percent rate, the second-best mark in the NFL. They are the only two teams north of 75 percent, though there are seven teams above 70.

There are many factors that have contributed to the Steelers’ positive success in the red zone this year, not the least of which has been the play of the offensive line, which has helped to pave the way for eight of James Conner’s 10 rushing touchdowns.

The bulk of the scoring has come from Ben Roethlisberger though, unsurprisingly, which includes now three rushing touchdowns. He also has 13 touchdowns passes on red-zone possession (including a 22-yard connection to Antonio Brown after a penalty on the previous play knocked them back from the 12).

While he has done a great job of producing points in the red zone, however, three of the Steelers’ seven red-zone failures this season do trace directly back to some of the poor throws or decisions he has made, which resulted in interceptions, and thus no points at all.

His three red-zone interceptions tie for the second-most he has had in any season, behind only the 2006 season that was overshadowed by a motorcycle accident, an appendectomy, and a concussion. He threw five interceptions in the red zone that season as the Steelers went 8-8 in a Super Bowl hangover.

The first red-zone interception came early, in fact on just the third drive of the season. After completing a 27-yard pass to JuJu Smith-Schuster to attain a first down at the 18, he forced a pass to Brown on a scramble drill that was intercepted by Denzel Ward.

He was intercepted again in Week Five at the end of the first half against the Atlanta Falcons. On second and goal from the seven-yard line with 30 seconds to play (and two timeouts in-hand), yet again on a scramble drill, he forced a pass to Brown in double coverage that was intercepted by Damontae Kazee.

The third and most recent came on Sunday, once again looking for Brown. Working against Jalen Ramsey in man coverage from the 11-yard line on second down, Brown won a slight advantage, but Roethlisberger’s pass was a bit behind the play and the cornerback made a great play to take the ball away.