The Pittsburgh Steelers will play the Baltimore Ravens for a second time this season on Sunday and that contest will mark the second consecutive meeting between the two teams that running back Le’Veon Bell hasn’t played in. On Thursday, however, Ravens defensive coordinator Wink Martindale let it be known during his weekly media session that the Steelers not having Bell this season might not actually be a bad thing.

“There are a lot of stats [since 2015] that the Steelers are actually better without him,” Martindale said Thursday of the still AWOL Bell. “That might be why he’s riding a jet ski down in Miami right now.”

Ravens defensive coordinator Wink Martindale on absent Steelers RB Le'Veon Bell: "There are a lot of stats [since 2015] that the Steelers are actually better without him. That might be why he’s riding a jet ski down in Miami right now."

That’s quite a bit of shade that Martindale threw in Bell’s direction on Thursday and while the Steelers have indeed played well without their former second-round draft pick since 2015, as the graphic that CBS Sports posted during Pittsburgh’s Sunday game against the Cleveland Browns, the Ravens defense did have problems containing the Michigan State product three of the last four times they faced him dating back to that season. 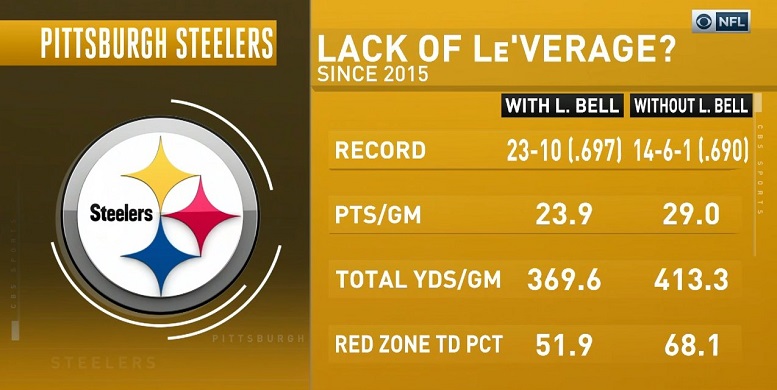 While Bell’s replacement so far this season, second-year running back James Conner, has played great at times in the team’s first seven regular season games, the University of Pittsburgh product only managed 44 total yards from scrimmage via 12 total touches in the Steelers 26-14 home loss to the Ravens back in Week 4. By the way, Bell’s lowest output for his entire career in games against the Ravens was 58 yards back in 2014 and the Steelers won that game 43-23.

In Sunday’s rematch between the Steelers and Ravens, Conner needs to register a much better performance than he did back in Week 4 if he wants to be on the winning team this time around. That will be a tough chore for sure as the Martindale-led Ravens defense is surrendering a league-best 88.25 yards from scrimmage per game to opposing running backs so far this season. In summation, a big Sunday afternoon from Conner might just result in Martindale throwing even more shade in the direction of Bell in the future.