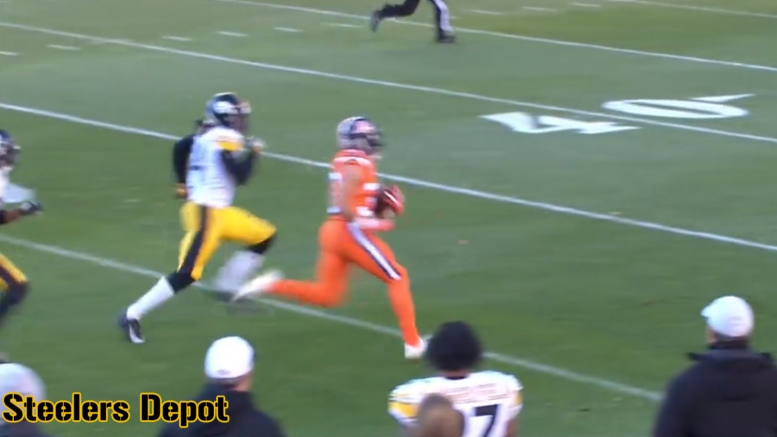 What would you do if you had a running back that was averaging eight yards per carry? If you’re the Denver Broncos, you would only give it to him 14 times during the game, even when you spend the majority of that time in a tie game or even leading.

Rookie undrafted free agent running back Phillip Lindsay saw just 14 touches during the Broncos’ victory over the Pittsburgh Steelers today, but he made them count, rushing for 110 yards, including his fifth rushing touchdown of the season, in his fourth start.

The 110 yards was a new career-high for Lindsay, who rushed for 107 yards in the second game of the season on just 14 carries as well. The Broncos are clearly pacing him as he has yet to have even 20 carries in any single game, just two games with more than 15.

Not only was it Lindsay’s second 100-yard game, it was the first 100-yard game that the Steelers defense has given up to any one running back during the 2018 season, and over the past 14 games extending into the tail end of the 2017 season.

But it’s worth noting that they comes off the heels of a 97-yard effort from Leonard Fournette just a week ago. Still, Fournette built his yardage off of early success and then struggled much in the second half. He only averaged 3.4 yards per carry.

Another second-year former first-round back, Christian McCaffrey, recorded the third-most rushing yards against the Steelers a week prior to that Jacksonville game, gaining 77 yards  and a rushing score on 14 carries, so individual runners have been trending upward against this defense for weeks now.

No runner consistently gashed them the way Lindsay did today, however, this in spite of the fact that his first three runs of the day, and three of the first four, were unsuccessful plays.

The one that was successful was a 32-yard burst, the longest rushing play the defense has allowed so far this season. Later, he would rip off gains of 14 and 12 on a drive that stalled, and an 18-yard gain late in the game, the latter on a drive he would cap off with a two-yard rushing touchdown.

Two of the Steelers’ worst games of the year in run defense have come in consecutive weeks, with Stephon Tuitt sitting out with an elbow injury. He was hopeful of playing this week, but was unable to practice.

Next up on the schedule is Melvin Gordon, one of the hottest running backs in the league right now with over 800 yards rushing and another 450-plus receiving, with 13 combined touchdowns on the ground and in the air. He is averaging over five yards per carry. Will the Steelers be ready?