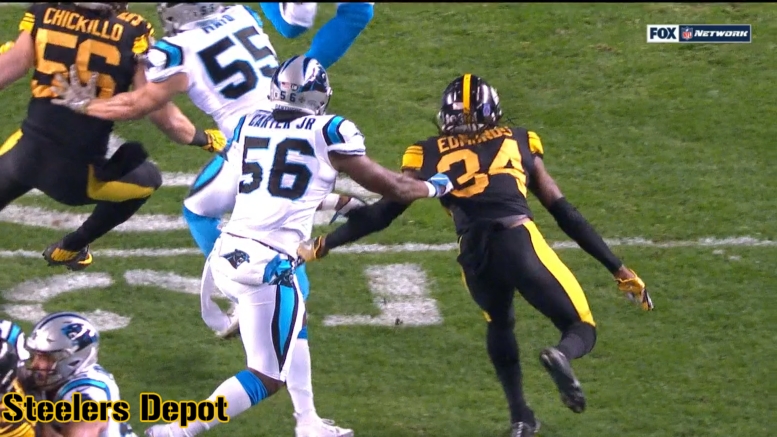 The Pittsburgh Steelers rarely seem to actually plan for rookies to start, but it has been happening more and more lately. The last rookie intended to start at the beginning of a season was Ryan Shazier in 2014, but Sean Davis in 2016 and T.J. Watt last season both did it as well. Terrell Edmunds this year is the latest, though his workload is beginning to be scaled back.

The first-round safety out of Virginia Tech was supposed to have an adjustment year with veteran Morgan Burnett brought in to start at strong safety, but the ninth-year player’s various soft-tissue injuries have left him sidelined for about half the season so far.

He has been back on the field since the bye week, however, and in the last game for the first time since Week Two began to rotate in at strong safety, leaving Edmunds on the sidelines. This move has been made not so much as an indictment of the rookie’s performance, but rather simply to ease his burden.

He struggled early, but has slowly begun to come into this own, and has actually played two of his better games of the season so far over the past two contests against the Baltimore Ravens and the Carolina Panthers.

That is the evaluation of Pro Football Focus as well, who checked back in with every team’s first-rounders after Week 10 to see where they stand in the site’s grading. Truth be told, they still have Edmunds graded lower than most safeties, currently with an overall grade of 55.6.

“Edmunds had a productive game against the Panthers in Week 10”, the entry reads. “He produced a quarterback hurry from his lone pass-rush snap and also logged three solo tackles, two against the run and one in coverage”.

A couple of weeks back, they felt that he had his worst game of the year against the Cleveland Browns, which dropped his season grade down to 53.8 from where it had been, climbing all the way up to 62.0.

“Edmunds has endured his fair share of struggles in his first year as a pro, but Week 8 was a low point”, they wrote after the Browns game. “On 64 defensive snaps, the former Virginia Tech linebacker [sic] logged one solo tackle and a tackle assist, but he also missed a tackle on a breakaway run. Edmunds ended the game with an overall grade of just 29.2 – the worst single-game mark of his career to date”.

Of course it ultimately doesn’t matter at all what Pro Football Focus thinks of Edmunds’ play. it has been far from perfect, and there has been some ups and downs along the way, but he has generally come to hold his own.

Still, I do believe it is for the best for the team and for his development that we see Burnett take on a bigger role in the defense, a process that seemed to already get underway last week. Edmunds looks like he may have a long career ahead of him, but too much too soon can also be a detriment. Hey, at least he’s graded higher than his younger brother.